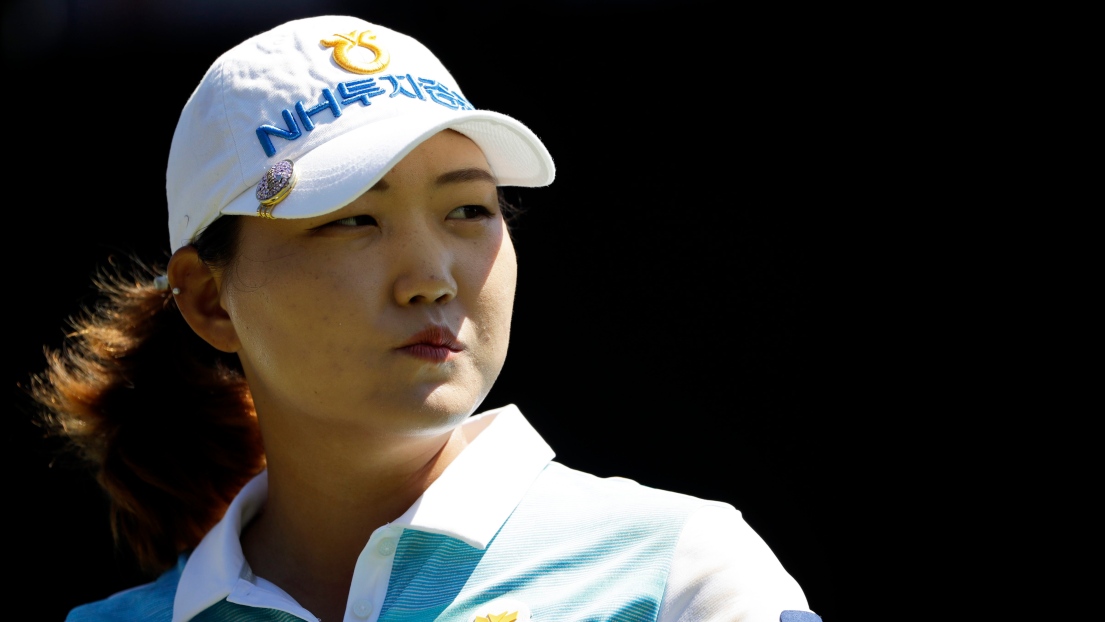 Mirim Lee's eagle chip set up the playoff she won at Mission Hills on Sunday.

Things got a little “chippy” Sunday at Mission Hills when it looked liked there was your basic two-woman showdown between Nelly Korda and Brooke Henderson.

But Mirim Lee, who hadn’t won in three years, chipped away at the lead before she finally pitched one in at the 72nd hole and set the stage for some overtime drama at the ANA Inspiration.

The final round looked like it boiled down to that Korda-Henderson duel that was taking on a match play feel.  Through 12 holes, Henderson worked her was to 15-under par with Korda on her heels at 14-under, Lee was looking up at both, she was 13-under through 13 holes.

Things took a big swing in Korda’s favor when Henderson made double at the 13th, pitching her third into a greenside bunker then missing a six-footer for bogey.  Korda then birdied the 14th, she got to 15-under and led by two.  Up ahead, Lee was now three back, still at 13-under.  But the South Korean pitched in from off the green for the second time in her round for birdie at 16.  She parred 17 then flew her second at the par five 18th to the back of the green.  It was then he pitched in for the third time, this one for eagle and a finishing score of 67 and a 15-under total.

Henderson made up for her double with birdies at 16 and 18 while Korda failed to make any birdies over the final three holes — as a result, three women posted 15-under and headed back to 18 for a playoff.

Lee saved her best for last and walked away with the ANA Inspiration title with a playoff birdie that stunned everyone — Henderson and Korda included.  Korda didn’t come close to birdie while Henderson chipped from the back of the green to six feet and pulled her birdie putt, leaving the door wide open for Lee who sunk her 15-footer for victory.

“I can’t believe it,” Lee said afterward as tears flowed down her face.

Truth be know, neither could anyone else.

But believe it — a chippy afternoon and a dive into Poppy’s pond for the 29-year-old who became a major champion.

Tommy Fleetwood was the highest-ranked player in the Portugal Masters, using it as a tuneup for this week’s U.S. Open.  But Tommy seemingly fell by the wayside until he came up with a furious rally on Sunday at the Dom Pedro Victoria Golf Course.

Fleetwood closed with a seven-under par 64 but his 13-under par total left him three shots short of winner George Coetzee of South Africa.

Coetzee secured his fifth European Tour title – and his first in Europe with a final round 66 on Sunday, two clear of England’s Laurie Canter, who also shot a closing five-under par 66.

Coetzee went bogey free, making crucial par saves when he needed them to notch the victory.

“I have always had a list of things I wanted to achieve in my career as a golfer,” he said after the win. “And originally I never thought I would get as far as winning on the European Tour, so ticking that box a while back was really nice, and then I started to realise that I was a bit comfortable playing back home and I needed to go to the next step and win away from home.

“And then I won in Mauritius, which still counts as a Sunshine Tour event, so I still felt like I needed to get off my continent and win something else. So I am just happy that I kind of ticked the box in the right order.

There were spectators on hand for the first time this past week at any sort of PGA Tour event as the Champions Tour went out to South Dakota for the Sanford International.

Miguel Angel Jimenez, The World’s Most Interesting Man, led from day one and went wire-to-wire to notch his second win of the year on the over-50 tour.  The Spaniard shot rounds of 65-66-65 at Minehaha Country Club to edge Steve Flesch by a shot.

Flesch eagled the par five 16th and shot 63, his best effort this season.