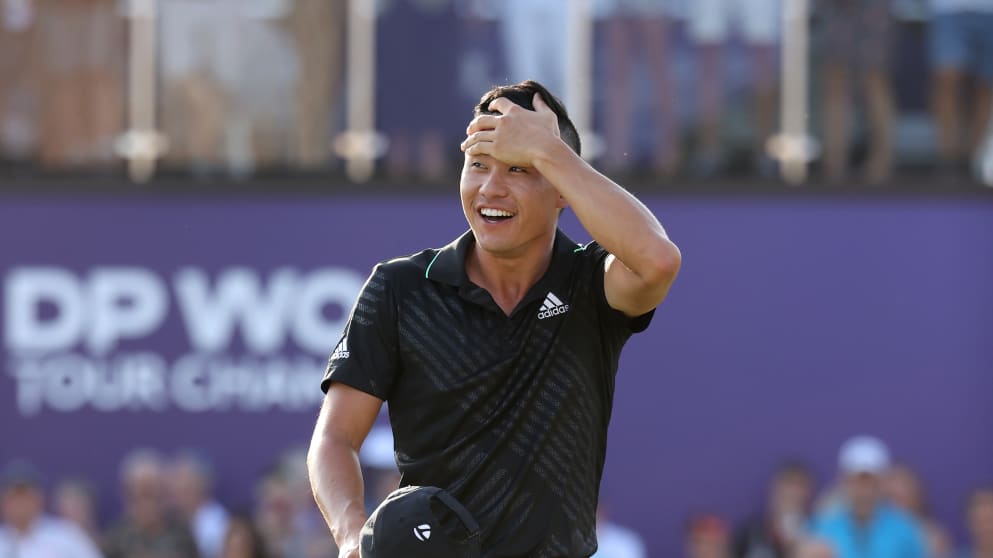 Collin Morikawa wiped out the field with four birdies over his final five holes.

When Collin Morikawa says he wants to win a tournament — it’s best to listen to what he has to say.

It wasn’t enough for the world’s No. 2 to win the Race To Dubai on Sunday — that was pretty much in the bag.  No, Collin wanted the Dubai Double — The Race AND the DP World Tour Championship.

The 24-year-old, two-time major champion put his foot on the gas over the final tough five holes on the Earth course and blew everyone away, including overnight leader Rory McIlroy.

While Morikawa showed off his magnificent ball-striking skills down the stretch, McIlroy crumbled like a wet paper bag.  Rory bogeyed three of his final four holes and blew his top in the scorer’s room afterward, ripping his golf shirt from the chest buttons to his right shoulder.  Rory’s final indignity may have triggered the shirt-ripping.  At 18, he missed way right, tried to go for the green, hitting a would-be hero shot over the trees.  It hooked too much and found the greenside stream.  Then after the penalty drop, Rory putted within three feet and missed the par attempt for an ugly closing 74.

Up ahead of Rory, Morikawa closed it out when hit the par five 18th in two and calmly two-putted for a closing birdie and a round of 66.  His 17-under par total was three clear of Matt Fitzpatrick and Alexander Bjork.

It was pretty much a given after 54 holes that Morikawa would bag the overall Race To Dubai.  No one else was close to him.  Fitzpatrick made a bit of a run late in the final round but back-to-back bogeys at 16 and 17 took him out of the hunt.

Morikawa was totally impressive.  He got off to a quiet start with six straight pars but got it in gear on the back nine.  The young American pointed to his birdie putt at the par four 12th as the spark that got him going.  “Starting off with six pars, especially with some birdie holes, wasn’t fun. I felt like I was hit some good shots and I wasn’t getting the breaks I needed,” said Morikawa.

“The putts weren’t dropping and I just told myself when I looked at the leaderboard after nine that I was still in there and I was still two or three back at that point and I just needed one spark.  After parring 10 and 11, after I told myself, you shouldn’t have done that; I knew something had to change. And 12, got a great break, thinning my second shot, made the putt, and that got the momentum started.”

A nice chip at the par five 14th left him an easy birdie putt there then he stuffed his approach at 15 to eight feet and made that.  At the par four 16th, he caught a fairway bunker but his a sweet approach for an easy two-putt par.  At the difficult, island 17th, he cruised a tee shot within 18 feet, rolled that in and followed it with a big fist pump.  He was feeling it.  A nice drive and yet another great iron shot into 18 made for an easy closing birdie.

Afterward, he collected the two trophies.  “It’s special, it’s an honor, really, to be the first American to do that (win the Race To Dubai) on The European Tour to put my name against many, many great Hall of Famers, it’s special. I get touched up just talking about that.”

At the other end of the spectrum was McIlroy’s bizarre behavior.  He spoke to no one after signing for 74 and tumbling all the way into a tie for sixth.  He was driven away from the club quickly with his shirt ripped all the way down to his right arm-pit.

As for Morikawa, he came in off a near four-week layoff and didn’t have his best stuff until the final nine on Sunday.

But he’s shown time and time again that he knows how to win and can handle the pressure of Sunday final rounds in big settings.

How did Collin rate his performance?

“Pretty good,” he said with a smile. “Look, the way my head is wired, I’m always looking for what’s next, but I’m going to try to enjoy this one. This one is special.”