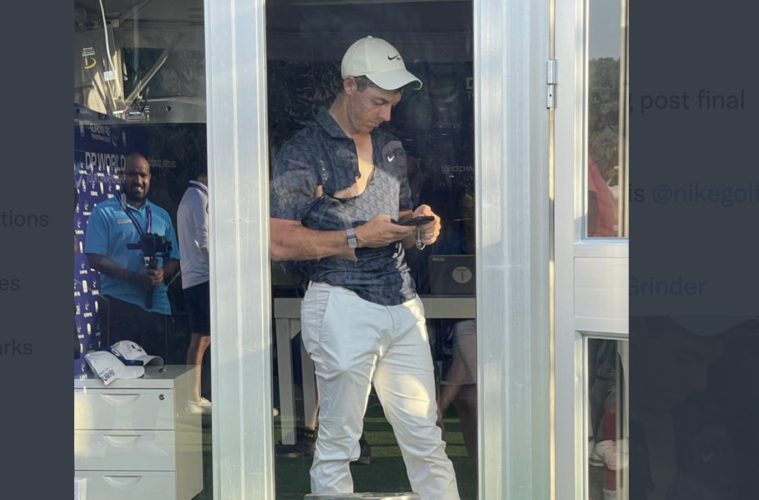 Rory did a number on his Nike shirt in the scorer's room.

Posted By: Tom Edringtonon: November 22, 2021In: In The DoghouseNo Comments

You can imagine Rory McIlroy walking out of the scorer’s room with his torn shirt on Sunday in Dubai and someone asking “What happened to your shirt??”‘

To which Rory might have given it one of those Rory “Ahhhhmmmmmm” moments then quickly saying something like:  “The dog did it!”

Nope, Rory can’t blame a random dog for his bizarre tantrum after his final round on Sunday at the DP World Tour Championship.  Rors simply went nuts.

There was a sequence of events and it started at the par four 15th hole, a 371-yarder where Rory pulled driver, smashed it, landing within 40 or so yards from the green.  All he had was a little flip wedge shot and it caught the flagstick square — bouncing all the way back into a greenside bunker.  Rory was short-sided and left his bunker shot on the fringe.  Two putts from there and his meltdown was beginning.

At the par four 16th, from about 24 feet, Rory blew his first putt about six feet past the cup.  You knew what was coming next.  He missed and took a second straight bogey.  After par at 17, Rors blew his tee shot right at 18, nearly out-of-bounds.  He went for the green — up and over the trees, hooked it a bit too much and found a stream that runs along the left side of the green.  His drop left him putting from about 45 feet and his approach stopped just inside three feet.  Easy par, right?

Wrong.  Rory suffered one last indignity by missing that putt as well.  He shot 74.

Then came the shirt-rage after signing his scorecard.

Perhaps Nike can come up with a new catch-phrase — JUST RIP IT!