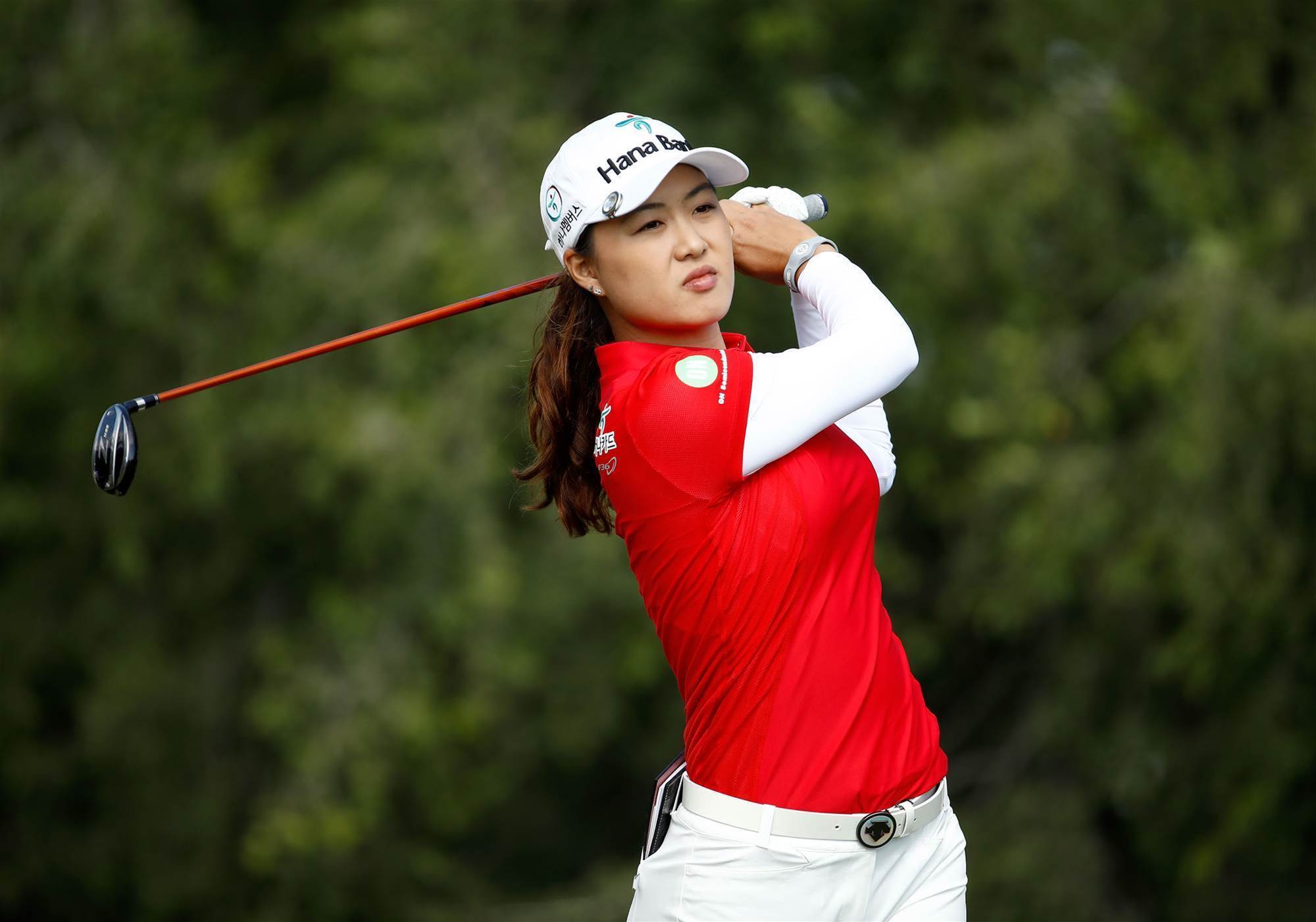 Minjee Lee shot 64 then won her first major in a playoff.

The Evian Championship was Jeongeun Lee6’s to lose on Sunday at the Evian Golf Resort and that’s exactly what she did after suffering an epic collapse over the first nine holes of the final round.

After shooting rounds of 66-61-68, Lee6 found herself with a whopping five-shot lead over American teenager Yealimi Noh.  She was six in front of the always-dangerous Lydia Ko and seven clear of Aussie Minjee Lee, who had never won a major.

After a perfect start with birdie on her opening hole, Lee’s front nine went to hell in a hand-basket starting with a bogey at the third.  Then came another at the fourth and yet another at the fifth.  The bleeding didn’t stop there, bogeys at the eighth and ninth dropped her all the way back to 14-under par and she was looking up at Noh, who got to 15-under at the turn.

Noh cooled off and Lee stepped up her game.  She was three-under at the turn then made a birdie run to the clubhouse — she made three straight starting at 14 then birdied the par five 18th to finish seven-under for her round (64) and 18-under for the tournament.

It looked like she’d win easily until Lee6 picked herself up from her front nine disaster.  She birded the 12th but was still three behind Lee with three to play.  All she did was birdie in to tie Lee at 18-under with a closing even-par 71.

Noh had a chance to make it three at minus 18 but she failed to birdie the par five 18th.

Lee6 and Lee (no numbers) headed back to 18 and it didn’t take long to end it.  After both hit good drives, Lee6 dunked her second into water short of the green.  Minjee put her second shot on the green and it was virtually over.  All Lee6 could manage was bogey and a two-putt birdie put Lee in the winner’s circle where Lydia Ko drenched her with champagne.

Day’s best round went to Ireland’s Leona Maguire. Her 10-under 61 tied the lowest round ever by a female or male in a major — two days after Lee6 shot 61 in the second round.  They share the record with South Korea’s Hyo Joo Kim, who shot 61 at this event in 2014.

Stephen Dodd hadn’t played much golf in the past 18 months and the man who came out of nowhere, showed up in a big way at Sunningdale late Sunday and birdied the 72nd hole to win the Senior Open Championship.

The 55-year-old from Wales found himself tied for the lead with Spain’s Miguel-Angel Jimenez standing on the 18th tee.  Jimenez had just parred the 18th, signed for 65 and posted 12-under for the tournament.

Dodd hit a brilliant approach that stopped just 10 feet from the hole.  With Jimenez watching, he calmly rolled in the birdie putt for a closing 68 and a winning 13-under par total.

It was his fourth and certainly biggest win since he turned 50.

“I’m not sure it’s sunk in yet,” he said afterward. “It’s been quite a tough day. Wasn’t playing great. So I’m sure on the drive home I’m reflect on it all and I’ll be a very happy person when I get back home later tonight.  This could be the only chance I get to win, so tried my best to hole it (final birdie putt).  Thankfully for me it went in, so it was a nice way to finish for me.

“Just wanted to try and enjoy it,” Dodd explained..  “I said yesterday I’ve not played any competitive golf – well, one tournament in 18 or 19 months, so there’s no real competitive golf behind me, so I didn’t know what to expect this week, and even today, I didn’t play great today, like a few of the previous days, so I just ground it out and made a few silly mistakes and made up with a couple decent shots and some putts.”

Dodd was a good frontrunner despite his recent lack of tournament play.  He headed into the final round with a two-stroke lead after tying both the course record and the lowest round in Senior Open history with an eight under par 62 on Saturday.  He started the final round with birdie at the first to get his run going.

Darren Clarke’s final round 67 earned him solo third at 11-under par.

Nacho Elvira of Spain took a six-shot lead into the final round of the Cazoo Open at Celtic Manor on Sunday and by the 18th hole, he had wasted all six shots.

He came to the 18th hole needing just two putts for par and his first European Tour victory but his missed a short par putt and the closing bogey for 71 put him at 16-under, tied with South African Justin Harding, who vaulted up the leaderboard with a bogey-free 65.

Elvira and Harding headed back to 18 for the playoff.  Both hit the green in three Elvira missed a birdie chance to win it from nine feet, Harding missed a four-footer for par to hand the victory to the 34-year-old Spaniard.

“It means the world,” lvira said afterward.  “That’s what we practice for and what we strive for.  We try to win, to be at the best level on the European Tour and play with the best. It means the world to me.”

He added: “What am I doing to myself?  I’m speechless right now to be honest.  I thought I had it all pretty under control but to be honest I got pretty nervous on the last couple of putts on the regular 18.  I was more calm in the play-off than I was on the 18.  “It’s a shame to see someone miss a putt, I suppose they felt the same for me when I missed but I can’t believe I won.”