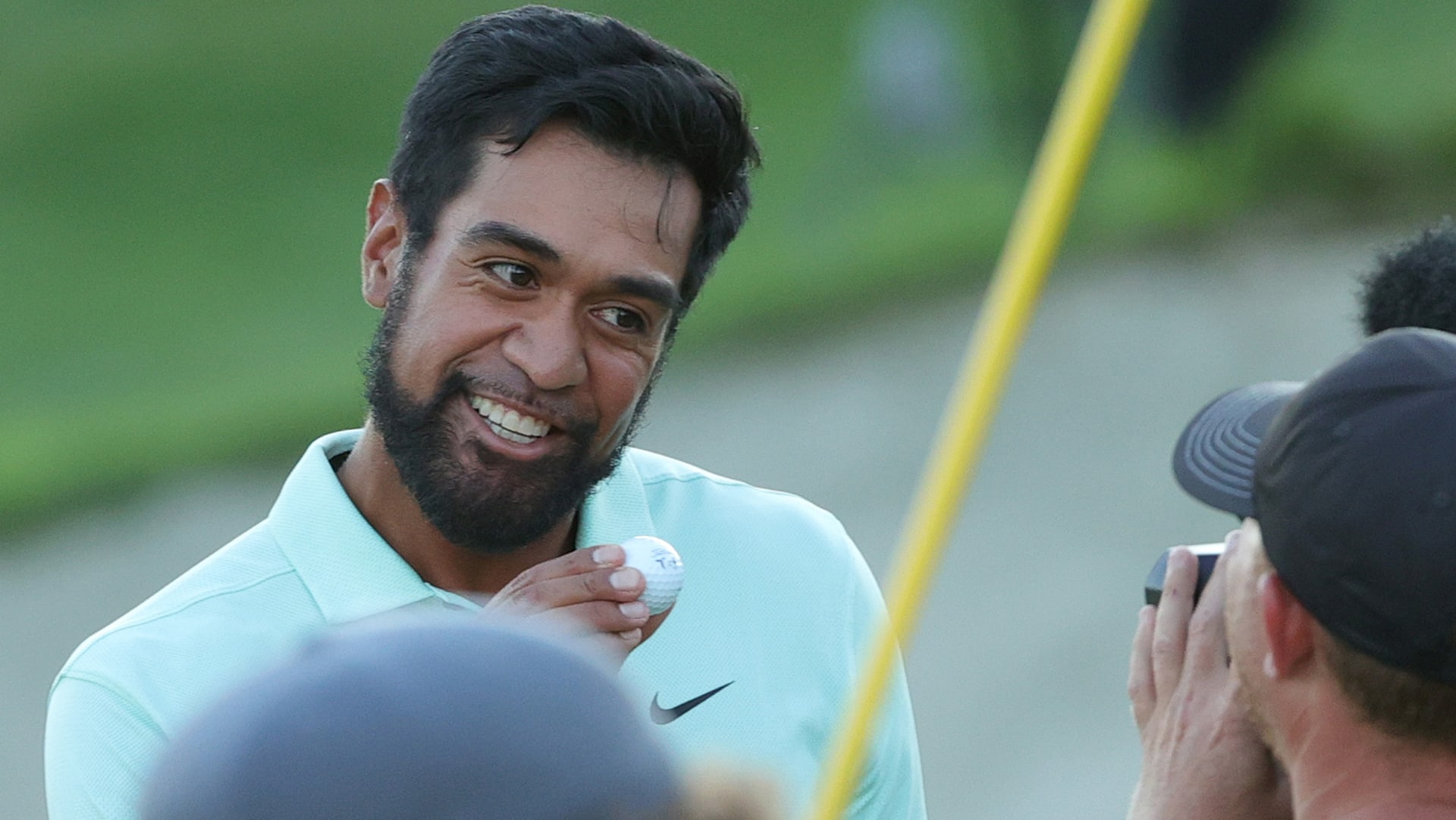 It took Tony Finau nearly 2,000 days to get his second PGA Tour win.

The world’s most long-overdue golfer came through in a big way on Monday.  Tony Finau has finally won a big one, only his second PGA Tour event, but his victory at the Northern Trust was a popular one and after 1,975 days — a long time coming.

This was no Puerto Rico Open, mind you, no it was the first event in the FedEx Cup playoffs and the over-talented, under-achieving Finau, came through in spectacular manner, overtaking world’s No. 1 Jon Rahm then going overtime to flatten pesky, messy-mullet-sporting Cam Smith on the first playoff hole at Liberty National.

It was a victory for good-guys everywhere because Finau is one of the true “good-guys” on the PGA Tour.  He has persisted and worked hard to find that second win.  His first came nearly 2,000 days ago in Puerto Rico, a lot has changed in golf and around the world in that time span.  Finau’s Achilles Heel has been his short game and putting but he’s worked long and hard on that and the results were evident at this storm-delayed, big-time event, across the river from Manhattan in sight of that amazing New York City skyline, complete with the Statue Of Liberty in the harbor.

Tony came through where he has so often faltered — and that would be on the final nine holes.

Jon Rahm was looking every bit the world’s No. 1 through eight holes. Birdies on both the front nine par fives got him to 18-under.  He had a pretty routine eight-footer for birdie to get to 19 but missed, still, he was in control.  At the 10th, he missed another short birdie putt, this one from just five feet — a stark omen of things to come over the final eight holes.

Up ahead of Rahm and playing partner Cam Smith, Finau was hard at work.  He was only one-under at the turn, 15-under for the tournament.  “I knew I had to get to 20 (under),” Tony would recount afterward.  He stuck his approach at the 12th to three feet but the shot of the day, the one that would set the path to victory, came at the par five 13th.  After another one of those monster Finau drives, Tony had just 217 to the hole and hit a perfect six-iron that parked itself just three feet from the cup.  His improved putting stroke easily handled that eagle putt.  He was 18-under, tied for the lead.

Tony didn’t stop there.  At the tough par three 14th, he holed a 30-footer for birdie.  A 30-foot Finau birdie putt used to be an endangered species.  Monday it wasn’t.  At the 16th, he hit another gem of a second and holed a four-footer to reach 20-under, where he thought he needed to be.  He fought past a wayward drive at 17, made par then at 18, after a 20-minute wait on the tee box, he launched another perfect drive — center of the fairway.  He lost his approach right in a deep greenside bunker and blasted to six-feet — a length that has tormented him constantly and kept him out of the winner’s circle too many times to mention.  This time he hit a confident, par-saving putt that put him in with a 65, thanks to a 30 on the back nine — 20-under posted.

Behind him, Rahm was faltering.  The world’s No. 1 found trouble in a fairway bunker at 15 — which led to bogey.  At the 16th, where Finau hit an amazing pitch for birdie at the reachable par four — Rahm was greenside in one but clanked his second — leaving him 30 feet and that meant no birdie.  Yet another fairway bunker at 18 doomed Rahm to another bogey and two-under par 69 (18-under) meant solo third, a spot Tony Finau knows all too much about.

While Rahm failed, Smith didn’t.  Birdies at 12 and 13 then another at 16 got him within a shot of Finau’s 20-under total.  At 17, Smith’s approach stopped within seven feet and just like that, he tied Tony.  Finau watched at the 18th after Smith hit his second to 24 feet with that left for the win.  As fate would have it, he missed and headed for an overtime date with Finau.

The playoff didn’t take long.  Finau hit yet another monster drive at 18 then watched as Smith virtually ended it — his drive went right-of-right, out-of-bounds.  After that, it was easy work for Tony.  He put his second within 25 feet, putted to three feet then putted out to save Smith the misery of having to hole a 12-footer for bogey.

Family man Tony Finau was finally, at last, after all this time — THE WINNER.

“It feels amazing. It took just about everything I have. We had a 20-minute wait (on 72nd tee) which wasn’t ideal. I just fought. This is pretty cool to be standing here again and winning a golf tournament.”

Great win and a breakthrough for The Nice Guy — Tony.