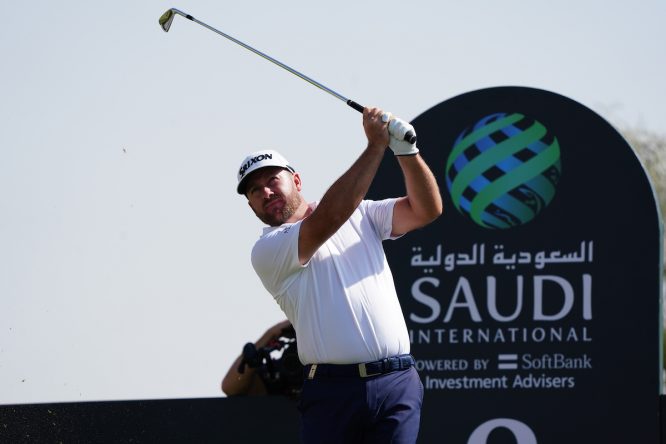 Graeme McDowell's 66 carried him to the 54-hole lead in Saudi Arabia.

Your surprise 54-hole leader at the Saudi Invitational is none other than 40-year-old Graeme McDowell.

The former U.S. Open champion carefully maneuvered his way through the afternoon winds at Royal Greens Golf Club to take a one-shot lead with just 18 to play.

McDowell came up with four back-nine birdies after a ho-hum every par front nine.  He went blowing past overnight leader Victor Perez and will play in the final twosome on Sunday with Frenchman Victor DuBuisson.  DuBuisson tied world’s No. 1 Brooks Koepka for the day’s low round with a five-under par 65 that moved him into solo second at 11-under par.

Gavin Green, who trailed overnight leader Perez by a shot at the start of the day, managed only an even par round but is still within striking distance at nine-under.

Dustin Johnson came out firing on all cylinders to start his day — D.J. made four straight birdies to get to nine-under at the turn but was derailed by three bogeys on the back nine.  He finished with 68 and will start the final round at seven-under par.

Koepka had seven birdies on his card to get to six-under and move inside the top 10 along with fellow American Phil Mickelson.  Mickelson, who is battling tendonitis in his left thumb, shot 68.