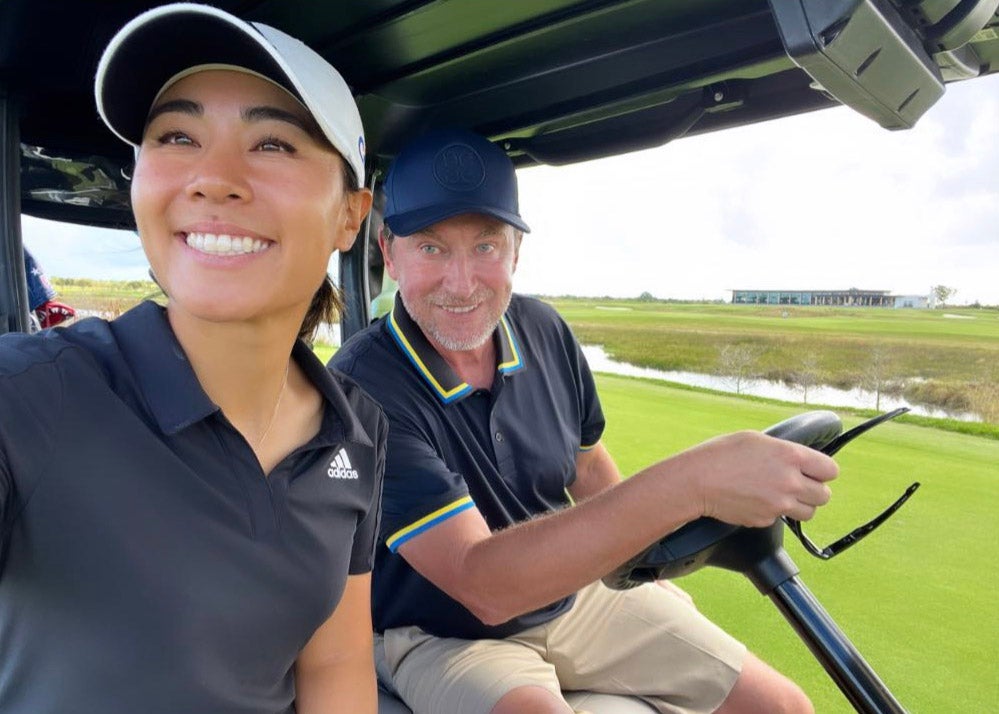 Danielle Kang got in a round with Wayne Gretzky at Michael Jordan's course.

Gretzkys Relocate To Palm Beach County (With All The Golf Stars)

The Great One, Wayne Gretzky, was sighted at Michael Jordan’s extravagant Grove XXIII get in a round of golf with LPGA star Danielle Kang.

So what’s the Great One doing in Palm Beach County?  He and wife Janet are moving there, obviously to be a little closer to daughter Paulina, perhaps soon-to-be son-in-law Dustin Johnson and the couple’s young child — a Gretzky grandchild!

Wayne and Janet recently put their palatial California digs in Thousand Oaks on the market to the tune of $22.9 million.  No doubt the Altman brothers (Million Dollar Listings L.A.) were tryin to land that one.

Gretzky joins a host of celebrity athletes and golfers in Palm Beach County.  In addition to D.J. and Paulina, Tiger Woods is up on Jupiter Island where Phil Mickelson has bought an oceanfront lot and preparing to build what should be an outrageous mansion.

You may or may not recall that after last season, Buffalo Bills quarterback Josh Allen bought custom-fit Callaway clubs and bags for all his offensive linemen and also threw in golf lessons as well.

Seems Arizona Cardinals QB Kyler Murray thought it was a great idea and he followed Allen’s lead this year.

For Christmas, Murray bought each member of his offensive line customized white leather golf bags and a set of custom-fit clubs from True Spec Golf. The bags each have the players’ names and numbers printed on the front in Cardinals red.