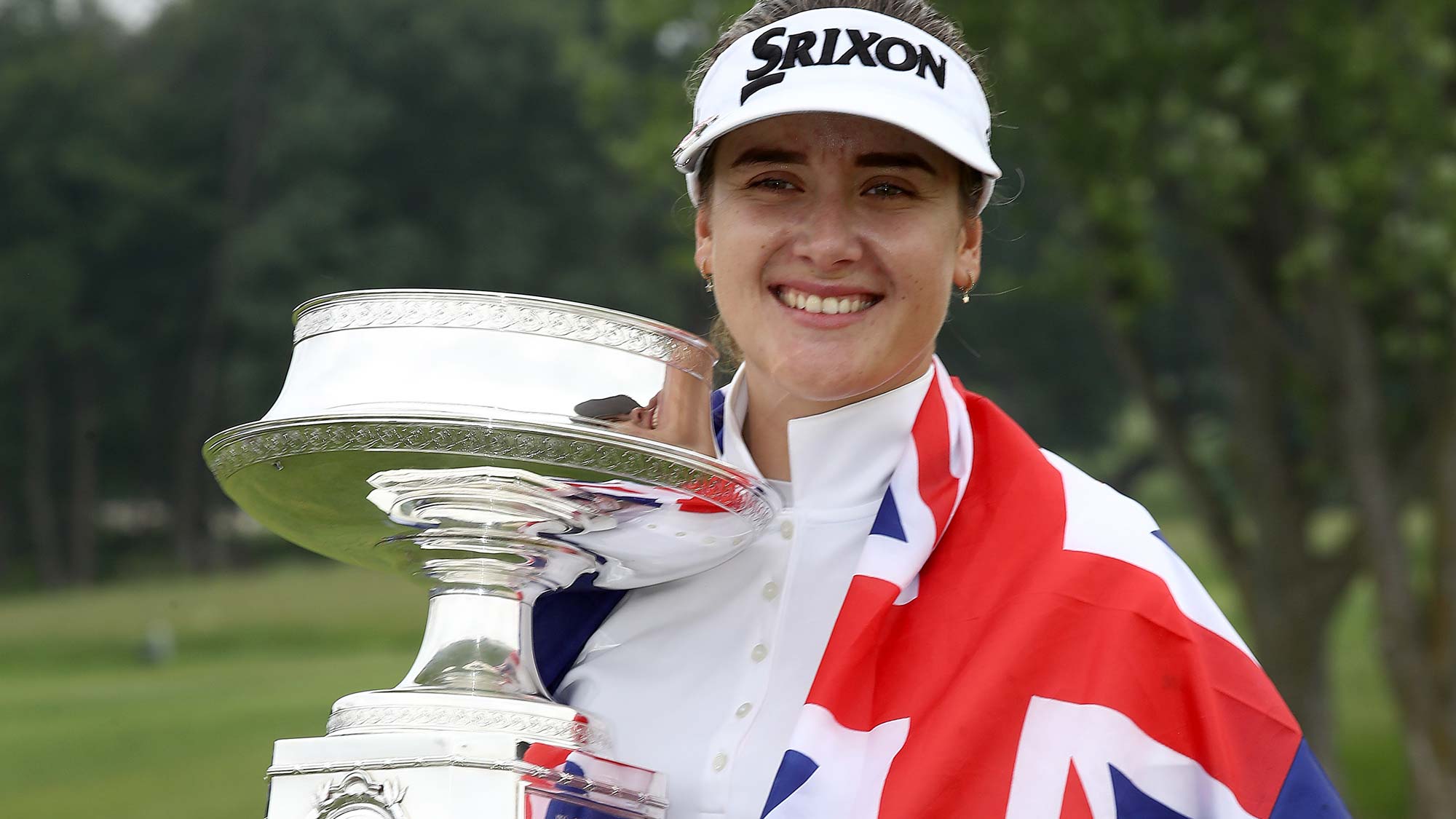 Hannah Green shows off the hardware, draped in the Australian flag.

There was no midnight clock for this Cinderella.

No, this Cinderella from Down Under got to stay for all 72 holes, her time did not run out and Hannah Green pulled off the stunner of the year in women’s golf.

This charming 22-year-old Aussie did what no one has ever done in women’s golf — she went wire-to-wire in a major championship for her first career win.

The Women’s PGA Championship belongs to Hannah Green because she earned it under the toughest of circumstances.  She slept on overnight leads for three nervous nights then had to go face-to-face with one of the game’s most dangerous players.  Ariya The Terror From Thailand Jutanugarn is a lethal combination of power and finesse but Green stared her down then survived a run from the defending champion late Sunday to get the job done.

In the end, it was Green’s silky putting stroke that proved the difference.

Her final round got off to a good start and after building a three-shot lead, she saw it cut to a single shot by the 12th hole.  But the challenge would not come from Jutanugarn.

Jutanugarn swept every important LPGA honor last year, taking the Rolex Player of the Year Award, the Vare Trophy for low scoring average, the Race to the CME Globe and the LPGA money title.

“The most daunting thing is knowing how far she hits it,” Green pointed out.  Even the best have bad days and Jutanugarn fell apart over the final nine holes, shot 40 coming hole and her 77 was as stunning as Green’s victory.

Nelly Korda and defender Sung Hyun Park would press Green.  Korda had it to seven-under through 14 but an untimely bogey at the par five 15th ended her hopes.  Park was seven-under and staring at a not-difficult nine-footer at the par three 17th.  Green had just canned a 15-footer for a much-needed birdie at the 16th and Park didn’t even hit the hole with her effort.

Green’s routine par at 17 gave her a two-shot lead standing on 18 tee.  After her drive found the fairway, she watched as Park holed a 16-footer for birdie at 18 to close the gap to a single shot.  Green, standing and waiting, knew what she needed.  From 182 yards she hooked her second into the left greenside bunker, leaving her an uneasy up-and-down to win it all.  She hit a near-perfect trap shot, leaving her a nervous four-footer for the win, a final round of even par 72 and a nine-under par winning total..

No worries, as they say in her homeland.  She poured it right in the center and made history and was appropriately doused with a beer shower by her mentor — Hall of Famer Karrie Webb and a host of other young Aussie up-and-comers who followed her all day and were most vocal in their support on a wet, soggy day with intermittent rain.

Green soaked it all in afterward.

“It’s awesome. I’ve always wanted to win in front of an Aussie crowd. I felt even that’s what it was like today. Anything to just be winning in Majors the first event.”

Green recounted her nervous final hole.  “I was watching the leaderboard and then on 18 I heard the cheer for SH so I knew the situation, I knew I needed to par 18 but I think the birdie putt on 16 was huge just to give me that gap coming down 18, and I mean I knew 18 was a tough pin position but I know the girls are a lot longer than me and have shorter clubs in, they could actually go for it. I had to just try and play it up the green on the right.”

She survived her wayward second and was overjoyed.

“Yeah, I just can’t believe I’m here right now. I can’t believe I’m in this position right now. I mean I’ve always wanted to win an event and to win a Major Championship as my first event is crazy. I wasn’t really feeling as confident at the start of the week with my swing, especially with the result last week (missed cut). But I guess things turned around and I had things go my way. That always helps for sure.”

Green stayed in a home rented by Webb with all her fellow Aussies staying there, about 10 in all.

She said they kept her loose, they didn’t talk golf in the evenings.

No, she was as cool as the other side of the pillow — all week.

This Cinderella from Down Under didn’t have to run home.  She stuck around until the very end and she wrote her own happy ending.