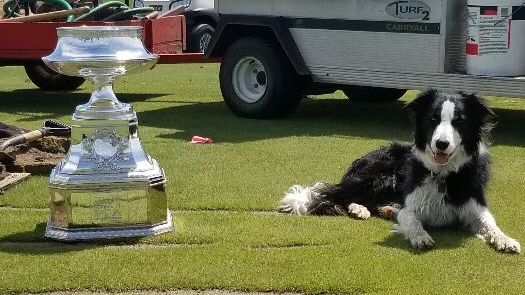 Posted By: Tom Edringtonon: June 24, 2019In: In The DoghouseNo Comments

Hazeltine National is one of the nation’s most famous and storied championship golf venues.

The course has earned even more respect from The Dog House.

The greatest thing about Hazeltine isn’t all the great golf holes — it’s the fact that the course has it’s own “official” dog.

Ozzie is the top dog at Hazeltine, he spends his time with the grounds crew, the superintendent is his human.

Ozzie was in the spotlight last week at the Women’s PGA Championship and in the photo above, he took time off from his daily duties to pose with the trophy.

So to honor Ozzie, the Dog House will put a picture of him up on the walls so the rest of the dogs can have their own golf course mascot aspirations.

So Dog House love goes out to Hazeltine and Ozzie the official golf course dog.