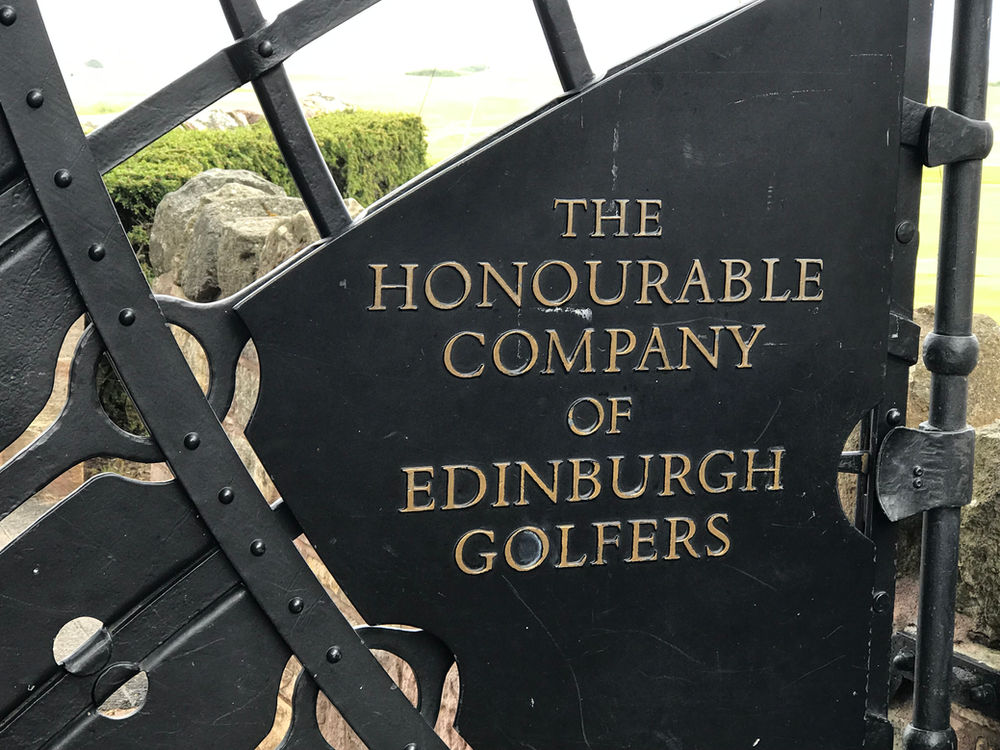 This unmistakable sign lets you know you've arrived at Muirfield.

It’s an unassuming, leisurely drive through the country outside Gullane in the East Lothian region of Scotland but when he walk down the narrow road to the entrance and see the iron gates with “the sign” — you know you’re at one of the historically important courses in all of Scotland — Muirfield.

The sign on the gate tells you it’s the home of one of the oldest of golf’s founding societies — The Honourable Company of Edinburgh Golfers.

Muirfield is one of Scotland’s oldest and certainly most respected private clubs.  It’s often compared to the Augusta National Golf Club here in the good old US of A.  And like Augusta National — they are pretty darn selective in their membership process.  Fact be known, there are multiple members of Augusta National who are members at Muirfield.

It is steeped in hundreds of years of golf tradition and it’s a big coup for women’s golf that it is the host club for this week’s Women’s Open Championship.

A round at Muirfield should be on every golfer’s bucket list.  The club welcomes outside play on Tuesdays and Thursdays but it takes long-term planning — at least a year — to land one of those starting times.

The caddies are really good — slow play is not tolerated and the caddies make sure you move along.

Muirfield has hosted 16 Open Championships.  Harry Vardon, Henry Cotton, Walter Hagen, Gary Player, Lee Trevino, Tom Watson and Jack Nicklaus all won here.  Nick Faldo won twice at Muirfield.  Nicklaus thought so highly of it that he named his home course in honor of it — Muirfield Village in his hometown of Columbus, Ohio.

When we played Muirfield in October, the third tier of rough was punishing — it most likely means a lost ball as four caddies and four players won’t be able to find the errant shot.  Greens are big and bunker complexes are extensive.

Coolest part of the Muirfield experience is the luncheon buffet in the historic clubhouse.  No pictures allowed and the dress code is coat and tie.  Your best behavior is required — it’s all about decorum.

As for the club itself — Old Tom Morris designed the layout in 1891 and Muirfield hosted it’s first Open Championship in 1892.  The heritage of the “Honourable Company” dates back to 1744 and is descended from the Golfers At Leith.

Formerly a “Men Only” membership, Muirfield has opened its membership to women and has shown its modern thinking by hosting the best women players in the world for this week’s playing of the Women’s Open Championship.