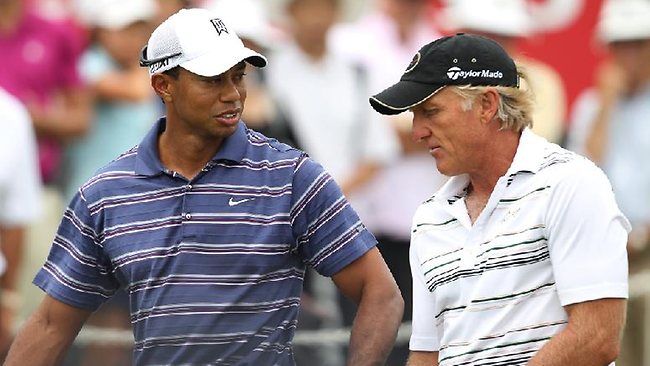 You may or may not have heard that Tucker Carlson from Fox summoned The Lamest Commissioner In All The Land (aka Greg Norman) and The Great White Snark (aka The Great White Fish Stick) spilled the beans on the mega-offer that the dastardly Saudis made to The Great Stiney (aka Tiger Woods agent Mark Steinberg) in attempt to lure Tiger Woods to the LIV exhibition series.

Norman confirmed the offer came prior to him being hired as The Lamest Commissioner In All The Land by the aforementioned Saudis.  The number?  It was in the $700-$800 million neighborhood.

“Look, Tiger is a needle-mover, right?” Norman told Carlson. “So, of course you are going to look at the best of the best. So they had originally approached Tiger before I became CEO. So, yes, that number is somewhere in that neighborhood.”

Norman had previously said that Woods rejected a deal that was “mind-blowingly enormous” and in the “high nine figures.” He verified that both Woods and Jack Nicklaus didn’t sign on with LIV because they wanted to preserve their “generational legacies.”

Tiger basically slammed the LIV and the  at the 150th Open Championship, saying:

“I think that what they’ve done is they’ve turned their back on what has allowed them to get to this position,” Woods said of the players who had left the PGA Tour.

“I can understand 54 holes is almost like a mandate when you get to the Senior Tour. The guys are little bit older and a little more banged up. But when you’re at this young age and some of these kids – they really are kids who have gone from amateur golf into that organization – 72-hole tests are part of it.”

The regular season for the PGA Tour ends this week at the Wyndham.  The guys “on the bubble” of the top 125 will try and secure their spots in the FedEx Up playoffs as play begins Thursday at the Sedgefield Country club.

The PGA Tour also has finalized it’s entire schedule for the 2022-2023 season with 47 events, changes to the FedEx Cup format and huge purse increases.

The Tournament of Champions is the start of the year and the purse there has risen to $15 million for the winners-only first event.

The money increases carry over to the West Coast swing.  During a run of six weeks, there’s around $100.5 million available.

Starts with Tiger Woods’ Genesis Invitational and goes to the WGC Match Play.

The Players will have total money of $25 million.

Other notable changes include:

No WGC-China, so Bermuda has full points and a Masters spot.  The CJ Cup is now at Congaree, named THE CJ CUP in South Carolina.  The Farmers finishes on Saturday again.  The Rocket Mortgage goes from late July to late June and the co-sanctioned Scottish Open is back as well.

The Bermuda Championship will see its winner take home Tour status, $1.17 million, and an invite to Augusta National.

The 2023 FedEx Cup was overhauled.  The Tour playoffs will follow the same three-tournament structure as this season, with the FedEx St. Jude Championship preceding the BMW Championship, which precedes the Tour Championship. However, the fields will look very different. Only 70 players will qualify for the FedEx Cup Playoffs, down from the 125 that will take part this year. And from those 70 — 50 will advance to the BMW Championship, and then 30 to the Tour Championship.  The 50 who make it to Olympia Fields for the BMW are expected to be featured in a high-money series of international events in the fall of 2023.