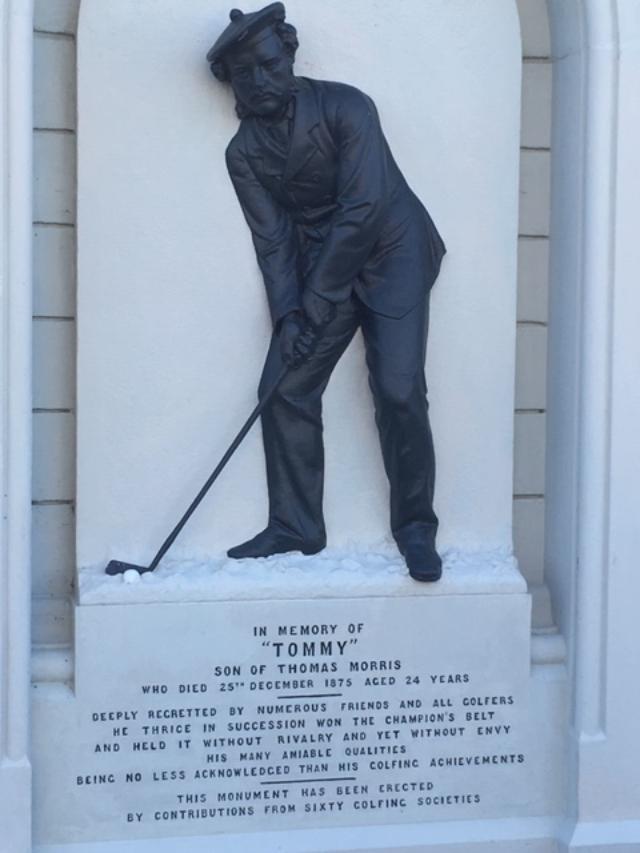 The resting place of Young Tom Morris is a must-see in St. Andrews.

St. Andrews is a town like no other, a place where history seeps from every part of the small city.

We’re 30 miles northeast of Edinburgh on the east coast of Fife.  It dates back to the mid-700s.  Ancient?  You bet.

We’re making our way through the town, past St. Andrews University, heading for the ruins of the ancient cathedral, once the largest in Scotland.  More on the cathedral in our accompanying  “In Other News”  story.

We searched for the special place within the burial grounds when we first came here two years ago.  Something kept telling me which way to go, toward the sea, toward a far, secluded corner.

Today we know exactly where to go and head for the resting place of Young Tom Morris.

His monument is impressive, as was his short life.  The inscription tells us he died on Christmas Day, 1875 at the too-young age of 24.

He was golf’s first young prodigy.

The inscription sums it up for us:

Deeply regretted by numerous friends and all golfers.  He thrice in succession won the champion’s belt and held it without rivalry and yet without envy.  His amiable qualities being no less acknowledged than his golfing achievements.

What that inscription doesn’t tell is that Tommy won the Open Championship not “thrice” but actually four successive years — 1868, 1869, 1870 and 1872.  They retired the belt after he won three straight and didn’t have a championship in 1871.  They had to come up with a replacement “trophy” and it was The Claret Jug.  He won that in 1872 and his name was the first to be inscribed on The Claret Jug.

He did all that by age 21 — a feat that will never be equaled.

Tommy played the game like no one else.  He had tremendous distance with his woods and irons.  He single-handedly led a huge increase in the game’s popularity in Scotland.  Some of his challenge matches attracted thousands of spectators from all over the country.  London newspapers and magazines sent correspondents to Scotland to chronicle his matches in the 1870s.

He had no equals and yet there was not a great deal of envy.  Tommy had a huge personality, he was well-liked and his contemporaries knew they had to raise the level of their own games to compete with him.

He and father Tom (Old Tom Morris) were in a match against the Park brothers — Willie and Mungo, at North Berwick.  Tommy received a telegram telling him to return home, quickly.  His wife Margaret was in labor, a difficult one.  By the time he got home, both his wife and newborn infant were dead.

Official cause of his death was pulmonary hemorrhage and resulting apnea.

To this day, everyone truly believes Tommy died of a broken heart.

So before we hit one golf shot on this trip, we bow our heads and honour one of the game’s greatest, the man who might have been the best of all had he lived longer.