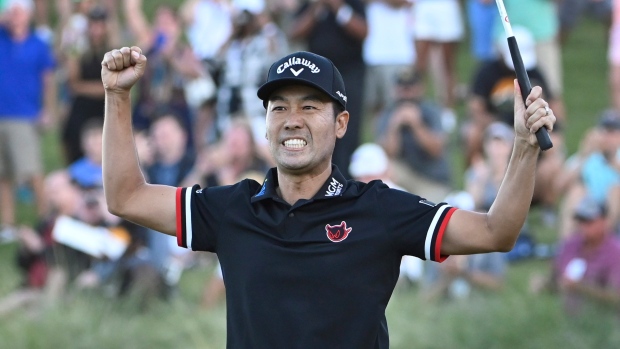 Kevin Na survived a major disaster on the back nine yet still managed to win.

Kevin Na had things completely under control Sunday afternoon at the TPC Summerlin.

Things were going pretty darn well for Na over the first nine holes at the Shriners Hospitals For Children Open.  Three birdies over the final four holes on the front got him to 24-under and he was most likely sitting on the winning score.  Nine pars would be just fine and Na is great at making pars.

He got himself into the lead with a magical couple of days on Friday and Saturday when he shot 62-61 to take a two-shot lead into the finale.

And yes, he was cruising.

Then golf happened.  Then the 10th hole happened.

He hit a poor drive, wound up short of the green in two, over in three, finally on in four and three-putts later saw himself walk off with a triple-bogey seven that put seventh-ranked Patrick Cantlay on the path to victory.

“As good as I was playing, there was no doubt I was going to win. All of a sudden I felt like the underdog,” Na said of that misery on the 10th hole.  His short game short-circuited for a moment and he took five shots from 50 yards short of the green. “It was hard to shake off,” Na later admitted. But shake it off he did.

The par five 16th was playing incredibly easy.  Cantlay just had just 187 in, Na was looking at 202.  Na fanned his second, it caught some dry land then headed for the rocks and eventually into the water guarding the green.  Cantlay hit a driving range eight-iron into the middle of the green, watched Na make bogey, then tapped in for birdie and suddenly Cantlay led by one with just two holes to play.

Na had suffered yet another disaster.  No way he wins, right?

Then golf happened again.  Cantlay pulled his tee shot at the par three 17th into the water, Na didn’t do himself any favors either — he bailed right into a greenside bunker that left him little hope of making par.  Cantlay chipped inside a foot and made four.  Na had to play away from the hole and faced 23-feet for par.  Looked like bogey all day long.

Na took his time, lined it up, hit it well then watched it fall in, barely.  He gave it a huge fist pump and it would prove to be the clutch putt of the day.  “For that to go in, I knew I had a chance, no doubt we were going extra holes,” Na later admitted.

On the last hole, Cantlay crushed his drive, he’d have just 113 in compared to 162 for Na.  Both his crummy approaches, all things considered, both made pars and as Na predicted, extra holes.

The second time down 18 saw both hit it close — Cantlay to 10 feet, Na, just inside him.  Cantlay made his, applied the heat but Na hit it perfect and did his “Walk It Into The Hole” routine.

It all ended on the second playoff hole when Cantlay left himself 43-feet short from 141 out and Na, 24-feet from 160.  Cantlay’s approach putt left him a nervous five-footer while Na had no gimme either, just inside four feet — playoff nerves for both.  Cantlay missed, Na made and Na perhaps became one of the first players to make two huge mistakes over the final nine holes and still claim victory.

Na was overcome by his emotions afterward.

“I’ve been in this situation before where I lost the lead and I failed many times. I’ve lost three playoffs. This is my first playoff win. I kept telling myself this is the playoff I’m going to win. It felt great to win,” he said with tears flowing.  He got a big hug from wife, Julianne, and daughter, Sophia, on the 18th green. And then he shared a huge hug with his father, Yong, who saw his son win on the PGA Tour for the first time.

Na spoke in Korean and thanked his fans in that country for their support.

In the end, Na showed his toughness.  “I kept telling myself this is the playoff I’m going to win.  It feels just amazing.  People here (Las Vegas) have been so great to me.”

This was one for the record books as well.  Na made north of 556-feet in putts for the week, the best performance since ShotLink was invented.

Yes, a week to remember for Kevin Na.