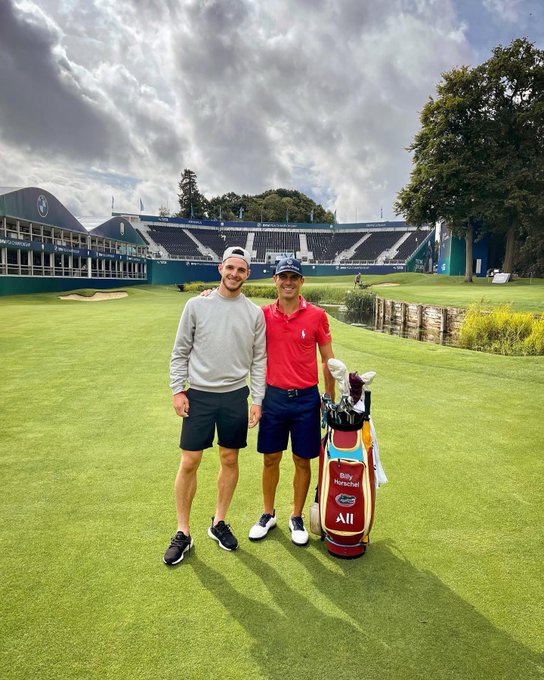 Billy Horschel got to hang out with buddy and West Ham midfielder Declan Rice.

There’s a strong contingent from the PGA Tour in the field this week at the BMW PGA Championship at Wentworth and for the first two days, defending champion Billy Horschel will play with Rory McIlroy and U.S. Open champ Matt Fitzpatrick.

Horschel flew across the pond early to soak in some of the U.K. atmosphere that he really enjoys.  Over the weekend, he watched his favorite Premier League (soccer) team, West Ham go up against Chelsea, with Chelsea’s lads prevailing.

Horschel spent some time at Wentworth with West Ham midfielder Declan Rice, who asked Horschel the obviously question:  “When are you going to buy a place over here?”

Horschel said it’s been on his mind as well as his wife’s.  But he’s inclined to get his children through college before making the purchase.

“My stats guy, Mark Horton, is English and he’s been with me for ten years, and Fooch (Mark Fulcher) is my caddie. He’s been with me for a couple of years,” said Horschel.  “Horts has been saying it for many years. He says I’m half-English because I love it over here. I do love the culture. I’m not a history buff but I love history and I’ve always loved English history and learning about it. And so I just think all those things factored in just makes this place so special to me.

Horschel also has a fondness for the Wentworth Club, site of this week’s championship.

“It’s a great feeling. I sound like a broken record but I watched this event for many years on television growing up. It was always the first week we got out of school. I watched early in the morning before I went to the golf course and to finally come here in 2019 and experience the event, I fell in love with the golf course, which I think I knew was going to happen.

“Seeing the way the course was on TV and watching the Match Play event here as well. And then the crowd support, it was over the moon. I couldn’t have asked for anything better  To finally come back last year and get the victory — a lot of guys talk about dreaming about winning events, and I’m not one that dreams about winning events. I’m not one that has ever been one of those kids on the putting green, like, ‘this putt is to win this event’. That’s just not me.”

Last year, Billy went out and took what he wanted.

Joining him, Rory and Fitpatrick from the PGA Tour will be Jon Rahm, Steve Lowry, Justin Rose, Kurt Kitayama, Viktor Hovland, Tyrrell Hatton, Adam Scott and Tommy Fleetwood, among others.