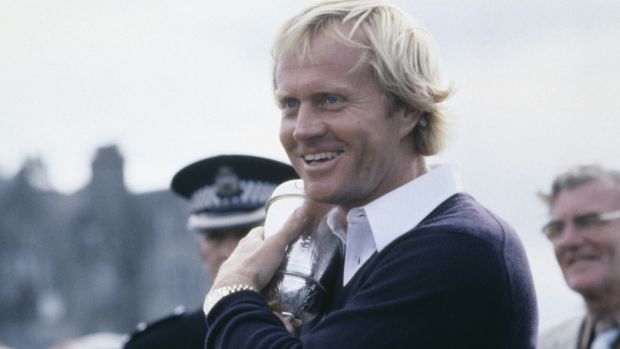 Jack Nicklaus Edges Tiger Woods In “Open For The Ages”

Jack Nicklaus vs. Tiger Woods down the stretch — that was the scenario in the fictional “Open For The Ages” on Sunday at St. Andrews.

The Royal & Ancient set up the perfect duel on The Old Course between the two greatest players ever in the game of golf.

Woods led Nicklaus by a shot after a birdie at the par five 14th as he got to 16-under, making birdie to Jack’s par.

After two pars at the 15, Nicklaus tied Woods with a seven-foot birdie putt at 16.

It was the world-famous Road Hole that was the deciding factor in this ultimate battle between the two men who have 33 majors championships between them.

Tied at 16-under, both players hit good drives over the shed at the hotel right of the 17th tee.  But it was the second shots that made the difference.  Nicklaus hit first and took the safe route, leaving his approach just short of the green to the right but pin high — he’d be able to putt his third.  Woods, unfortunately, hit his approach a touch heavy and left himself with the nasty Road Hole Bunker in between him and the hole.

Nicklaus, a good 80 feet away, hit a perfect shot with his putter that stopped within six inches of the hole and put major heat on Tiger.  With an extremely tight lie, Woods chose to try and putt around the famed bunker but left himself 30 feet for par.  He would make bogey and fall back to 15-under, Nicklaus stayed at 16.

There was no drama at the 18th.  Nicklaus, from short of the green, went low with his second and wound up 50 feet past the hole near the back of the green while Woods went high over the Valley of Sin to the left of the green and couldn’t get his short wedge shot close, finishing 30 feet from the hole.  Jack’s first putt settled inside three feet, Woods missed his birdie and Nicklaus made his par for the victory.  The two started the day tied 12-under, Jack closed with 68 to Tiger’s 69.

There were huge names right behind them.

Seve Ballesteros (69) birdied the 18th to finish solo third at 14-under, Tom Watson (70) and Sir Nick Faldo (70) tied for third at 13-under.  Rory McIlroy closed with a sensational 63 (he missed a short birdie putt at The Road Hole) and he tied for sixth at 12-under with Louie Oosthuizen (70).

Overall it was interesting.  There was very little footage for Nicklaus over the outward nine at The Old Course as the broadcasts didn’t include the outward nine back in the day.  There was way too much air time for John Daly and Jordan Spieth, who have just one title between them.  Ernie Els had too much air time and others who made the final day’s footage included Greg Norman, Lee Trevino, Jose Maria-Olazabal and of course, The King, Arnold Palmer, who was shown in footage from his final appearance in the Open Championship.

Statler closed with a 68 to finish 14-under par, two shots better than England’s Richard Mansell.

The Korn Ferry Tour fiinished a two-week run in San Antonio and it was Davis Riley getting his second victory of the season on Saturday.

Riley finished with a five-under par 67 at TPC San Antonio for a 16-under 272 total and two-shot victory. Riley also won the Panama Championship last February.  Riley, 23,  turned pro last year after playing his college golf at Alabama.  He now moves to the top of the Korn Ferry points list. With one more win this season, Riley would become the 12th player in tour history to earn an automatic promotion to the PGA Tour. It was the fourth top-10 result in 11 starts for Riley. France’s Paul Barjon (69) and Canada’s Taylor Pendrith (67) tied for second at 14-under 274. Will Zalatoris, who won two weeks ago at TPC Colorado and is Riley’s roommate, tied for fifth.