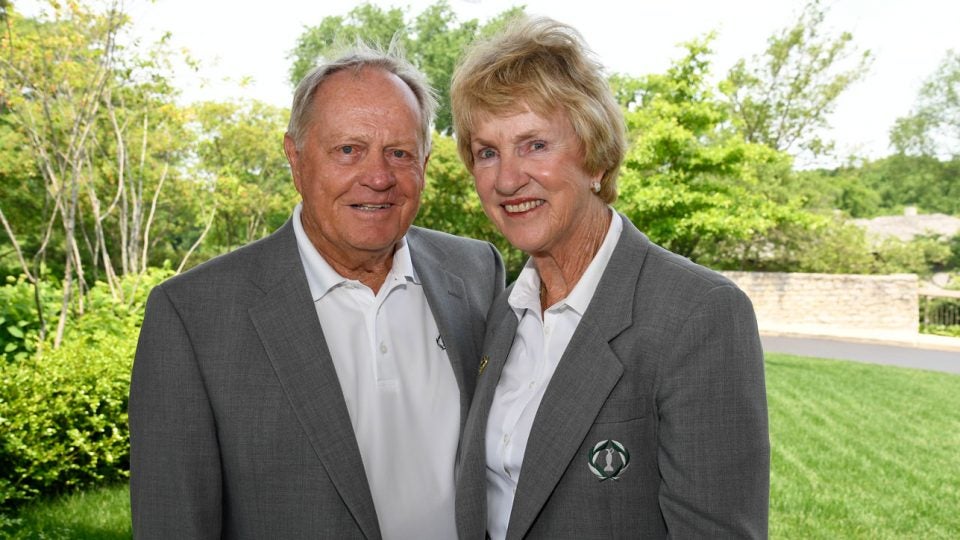 Jack and Barbara Nicklaus were quarantined at home for a month last March.

The big eye-opening moment from The Memorial didn’t come during play on Sunday, it came during the weather delay when Jack Nicklaus casually told Jim Nantz of CBS that he and wife Barbara tested positive for COVID-19 last March.

“We were just a couple of the lucky ones,” Nicklaus declared to Nantz.  Jack said he and Barbara were in self-isolation at their home in Lost Tree Village from March 13 to April 20.

After the quarantine, they have both tested positive for the virus antibody.

Tiger Woods once again found himself grinding in difficult conditions with high winds and a fast, firm golf course on Sunday at the Memorial.  He shot 40 going out but rallied with an even par 36 coming home.  His 76 left him at six-over for the tournament and tied for 40th.

When will Woods play again after admitting he “needs more reps”?

“I got four rounds in, we made some progress this week,” Woods said.  “Gotta clean things up around the greens.  But I got my feet wet.”

Woods was asked when he might play again and he gave a one-word response — “Soon.”

He won’t play next week in the 3M but could show up at the WGC-St. Jude in two weeks in Memphis.   The PGA Championship is the week after Memphis at Harding Park in San Francisco.

Brooks Koepka Closes With An 80:

Brooks Koepka’s wounded knee continues to bother him and it showed on Sunday.  He closed with an 80 and his 12-over par finish left him tied for 62nd.

Koepka wasn’t the only member of the “80 Club.”  Mark Hubbard and Sung Kang shot 80s.  Joel Dahmen shot 81 as did Adam Hadwin.  Former Memorial champion Will McGirt shot 83 while Tyler Duncan had the day’s high round — 84.

Round of the day belonged to England’s Matt Fitzpatrick.  He was the only player in the field to break 70 and his four-under round moved him from 18th at the day’s start to solo third.  As a side note, he had Jim “Bones” Mackay on the bag for the second straight week but it was temporary duty for Mackay.  Fitzpatrick’s regular caddie is back on the bag next week.

Jason Day is a member at Muirfield Village, plays there regularly and lives with his wife and children in Dublin.  He’s not had much success in Jack’s tournament until this week.

Day shot 73 Sunday to finish at four-under par.  He tied for fourth with England’s Matt Wallace.  Day has never posted a top 10 finish on his home course before Sunday.  His best finish was one top 15, he had missed the cut four other times.

When Jon Rahm entered the scorer’s room, PGA Tour head official Slugger White informed him as to what transpired on the 16th hole when Rahm grounded his club behind his ball, causing the ball to move slightly.  Rahm was penalized two shots for not replacing the ball to its original position after it moved.

“He accepted it like a gentleman, the man he is and went on with it,” White said.  “He said ‘if it moved, I accept the penalty.'”

Rahm said the clutch shot “will probably go down as my greatest chip shot.  I don’t know if I’ll ever that top.  It’s unfortunate to have an asterisk on an unbelievable shot.”

Rory McIlroy hasn’t done much since the PGA Tours re-start and his poor play continued Sunday at the Memorial.  McIlroy, now the world’s former No. 1, closed with a 78 and tied for 32nd.

Rory shot 40 on the front and wasn’t much better coming home in two-over par for the final nine holes.