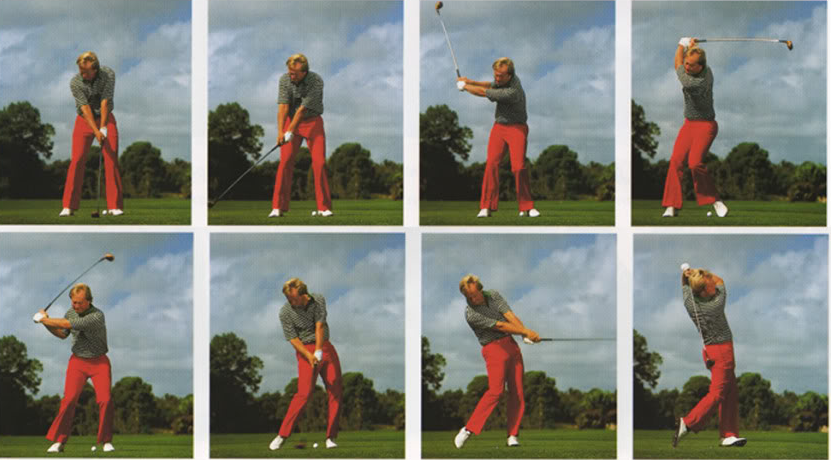 Jack Nicklaus started his swing by turning his head toward his right shoulder.

Jack’s Head Position Is Something To Emulate

Posted By: Tom Edringtonon: January 02, 2020In: The Lesson TeeNo Comments

Today we look at the importance of keeping your head steady and behind the ball throughout the golf swing.

The cool thing about the folks at the Golf Channel NOT WORKING over the holidays is that they will run some of those wonderful old replays from the Shell’s Wonderful World Of Golf series.

Was watching one with Jimmy Demaret commentating on the competition between Peter Alliss, Dan Sikes and Al Geiberger and Demaret noted:  “The head is the anchor for the golf swing.”

Demaret went on to note how important it is to have you head well behind the ball throughout the swing and it is imperative that it stays there until the ball has left  the club face.

We’re going old-school for you today with a sequence of Jack Nicklaus’ swing from his prime playing days.

Jack’s signature move that started his swing was him moving his head toward his back shoulder.  Basically what he did was let his head make a small turn from left to right.  To emulate that, just move your nose toward your right shoulder.

Notice in the sequence pics above how Jack’s head remains well behind the ball throughout the swing.

I see too many high-handicap and middle-handicap players move their head forward during the swing — one of golf’s pure death moves.  Nothing good will happen if you do that.

Demaret said in his commentary that if your head remains steady behind the ball, it’s more difficult to hit a bad shot and getting rid of bad shots is something we’d all like to do in 2020.

Note:  Dan Sikes won that match in Hawaii.  Peter Alliss should have won but missed four putts from inside three feet.