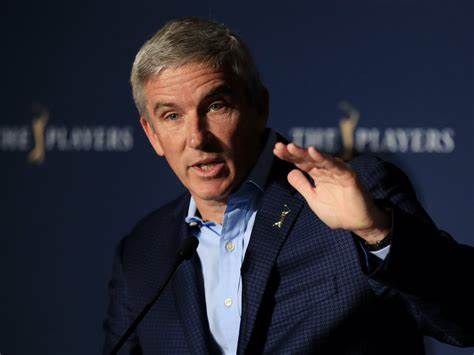 PGA Tour Commissioner Jay Monahan made his first comments after this weeks suspensions.

Jim Nantz made the smooth intro, Sunday afternoon as PGA Tour Commissioner Jay Monahan sat in on the CBS telecast of the Canadian Open, to talk about the week’s happenings — big happenings.

Those “decisions” Monahan referred to was Phil Mickelson leading a band of former PGA Tour players into the LIV Series Den of Iniquity outside London.

Monahan was all smiles — the Canadian Open drew overflow crowds, thousands lined each fairway on Sunday.  It dwarfed the turnout in London.

Then there were some of the PGA Tour’s brightest stars — battling it out down the stretch — Rory McIlroy, Justin Thomas, Tony Finau, Sam Burns.

“You’ve got true, pure competition, the best players in the world here at the RBC Canadian Open, with millions of fans watching. And in this game, it’s true and pure competition that creates the profiles and presences of the world’s greatest players. And that’s why they need us. That’s what we do,” Monahan said.

Over in London the LIV had a day of mediocrity on Saturday where Charl Schwartzel, a player with no wins anywhere in the past six years, beat someone name Hennie Du Plessis, Wally Uihlein’s kid and someone else you’ve never heard of.

The final group at the Canadian had rounds of 62, 64, 64 and earlier in the day, Justin Rose just missed taking a bite out of the “59” apple.  Over in London, only eight of the 48 managed to shoot under par.

Monahan pointed out that the LIV is nothing more than “a series of exhibition matches, the same 48 players.”

LIV players were grilled over the money source last week.  Monahan also said players paid an exorbitant amount of money would “have to be living under a rock” to not know they would be criticized for the source of the money.

Then Monahan added:  “I would ask any player that has left, or any player that would ever consider leaving, ‘Have you ever had to apologize for being a member of the PGA Tour?’”

As he got further into the Saudi money grab, Monahan added:

“It’s not an issue for me, because I don’t work for the Saudi Arabian government,” Monahan said, a veiled dig at the notion of being a free agent. “But it probably is an issue for players who chose to go and take that money. I think you have to ask yourself a question: Why?

“Why is this group spending so much money — billions of dollars — recruiting players and chasing a concept with no possibility of a return?” he said. “At the same time, there’s been a lot of questions, a lot of comments, about the growth of the game. And I ask, ‘How is this good for the game?’”

American Defectors To LIV Series Get Letter From 9/11 Families:

Seems former PGA Tour players leaving for the Saudi-backed LIV Series attracted attention from outside the world of golf.

Each of the players who left the PGA Tour received a letter from the organization for the families who lost members in the 9/11 attack on the twin towers in New York City.

The letter read in part:

“As you may know, Osama bin Laden and 15 of the 19 September 11 hijackers were Saudis. It was the Saudis who cultivated and spread the evil, hate-filled Islamist ideology that inspired the violent jihadists to carry out the deadly 9/11 attacks. And, most egregiously, it is the Kingdom that has spent 20 years in denial: lying about their activities, and cowardly dodging the responsibility they bear. Yet these are your partners, and much to our disappointment, you appear pleased to be in business with them.

“Given Saudi Arabia’s role in the death of our loved ones and those injured on 9/11—your fellow Americans—we are angered that you are so willing to help the Saudis cover up this history in their request for ‘respectability.’ When you partner with the Saudis, you become complicit with their whitewash, and help give them the reputational cover they so desperately crave—and are willing to pay handsomely to manufacture. The Saudis do not care about the deep-rooted sportsmanship of golf or its origins as a gentleman’s game built upon core values of mutual respect and personal integrity. They care about using professional golf to whitewash their reputation, and they are paying you to help them do it.”

Thongchai Jaidee shot a final round 68 Sunday and won the American Family Insurance Championship at the University Ridge Golf Club in Madison, Wisconsin.

Jaidee got into the tournament thanks to a 10th place finish in Iowa and Jaidee became the first player from Thailand to win on the Champions Tour.  He finished a shot in front of Tom Pernice Jr., who shot 66 over the final 18 holes.

“Very big thing for me,” Thongchai said. “The game has changed. Now I’m very, very happy to be on tour.  “Great tournament here,” Thongchai said. “I played solid, solid, solid. I took one mistake on 16, hit the tree and lost the ball. We make good bogey and try to get my plan. Holed a good putt on 17 and the game changed. I think my confidence in the putting, that’s why helped me a lot for this week.”

Tournament host Steve Stricker finished in a tie for ninth.  Schwab Cup points leader Steve Alker gave everyone else a chance by taking the week off.

Bryson DeChambeau and Patrick Reed will be joining the LIV Series when it move to Portland next month but there could be others joining them.

Speculation is swirling that Rickie Fowler, Matt Wolff and Jason Kokrak could be joining them and possibly Bubba Watson when he’s recovered from his knee surgery.

Fowler and Wolff have been struggling with their games in a big way and that seems to be one of the profiles for players jumping to the rival league.  Kokrak has been in bed with the Saudis for a long time as a brand ambassador for “Saudi Golf.”  As for Watson, his days as a factor in championships are waning — another profile trait for players making the exit.