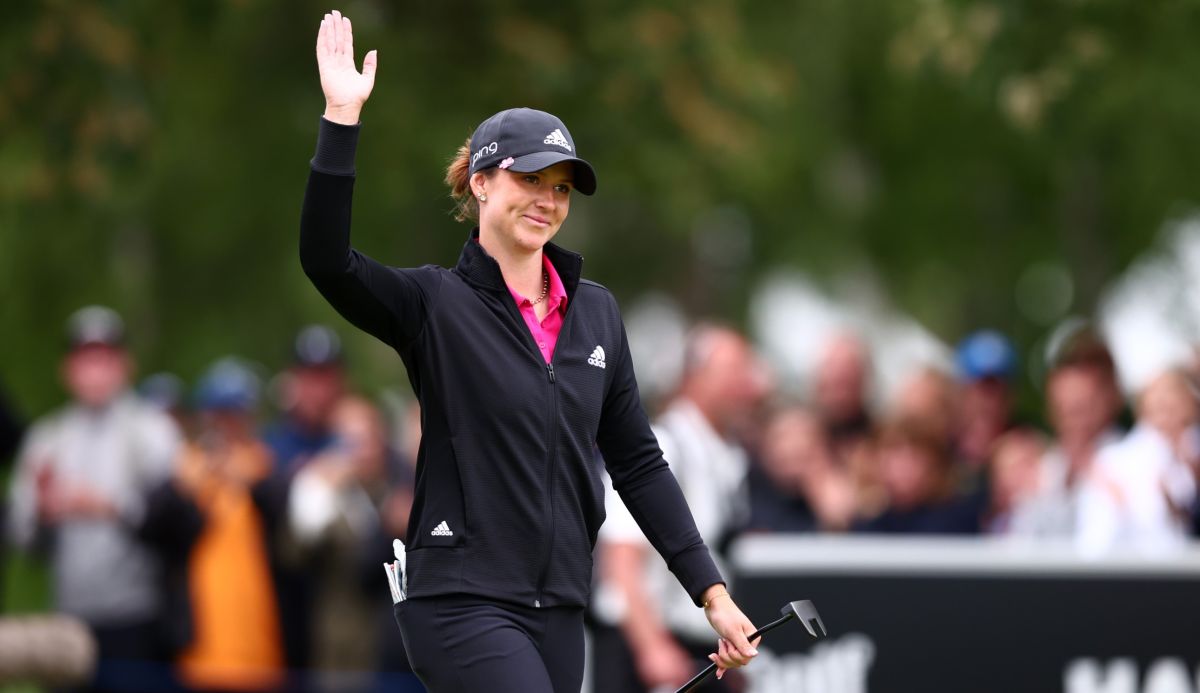 Linn Grant shot the day's best round -- an eight-under par 64.

Sweden’s Linn Grant got an historic victory Sunday at the Scandinavian Mixed and became the first woman in history to win a DP World (European Tour) championship.

And Grant didn’t just win it — she blew the rest of the field away, including co-host Henrik Stenson.

All Grant did was shoot a final round 64 for a 24-under par effort, a full nine shots better than Stenson, co-runnerup with Scotland’s Marc Warren.

The 22-year-old got off to a fast start with five front nine birdies.  She then birdied 10 and 11 to start her victory march.  By the time she added her eighth birdie of the day at the 14th, just about all she had left to do was remain upright.

“It’s huge. Just playing at home and having the crowds here, my family by my side, boyfriend on the bag – it’s crazy and I’m proud of myself,” Grant said after she breezed her way to the finish.  “I just hope that people recognize women’s golf, more sponsors go to the LET and hopefully this pumps up the women’s game a little bit more.

I hope this victory is big. I hope it brings women more forward and it gets people’s eyes on us a little bit more. It is always nice to say that you beat the guys for a week! To be able to speak Swedish and hear everyone out there cheering for you, it was amazing.”

This event was co-sanctioned by the DP World Tour and the Ladies European Tour.  LET players played in the same groups with the men and the tackled the same course setup with the exception of the tees moved up a bit for the women.

Grant was the only female player to finish among the top 10.  She has now won three times in her last six LET events.

Brooke Henderson had been in a slump of sorts but that came to an end Sunday as she fired a final round 64 then took the Shoprite Classic title in a playoff with Lindsey Weaver-Wright.

Henderson shot a bogey-free 64 — seven-under par at the Seaview Resort Golf Club and finished well ahead of the final groups.  She started the final 18 four shots back but posted 12-under and waited.

Weaver-Wright came to the last hole needing birdie to tie Henderson and holed a 12-footer for a 65 to force the playoff.

It didn’t take Henderson long to get her first win in nearly a year.  She hit a great drive then an even better second that stopped just 10 feet from the hole on the closing par five.  Weaver-Wright was well short with her second and left herself 11 feet for birdie.  She missed and Henderson promptly rolled in her eagle putt for the win.

“I just tried to make as many birdies as a could,” said Henderson, who made a switch in her putting grip to left-hand-low.  “It’s been working really well,” said the 24-year-old Canadian who now has 11 career LPGA Tour wins.

The top women amateurs from the U.S. had an easy time last week as they routed the team from Great Britain and Ireland — 15 1/2 to 4 1/2 at historic Merion Golf Club.

Charl Schwartzel hadn’t won anywhere in the world in six years but found his sweet spot among the renegades of the LIV Series.

Schwartzel didn’t play that well in the Saturday finale at the Centurion Club outside London but he didn’t have to.  He shot a two-over par 72 and finished seven-under par for the 54-holes, a shot better than South African Hennie Du Plessis.  Branden Grace and Peter Uihlein tied for third at five-under.

Only eight of the 48 players managed to shoot under par.

None of the big names on the Series did much.  Dustin Johnson did manage to shoot under par (69-79-70) — one-under.  Ian Poulter was four-over, Lee Westwood eight-over and Phil Mickelson finished 10-over as 39 of the 48 shot over par.