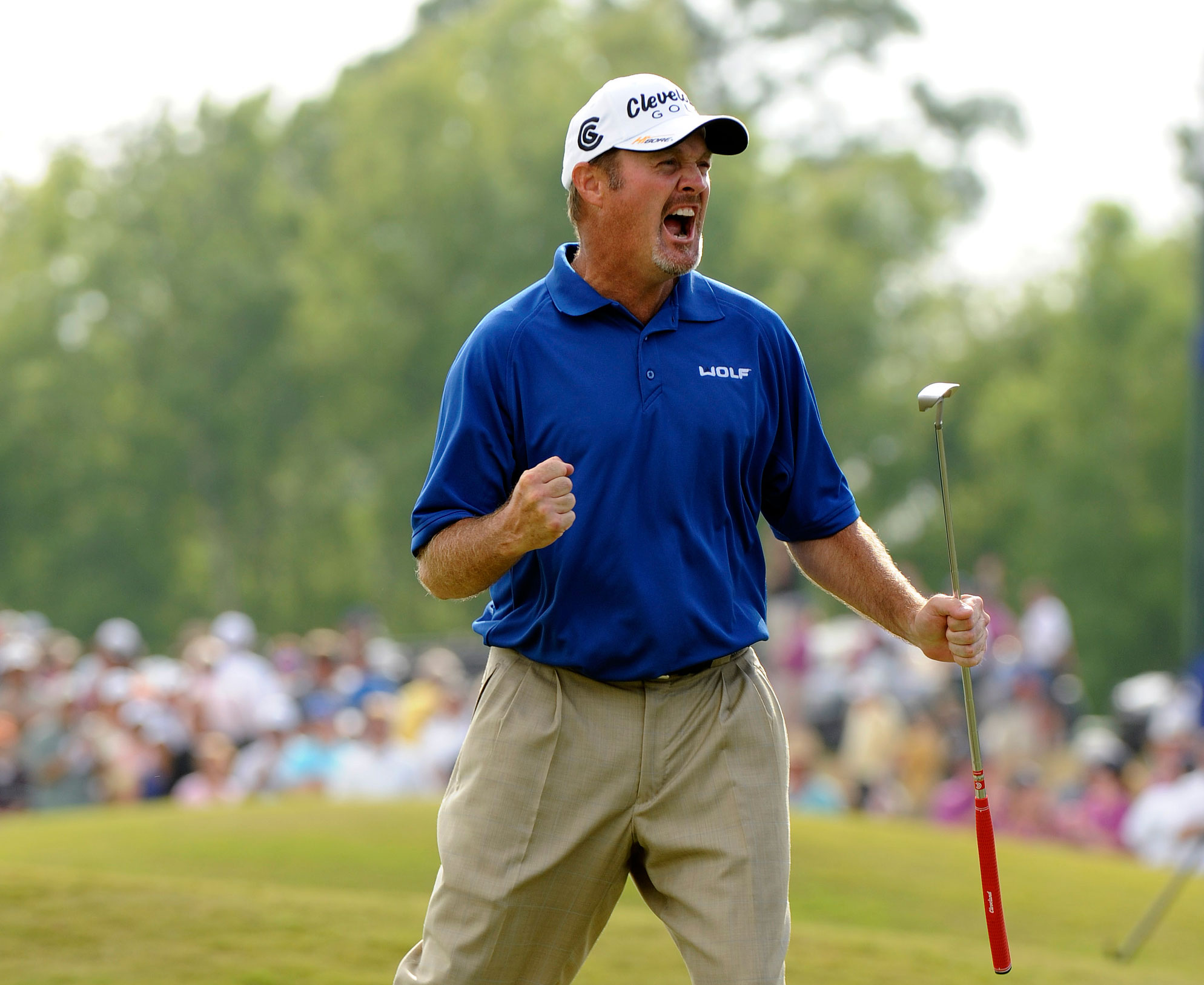 Jerry Kelly got some putting help from his friend Steve Stricker.

Believe it or not, someone not named Steve Alker won this week at the Principal Charity Classic.

It was Jerry Kelly and Kirk Triplett tied at 18-under par through 54-holes at the Wakonda Club and it only took Kelly one playoff hole to take the championship from Triplett.  Both closed with 67s on Sunday in Des Moines.

Alker, who has dominated action on the senior circuit this season, shot a final round 69 and tied for third with Bernhard Langer, who closed with 68.  Both finished at 16-under par, two shots out of the playoff.

Kelly returned from a lightning delay to play the final three holes of regulation, making a birdie on the par-3 17th. Triplett birdied the par-4 16th and closed with two pars.

“Just a good old-fashioned afternoon Midwest thunder boomer pop-up,” Kelly said about the storm. “It didn’t last long, luckily. Didn’t even think we were going to need to hit balls, but I’m glad I did because I found out just how old I am on that first drive in the playoff.”

Kelly’s second shot stopped just four feet from the cup to set up his winning putt.  He broke out of a putting slump thanks to a lesson from fellow Wisconsonite Steve Stricker.

“It felt good all week. I just had to keep my patience in there. That was what sent me through, besides obviously Steve’s putting lesson again. But really is the patience. Because of that, because I was able to make some putts, that really carried me through.”

Kalle Samooja had to wait two hours for it to happen but after shooting a course-record 64 on Sunday, he picked up his first DP World Tour win at the Porsche Open.

He started the day seven shots back of the leaders (sound familiar?) and put together an eight-birdie, no bogey effort and capped it off with back-to-back birdies at 17 and 18.

He then had to wait for the final groups to finish.

It was the only round where Samooja broke par at the Green Eagle Golf Club outside Hamburg.  He shot 72-72-74 and was two-over heading into Sunday.  But he put together the best round of the week to earn his first win.  He finished at six-under, two better than Wil Besseling (71) and three clear of Perez (74) and Richard Mansell (70).

“It is truly special. It’s been a long journey. I’ve been close a few times,” Samooja said after the win.  “We had a number in mind today and we reached that. We thought it might be enough and it was a long two-hour wait at the clubhouse, seeing the guys battle it out.  In the end, fortunately it was enough.

“I don’t know what happened in the end. I was just hoping to get a solo second place and get a ticket to the U.S. Open but this is a little better,” said Samooja, who earned a berth in the U.S. Open at The Country Club next week.  “I’m really looking forward to the U.S. Open. One of my goals this year was to play more majors.”