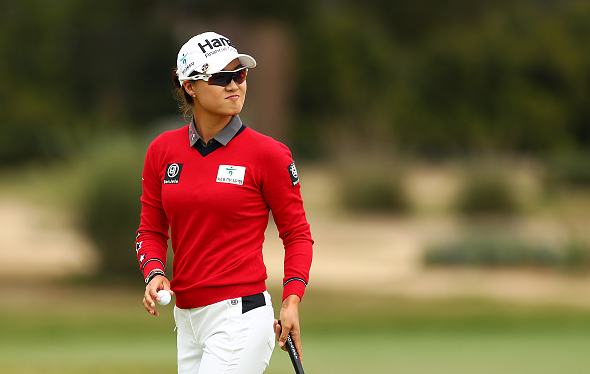 No one has stood at a score of 200 after 54-holes of the Women’s U.S. Open — at least until Saturday when Minjee Lee shot a near-flawless 67 that put her 13-under heading into Sunday’s final 18.

Lee’s 54-hole record has her three shots clear of her closest competition and that’s her third round playing partner — Mina Harigae.  A pair of bogeys early on the final nine dropped Harigae back to nine-under but a birdie at the 16th got her within striking distance of the leader.

Lee and Harigae are the only players in double-digits under par after three rounds.

If someone aside from Lee is going to make a run on Sunday, they’ll have to bring their “A” game.  If Lee brings hers, it might not matter.

After Harigae, Bronte Law is the only player in at seven-under par after her Saturday 68.

It’s very crowded at six-under par, a full seven shots back and the two big names lead that list — world No. 1 Jin Young Ko and No. 3 Lydia Ko.  Ko shot the day’s best round, 66, to make it to six-under.  Jin Young Ko shot 71.  Anna Nordqvist got to six-under as did Hyegin Choi and Xiyu Janet Lin.

World No. 2 Nelly Korda, making her return to competition after recovering from surgery, was nine back at four under par.