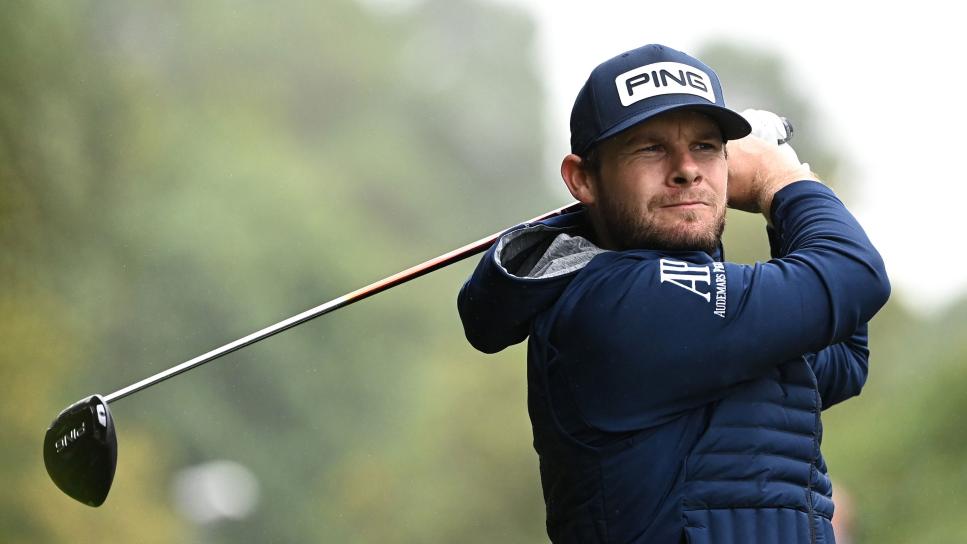 It takes roughly 20 hours to fly from London to Las Vegas.  It’s not something you want on your “to do” list but that’s what Tyrrell Hatton did after his “dream” win last week at Wentworth.

It was about 45 degrees at Wentworth, just outside London last Sunday when Hatton added the BMW PGA Championship to his trophy case — it’s a biggie over there on the European Tour.  It was 90 degrees in Las Vegas on Thursday only 45 degrees in climate change.  Add some major jet lag, a birthday celebration on Wednesday (Hatton turned 29) and you really wouldn’t expect all that much out of the world’s new No. 10 at the opening round of the C.J. Cup.

All Hatton did was birdie his first two holes of the day at really ritzy ultra-ultra private Shadow Creek (more on it later) then for good measure, he jarred a wedge from 92 yards out for an eagle two at the 12th.  That got him started on his way to a bleary-eyed, seven-under par 65 that earned him the lead at this event, moved from its home on Jeju Island, South Korea.

“It’s fair to say I’m pretty tired at the moment,” Hatton said afterward. “Today was a long day. Very happy with my score, and I just need to try and get back to the hotel this evening, have a good rest and hopefully sleep better than I did last night and, fingers crossed, for another good day tomorrow.

“It’s been a long day, struggling a little bit with jet lag, very happy with that score.  Golf’s weird, my swing felt horrific on Tuesday, Wednesday.   I concentrated a little more today; I really like the golf course it’s in amazing condition, the greens are perfect. I putted real nice today and I need to keep that up for the next three days. Happy to shoot what I did.”

You could tell Tyrrell was a little cheeky, as the Brits might put it.  He was irritated with a couple of shots and simply gave it the old club toss.  The Sheriff of Nottingham (aka Tour Commish Jay Monhan, should wave the fines as a birthday gift to Hatton.  “I was tired, so I was a bit on edge,” Hatton explained.  “It is what it is.”  (Thank-you Tiger Woods).

Hatton liked the course and he should — who wouldn’t?  Back in 1990, Steve Wynn gave architect Tom Fazio an unlimited budget and what came out of the stark sand of the desert after about $60 million was spent was the lush, tree-lined layout that instantly became urban legend.  It’s so secluded and the holes tree-lined such that you can’t see another hole when you play on one — ever seen that?

Legend has it that high rollers have played for $10,000 a hole on this course.  Early on it was only for Wynn and his friends and high rollers — whales as they call ’em in Vegas.  Sports Illustrated once wanted to do a feature on the course — the response?  Thanks but no thanks.  No publicity wanted (or needed).

Tiger Woods told a story back in 2018 that years before, the first time he played the course, he met Elizabeth Taylor on the 17th tee.

Full-grown trees and vegetation were brought in from the start so the place looked like it was there for 20 years when it opened.

Good thing there are no spectators allowed this week — there’s no place for them to walk, no place for stands.  That was never in the Shadow Creek equation.

Today the property is owned by MGM resorts and the doors were first opened for the infamous Woods-Mickelson $9 million winner-take-all match two years ago.

This week, the field is putting on perfect greens, fairways without divots — perfect conditions — and it should be that way, the place gets about zero play compared to your average nice club.

Which brings us back to Hatton, who drew a lot of attention last week for the hoodie that was part of his keep-warm final round wardrobe at Wentworth.  The hipster-design from Adidas already has some starched-shirt, stuffy private clubs banning the apparel — to which Hatton asked, “What’s the big deal?”

Well the big deal Thursday was the just-turned 28-year-old world’s No. 10 showing up everyone to get this one started.

He did it after a 20-hour commute while Las Vegas resident Kevin Na had a 20 minute commute.

For the record, Tyrrell clipped Kevin by 11 shots.

So yes, forgive Hatton if he was a bit chippy on Thursday.  And no worries about the “Hoodie” showing up for the final round, the weather will still be quite warm although we have heard rumors that Bill Belichick has already ordered one.