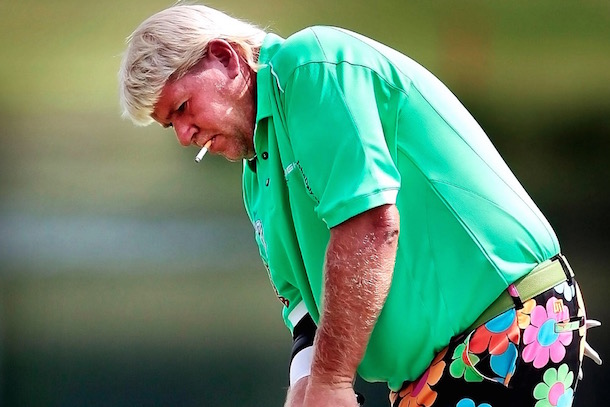 Cigarette-smoking John Daly gets a cart for the PGA Championship.

John Daly: Too Fat, Too Old, Too Unhealthy To Walk At PGA

The PGA Tour is a walking tour.

The world’s four major championships are walking events for the competitors.

Bethpage Black is a “walkers only” golf course for those who want to play during the New York golf season.

So why is it that obese, cigarette-smoking John Daly will be in the field of the 101st PGA Championship this week with a golf cart to haul his fat carcass around the championship layout?

“My knee is screwed. I had the meniscus cut out. I have osteoarthritis so bad — I can walk up a hill, I just can’t walk down one,” says the man who has likely lost more money gambling and probably consumed more alcohol than any player on today’s PGA Tour.

Daly also said recently that he has also been suffering from dizzy spells and that those spells forced him to withdraw from last week’s Regions Tradition, the first senior major of the year.

Why is Daly even in this week’s field?  The PGA of America, in all its wisdom or lack thereof, gives winners of the championship a lifetime exemption into the event.  Daly won back in 1991 at Crooked Stick.

Seems Daly, in his ongoing struggle to maintain some relevance in the golf world, filed a request under the Americans with Disabilities Act and will become the first player to ride a cart in a major since Casey Martin in the 2012 U.S. Open.

Surely the PGA of America finds this totally embarrassing and needs to re-think that “lifetime exemption” for winners thing.  Most guys like Price, Azinger, Elkington and Brooks know they can’t compete on a track like Bethpage Black, yet there will be Daly, bad knee, huge gut and ever-present cigarette, tooling around the course in a cart.

Then Daly came up with this gem:

“I hope I don’t get a lot of grief from the fans,” Daly said, contemplating those merciless New York sports fans who can get a bit rowdy when they’ve had north of a half-dozen beers.

So Daly will be out there, but who knows for how long.

Will he make the 36-hole cut?  Improbable.

Could he withdraw before 36?  Plausible.

Is his presence in the field laughable?