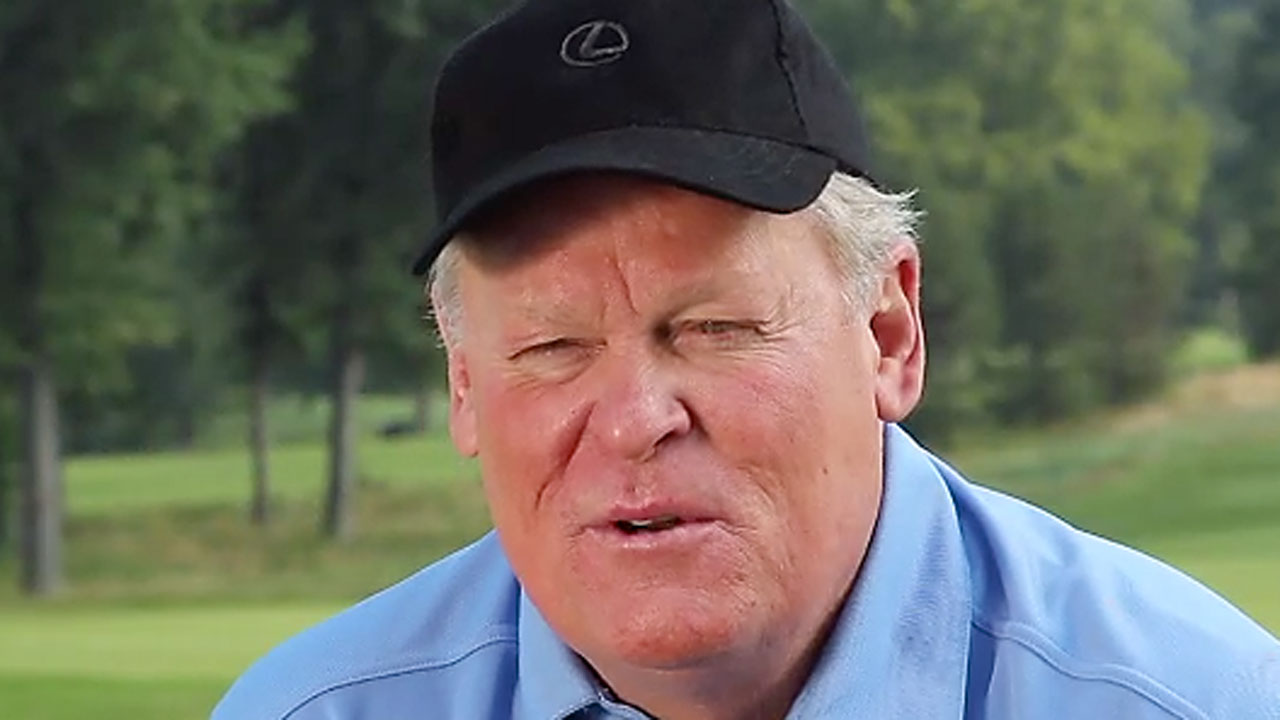 Johnny Miller's head is so big he can hardly wear a cap!

Johnny Miller Continues His Reign As The Despicable Talking Head

Quick warning to this week’s field at the WGC-Mexico:  Guys, don’t drink the water.

Quick encouragement for NBC analyst Johnny Miller:  Johnny, please go ahead and drink all the water you want.

It was pretty bad last week, but then again, pretty much par for the course when it comes to Johnny Miller — there was Miller with that big fat head of his, banging on golf’s sweetheart — Rickie Fowler.

Guess it wasn’t good enough that Rickie managed to shoot 71, just one-over par on a difficult golf course with winds blowing up to 20 miles per hour.

No, wasn’t good enough for Johnny Miller, the golf know-it-all who acts like he’s won double-digit major championships when it fact he won just two.

Miller gave us this gem as Fowler was finishing up his fourth PGA Tour victory:

“Obviously a win’s a win but you’ve got to learn to finish out Sundays like a true champion. He (Fowler) hasn’t learned to do that yet.”

Well excuse us Johnny if we give you the Bronx cheer on that one.

Fact is Miller is pretty much a Donnie Downer.  Seems like no one’s ever good enough, he hammered Fowler for hitting a ball in the water at the 17th hole but didn’t say much when Rickie stuck a wedge shot close and saved bogey.  Turns out he didn’t lose his lead, in fact it stretched to five shots by the time he walked to the final tee box.

The more we listen to Johnny Miller, the more we wonder how good Miller was or wasn’t when he was playing.

Turns out that fat-head Johnny has parlayed three good years into the feeling that he’s one of the best players who ever lived.

Speaking of Pebble Beach, he won seven times in California and six times in the desert.  Not a great performer outside those geographical areas.

It was bad enough putting up with Miller during last week’s Honda but we’ll have to listen to his oral dribbling again this week in Mexico.

Maybe Johnny can oogle at how far Dustin Johnson, Rory McIlroy and the rest will drive the golf ball.

If someway Rickie finds his way into the hunt on Sunday, don’t expect Johnny to cut him any slack or anyone else for that matter.

When it comes to Miller, seems like the older he gets, the better he used to be.

You get the idea that this guy won the career Grand Slam or something.

But he sits up there and throws out a lot of junk to see what sticks.

For now, we’ll go with Rickie, who admitted it wasn’t the prettiest win, but a win is a win.

Regardless of what Johnny Miller says.