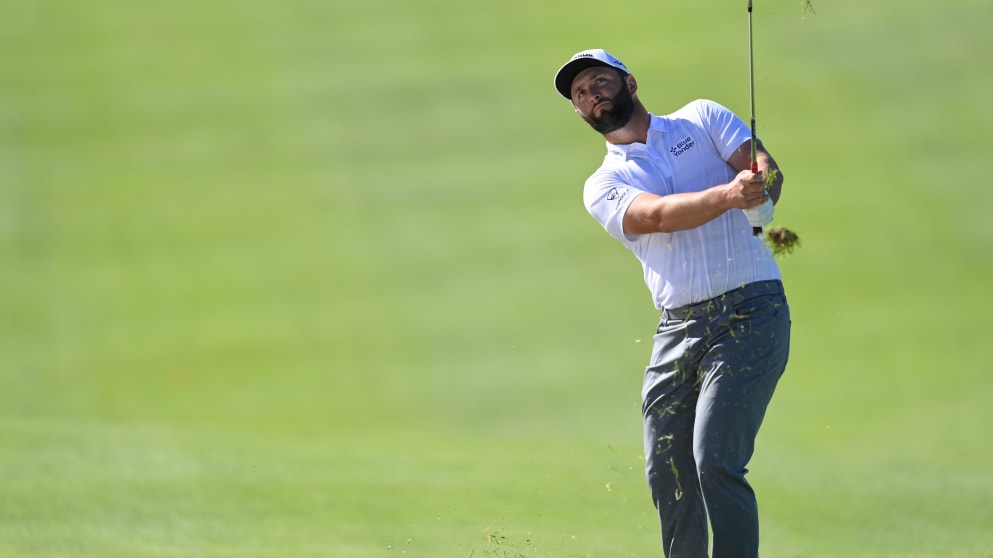 Jon Rahm had a large, enthusiastic crowd cheering for him on Thursday.

Ross McGown ranks 377th in the world, Sebastian Garcia Rdoriguez is No. 390 then there’s the home-country favorite — Jon Rahm, the world’s No. 1 who just happened to open with an eight-under par 63 on Thursday at the Open de Espana at Club de Campo outside Madrid.

Sure, McGown had his low round of the season — a fancy 10-under par effort (61) that saw him put together eight birdies and an eagle in the early wave.  And yes, Garcia Rodriguez had his career low — a nine-under par 62.  He’s also missed the cut in his last nine events but should make it to the weekend this time.

Then there’s the world’s top guy — Rahm.  He shot 63 with a bogey.  He offset it with seven birdies and an eagle and had the fans cheering loudly all day.

“There are quite a few fans out here and they are rather enthusiastic, they have been cooped up for too long and they have the chance to come out and watch me play,” Rahm pointed out after his round.  “I haven’t played on Spanish soil since this event two years ago, so they are golf hungry and they were great.  From the beginning, every single shot and every single putt I made they were really supportive and every time I missed a shot they were extremely supportive as well, so that always helps.”

Rahm, who started on the back nine, made a fast start as he got to six under after eight holes and while he dropped a shot on the 18th.  On his second nine, he added birdies on the fourth, seventh and eighth to sit two shots behind McGowan.

“It was a really good start,” Rahm said when he finished.  “Played eight flawless holes and then a bit of a stumble from 18 through three, I didn’t hit my best shots and was able to save a couple of pars to minimize the damage.  After that I was able to play some good golf coming down the stretch, giving myself some chances, but obviously we saw what Ross McGowan shot this morning – 10-under is a heck of a round out here.  I played good enough to maybe do it but you have to play flawless and make the putts.

“Overall, very happy with my round,” Rahm added.  “Last time I played here was the first time on the golf course but it didn’t take long to learn.  You have to hit it really well off the tee, if I drive like I did early on and at the end when I was hitting it long and straight, wedges into every hole, then it is a doable score.”

Last week Celine Boutier kept Jin Young Ko out of the winner’s circle at the Shop-Rite Classic.  This week, that may be very difficult.

Ko, runner-up to Boutier last week, was red-hot Thursday and opened with an eight-under par 63 at the Founders Cup.  She birdied half the holes at Mountain Ridge Golf Club and a single bogey kept her from shooting 62.  Still, she was three shots better than her closest competition.  Sandra Gal shot 65, her best effort in two years.  She’s been battling her way back after being diagnosed with Lyme disease two years ago.

Gal put together a bogey-free five-under round.  “I came into the tournament striking it really nicely and it’s kind of been building up the last few weeks,” Gal said after her round.  “But until you see the results on the course you just got to play, play, play.”

She hasn’t been able to play consistently over the last two years.  Lyme disease, which causes flu-like systems, including overwhelming fatigue, Gal has made just a handful of starts.  Midway through the 2019 season, she took a medical exemption and time away from the tour to focus on her health.

It’s improving day by day,” Gal said of her physical status.  “There’s ups and downs all the time. Sometimes it is a struggle, but overall there are a lot of positives that I have experienced the last few weeks, so I felt like I was ready to go out and play and keep working on it.”

Ko, the second-ranked player in the world, had to wait with the rest of the early starters as a 90-minute fog delay stalled the starting times.  She was only two-under going out but made six back-nine birdies for a 30 over her final nine holes.

World No. 1 Nelly Korda was back in action after a three-week vacation.  Korda was four shots back, one of four players who shot a four-under par round of 67.