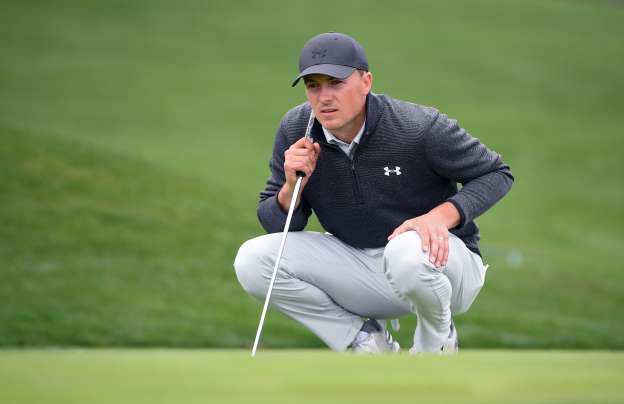 Jordan Spieth says he's still searching for his "A" game.

Jordan Spieth Close, But No Cigar Or A Win At Pebble Beach

Jordan Spieth knew he’d have to play well over the first seven holes at Pebble Beach on Sunday to snap his nearly four-year winless slump.

He had his chance on the first hole when he stood over an eight-footer for birdie at start his bid for victory at the AT&T Pro-No-Am.  Four years ago those seemed automatic.  But he missed right out of the box and that would be a harbinger of things to come.

Spieth did birdie the second, the par five, easiest hole on the course but promptly gave it back with a bogey at the third.  By the time he made the turn, all he could manage was an even par 36 and he was having trouble finding fairways — a formula for a not-so-great day at Pebble and another blown 54-hole lead.

“I got off to the exact kind of start I wanted to as far as where I was on the green on one and two and I hit two just great putts that could very easily have dropped and didn’t,” said Spieth, who held the 54-hole lead at the Phoenix Open.  “Then I hit a decent drive on three, kind of hit it in the corner of the bunker and shot up into where I didn’t have much of a stance, and I just, it was (tough to take). I got some really good breaks the first few days and it just felt like it kind of started to even out over the first five holes for me.

“It was tough from there. Once you knew you had lost the lead, then you’re playing a different game out here. Really it was just a really poor first six holes. And out here, that’s where you can score.”

Spieth admits his game is not where it needs to be for him to win and he was surprised as anyone to have two 54-hole leads.

“I would have said you’re crazy, to be honest,” Spieth said when asked if he could imagining himself leading both events. “I was not in a great head space.   I’m legitimately going around with maybe my B-game, and I know that stepping on the first tee.  And being in the lead by two, you can look at it both ways. It’s pretty awesome that I feel that I’m still significantly far off of where I want to be and am able to be leading the tournament through 54. But at the same time, it’s very difficult to go out knowing that you don’t have your best stuff and to go out there with my own expectation that I’m going to win today.

“So, that’s kind of the battle going into the day and I just hope that I continue to progress like this to where I can stand on that first tee as confident as I historically have been and where everything’s at to where I can go out and play boring golf and just hit a bunch of greens and make it a really easy 18 holes to win a golf tournament.

“I think a little bit — and today I learned a lot from, too — just how much of a roller coaster things can be,” Spieth continued.  “And this was something that I needed to learn to win. At the end of 2014, I went through this where you just have to look at each round as almost a marathon, these final rounds when you’re in contention Sometimes those first couple rounds you get in a nice groove pretty easily and you’re just trying to shoot up the board, but you need to set a goal in the final round understanding that Daniel could go five under on the first six holes out here and you can’t let that faze you because things can change so quickly especially on a golf course like this and the conditions that we have.

“So I think it’s just kind of being massively patient. I just wasn’t patient enough last week, tried to force a little bit early and ended up not taking advantage of some easy holes that towards the end would have been really nice to have those couple shots. So, yeah, I think quite a bit that I can take off of last week, but also from today and how quickly things change.”

Spieth will now travel south to Los Angeles for the Genesis this week at Riviera, his favorite course on the PGA Tour.

“I’m as confident as I’ve been in a long time,” Spieth said. “Not only the current outlook but also looking forward. So it’s still mechanics. It’s still dragging on. It’s still going too long and therefore getting late into the ball and I made some really, really good swings this week under pressure and I made some not so good swings under pressure and there were more good ones than there were last week.

So as I go into next week at arguably my favorite golf course in the world — Riviera, I look to have more swings that I know are getting into position, hitting the spots I know that I can kind of turn and burn from than I had this week,” Spieth said hopefully.

It’s going to be a stellar field this week at Riviera compared to the players Spieth faced at Pebble — seven of the world’s top 10 and 20 of the top 30.