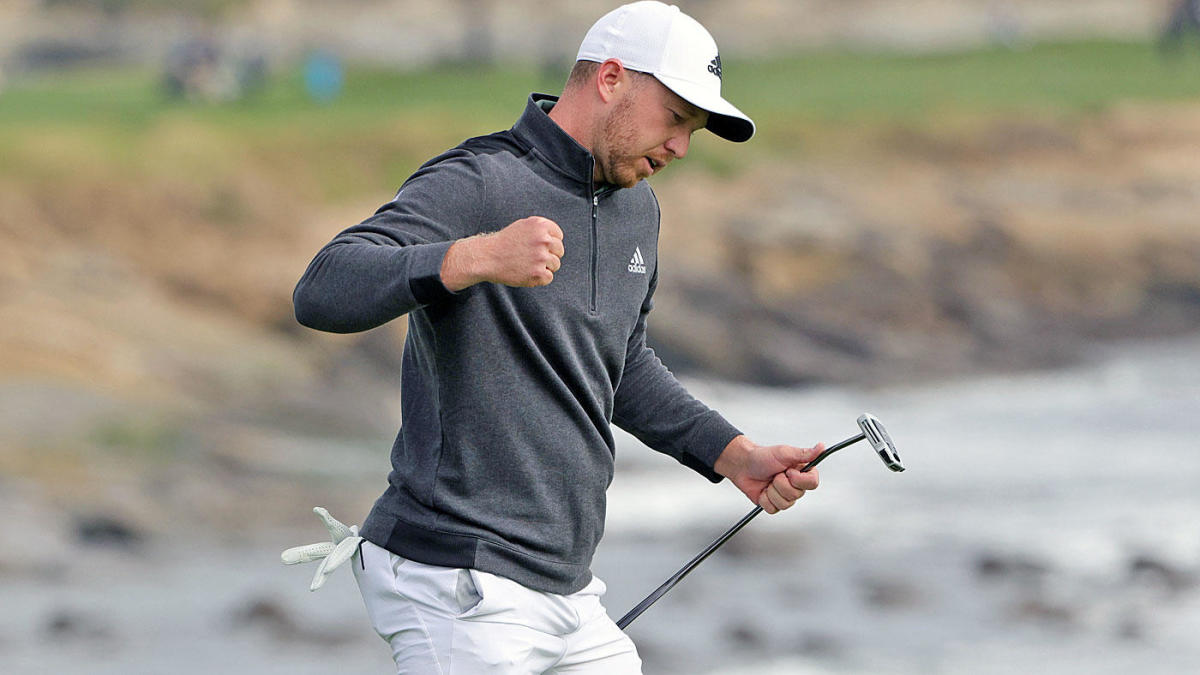 Dazzling Daniel — Berger Eagles His Way To Victory At AT&T

On Saturday, the iconic 18th hole at Pebble Beach slapped Daniel Berger upside the head.  On Sunday, it gave him a great, big, tournament-winning hug.

With the AT&T Pro-No-Am on the line, Berger hit three perfect shots that gave him a stunning eagle at the same hole where he made double-bogey 24 hours earlier.  After a perfect drive that squeezed into the fairway between the famous Cypress tree and the bunkers right of it, Berger hit a pure three-wood from 253-yards out that flew onto the green and stopped pin high, 31-feet from the hole.

“Best three-wood I’ve ever hit in my life,” is how Berger described that second shot.  It was clutch as he was sitting at 16-under par, tied with young Maverick McNealy, who was done for the day at 16-under after a closing 66.

Berger lined up his eagle putt then hit what he described as:  “The best putt I’ve ever hit in my life.”  Hard to argue that because he only needed two putts to win.  His ball tracked perfectly toward the cup then tumbled into the hole on its final rotation.  It was his second eagle of the day, his fourth in three trips around Pebble Beach.  It was good for a back nine 32 and a closing seven-under par 65 that gave him an 18-under par winning total.

He started the final round two back of overnight leader Jordan Spieth thanks to that out-of-bounds tee shot at the 18th on Saturday which led to a closing double-bogey seven.

But Berger flipped the narrative a day later.

Berger acknowledged his game is in better shape than it’s ever been.  “I’ve worked so hard the lasts six or seven months,” he said after collecting his fourth PGA Tour win, following up on last year’s victory at Colonial in the Charles Schwab Challenge.

There were at least a half-dozen players who had a shot at winning heading for the final nine holes.  Spieth had a tough time finding fairways and failed to take advantage of the early birdie opportunities over the first seven holes.  “A really poor first six holes,” was how Spieth described his start to the final round.  “And that’s where you have to score out here.  I was one-over through six and that was the difference.”  Spieth closed with 70 and tied for third with Patrick Cantlay at 15-under, a shot behind solo runner-up McNealy.

Nate Lashley looked like he had a good shot at picking up his second Tour win.  He was 16-under par standing in the 16th fairway.  He hit what he thought was a good approach but it went long.  His pitch settled 12 feet past the hole but he proceeded to four-putt from there for a ghastly triple-bogey seven that took him out of contention.  He did birdie the 18th for a 69 and a share of fifth place.

But the afternoon belonged to Berger.  He got the start that Spieth was hoping for.  He rolled in a 31-footer for eagle at the second hole then followed that with a birdie at the third to quickly get to 14-under.

“I knew if I hung in there that birdies would come,” Berger said.

Credit Berger for his positive attitude after the closing double on Saturday.  “I’m not letting one bad swing ruin my week,” he said after that seven.

The hole that tried to ruin his week, made it for him on Sunday.

“That’s incredible,” was how Spieth described Berger’s finish.  “You stand on the tee and know you made double yesterday, then make eagle to win.”

Incredible indeed — how about a little cheese on that “Berger”?