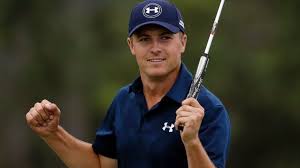 The Jordan Spieth that wowed everyone at the Masters and U.S. Open put his Superman cape on once again and blew ’em away at the Tour Championship on Sunday.

Spieth won at East Lake by four shots. His surgical 69 gave him the title and the FedEx Cup championship. He was nine-under par and four shots better than the three players who tied for second. For the record, it was Henrik Stenson, Danny Lee and Justin Rose who finished five under.

It was the perfect scenario for Spieth as East Lake took on a U.S. Open scene the final 36 holes with long rough and unforgiving conditions. It was Spieth who stepped up and dazzled Stenson with a putting display that was second to none.

Every time Stenson tried to close in on Spieth, the 22-year-old winner of two majors this season was holing a crucial long putt for birdie. That was the case at the eighth and ninth hole then again at the par three 11th where Stenson stuck his tee shot within three feet, only to watch Spieth hole his birdie from more than 45 feet away.

That took all the fight out of Stenson and from that point on, Spieth made seven straight pars to win easily.

Spieth has dominated Stenson in the past and did once again during the final round. He started with a one-shot lead but beat Stenson by three.

The victory was Spieth’s fifth of the season. It returned him to the No. 1 ranking in the world and he became the youngest winner ever of the Tour Championship and the FedEx Cup.

Spieth is a cinch for unanimous Player of the Year when it is voted on later this year.

“The goal of every players is to be standing here,” Spieth said as he hoisted the FedEx trophy. “We approached this like a major,” he said of his preparation for East Lake. “Boy that putter sure paid off!”

Spieth re-affirmed for the final 36 holes that he is the world’s best putter when it counts. He made only five bogeys over 72 difficult holes.

“I got frustrated,” Spieth said, looking back at missing the cut in the first two playoff events. I lost No. 1 and was watching Jason Day dominate golf.”

It turned out to be a huge motivator for Spieth.

“This year is unreal,” he said, looking for the words to describe a season that included wins in the Masters and U.S. Open and a near miss at the British then a good showing at the PGA. “I don’t know how we improve on it but we’ll sit down and come up with something.”

Spieth will play at the Presidents Cup in two weeks then he’ll have time to sit and reflect on his sensational year.