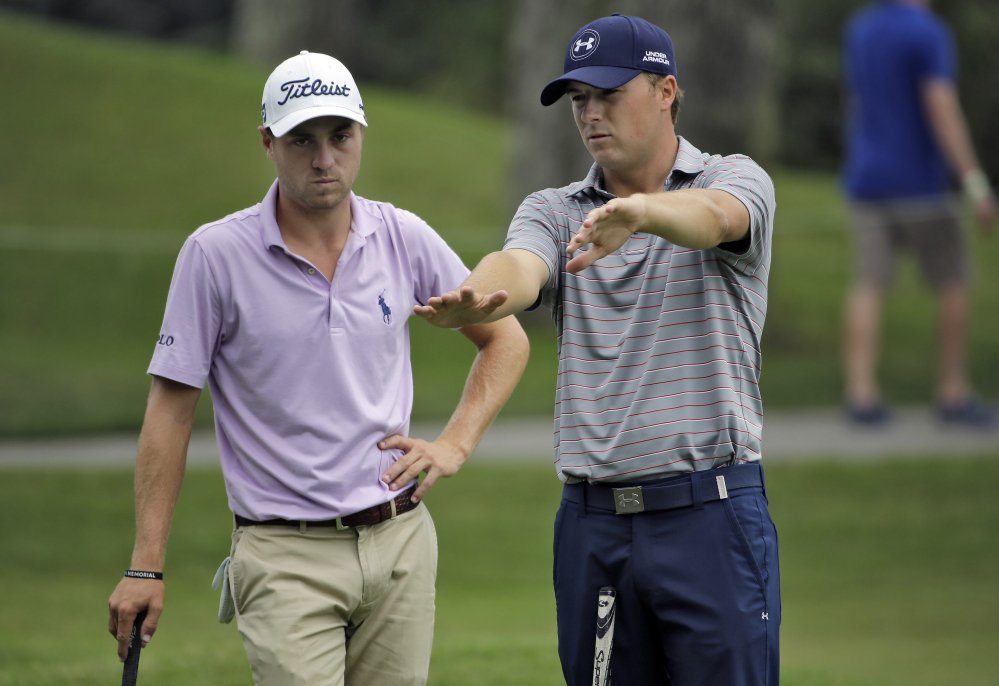 Jordan Spieth and Justin Thomas both opened with nice 67s at East Lake.

The guy with the best chance to win it all at East Lake got off to a rocky start on Thursday.

Jordan Spieth was all over the place early, one-over through his first five holes, not much happening, couldn’t find a fairway.

A lesser player might have gone into a state of panic but not Spieth.  He’s better than that, mentally stronger than that.

“My first five holes I was all over the place,” Spieth admitted after his first round.  “What is this?” he asked himself.  With everything that’s on the line, it was no surprise that Spieth steadied himself,  scrambled a lot early, made a bunch of great par putts than got it going coming home.

“Today we were both on the grind a little bit,” Spieth said of himself and buddy Justin Thomas.  They’re one-two in the standings, going head-to-head for that big $10 million pot.  Both strong contenders, maybe the top two contenders for Player Of The Year.  A great pairing to watch.  Justin, the bomber, Spieth, the putter and master strategist.

That’s the deal for Spieth, he always has a strategy, a plan and he has the mind to make it happen.  He’s been out there long enough now where it’s pretty evident that he could be the best thinker and game-planner on the PGA Tour.  When you look back at Jack Nicklaus, he was mentally stronger than the rest.  He wasn’t the best ball striker, wasn’t the best putter, certainly didn’t have the best short game.  But Nicklaus never beat himself.  He was a master thinker and on-course strategist.

Tiger Woods was the best at the mental game until later in his career he seemingly lost his mind and body.  Up until then, he was the best thinker and a superb grinder.  He could manufacture a score when he didn’t have his best stuff.

Which brings us back to Spieth.  That’s exactly what he did to open things at this Tour Championship, this season finale.

Spieth will let a bad start run off his back, kinda like a duck in the water.

“Over the last nine holes, I seemingly had birdie chances on almost all the holes,” Spieth pointed out.  He only converted one of those.

His run started after the fifth hole when he came up with three straight birdies and went on a run of five straight one-putt greens.  He does that more often than not.  Old news.

He finished the day right where he needed to.  For Spieth, it’s about keeping his eye on the other four players in the top five.  He tied his pal J.T., beat Dustin Johnson (68) by a shot, was four better than Marc Leishman (71) and tied with Jon Rahm.

“Three more of those (67) would be pretty good,” Spieth pointed out.  “It gets harder each day out here, harder on the weekend, tougher when the wind comes  up.”

He was only three back of leader Kyle Stanley, who is a long-shot at best to win on Sunday.

Scan the leaderboard and Spieth is always the guy to watch.  He bides his time, jockeys for position and like Nicklaus, makes sure he doesn’t beat himself.

And that is what makes the kid so darn tough.