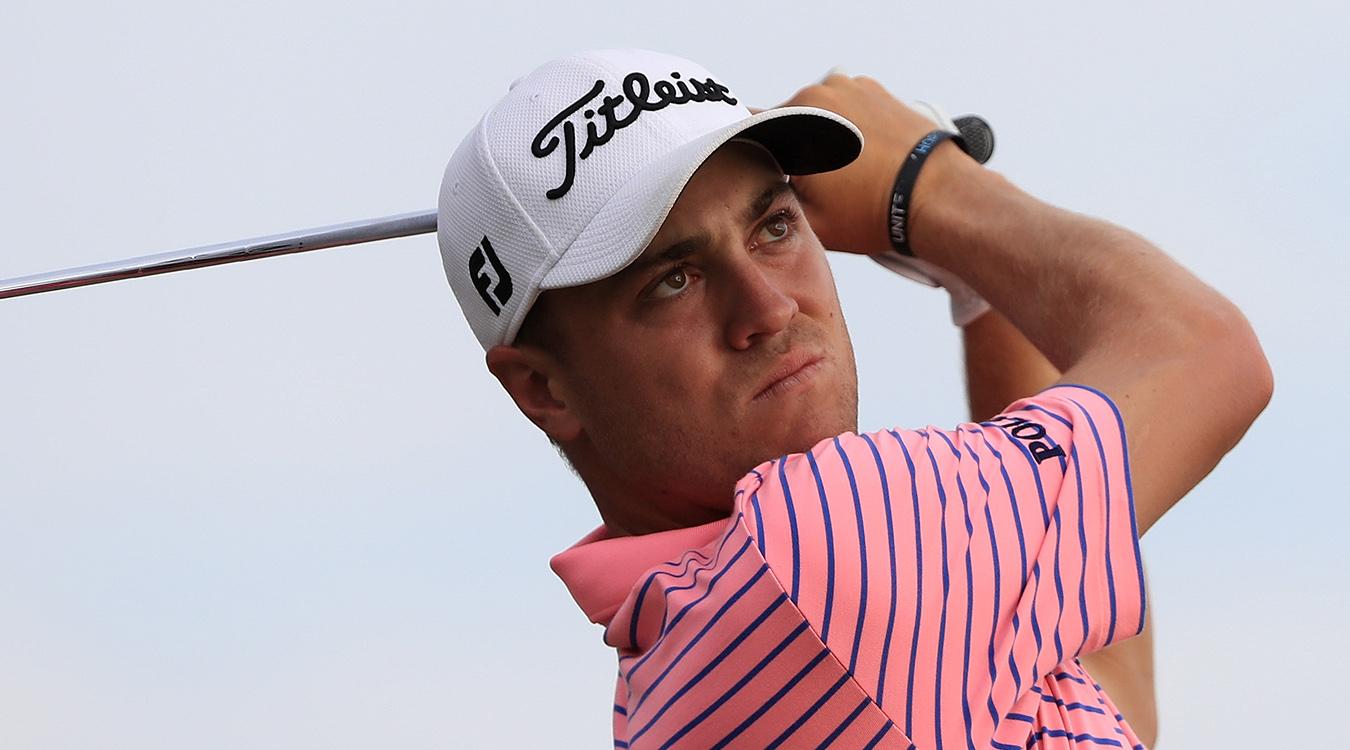 Justin Thomas eagled the 18th hole to take a share of the 36-hole lead.

Day two of the Tour Championship is in the books and just 36 holes to go before a FedEx Cup champion is crowned.  Here’s how things shook out Friday during round two at the difficult East Lake Golf Club:

Justin Thomas stepped up big and has to be the man to beat over the final 36 holes.  He ripped a 335-yard tee shot at 18 then explained his second shot:  “I was in between clubs.  I had 235.  I had to step on a five-iron.”  Boy did he step on it, he hit a high draw in and his ball finished just inside six feet for eagle.  He holed the putt and posted a 66 and is tied for the lead at seven-under. “I was glad to finish off the day with that,” he said.  “I’m looking forward to the weekend.  I haven’t really made anything.”  When he said he hasn’t made anything, he meant it.  His longest birdie putt in two days was a 14-footer.  If his putter heats up just a little, that could be bad news for the rest of the field.

Paul Casey has flown under the radar through the playoffs and has quietly performed well.  His 67 got him a share of the 36-hole lead.  “You have to keep the ball below the hole out there,” Casey said of his East Lake strategy.

Webb Simpson is the party crasher at the top.  Simpson has picked his way around and got to nine-under through 12 holes before a really poor drive at the 13th hole led to a double-bogey six.  It will be tough for him to hang with the power players around him.

Jon Rahm is in perfect position.  His 67 got him to six-under and he’s following the Jordan Spieth formula for success — shoot 67 every day.

Patrick Reed had the day’s best round and his 65 got him in the group with Rahm.  Justin Rose (66) and Gary Woodland (67) are there with Reed.

Jordan Spieth struggled mightily all day.  He missed at least four putts inside six feet and as bad as it was, he birdied the 18th hole to shoot even par 70 for the day.  He’s only four shots off the lead and kept himself in contention.  It’s what Spieth does best, keeps himself in the game even when everything’s off.  Spieth’s in at three-under par where he started the day.

Dustin Johnson’s putter hasn’t been kind to him.  Still, D.J. stands at three-under par with Spieth and is still in the hunt going into the weekend.

Jason Dufner found himself only two shots off the lead after shooting 67.  Duf suffered a wardrobe problem on the back nine.  He blew out a seam in the seat of his trousers bending over to get his ball out of the cup and from that point on, had his caddie retrieve the ball.

Give Pat Perez a lot of credit.  At age 41 he’s made it to East Lake for the first time and after shooting a pair of 68s is four-under and in contention.