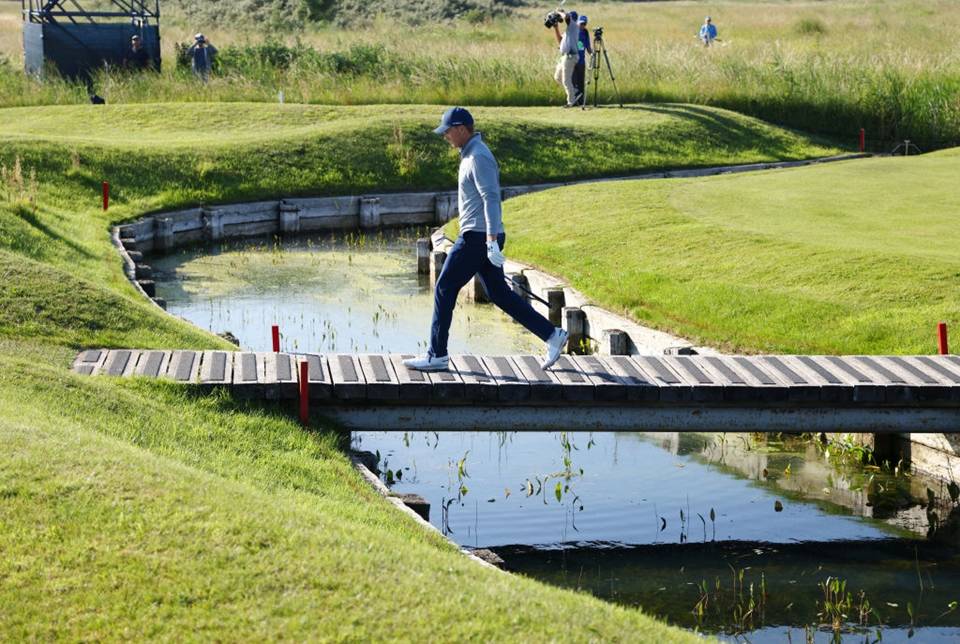 Jordan Spieth was the only player to put pressure on Collin Morikawa on Sunday.

You could imagine the smoke coming from Jordan Spieth’s ears as he walked off the 18th hole Saturday at Royal St. George’s.  He had just missed a two-foot par putt that dropped him from 10-under to nine-under par heading into Sunday’s final round.

“The finish yesterday was about as upset as I’ve taken a finish of a round to the house,” Spieth said Sunday. “I walked in and said, ‘Is there something that I can break?’”

In addition to the miss at 18, he bogeyed the 17th and his approach shot was only about 50 yards.  He messed that up and used his putter three times from just off the front of the green.  Those two bogeys cost him a spot in the final pairing with Louis Oothuizen.

Spieth cooled off overnight and came ready to go on Sunday.

“What good does it do to be upset?” Spieth said. “I came out today (with a mindset that), yes, I should be leading the tournament.  That’s how I felt.  But now I get to play with a chaser’s mentality, which sometimes can be with a bit more freedom.”

Cameras caught Spieth arriving to Royal St. George’s about two-and-a-half hours early Sunday, with only a duffel bag and his putter. Spieth said he wanted to hit a few putts earlier in the morning on his putting rail to dial in his stroke.

Things didn’t start out very well for Spieth in the final round.  He had two bogeys over his first six holes and seemingly was dropping out of contention.   He then reached the par five seventh in two and rolled in a triple-breaking 20-footer for eagle.  He added back-to-back birdies at nine and 10 then two more at 13 and 14.  The birdie at 14 pulled him within a shot of leader and eventual champion Collin Morikawa.

“I did everything I could in the past few hours to win this championship,” Spieth said after his runner-up finish.  Both he and Morikawa closed with 66s and he ended up two shots shy and will look back at the two he gave away late Saturday..

“My putting is not where I want to be at all,” Spieth pointed out.  “It’s progressing in the right direction, but it’s not where it has been.  I know what I need to do to get there, and it’s just very difficult to do.  I just wasn’t extremely sharp with the putter this week.”

It took Bryson DeChambeau long enough enough but he finally got the hang of scoring-friendly Royal St. Georges.  He went bogey-free for Sunday’s final round but it was too little too late for the driver-hating Mad Scientist.  He finished two-under par and tied for 33rd.

Rickie Fowler went out early and put together a five-birdie, one eagle effort.  Two bogeys added up to 65 for Rickie who is starting to trend in the right direction.

Brooks Koepka made a Sunday charge but it wasn’t near enough.  Three birdies and an eagle at the easy par five seventh got him to eight-under par and he tied for sixth — once again getting bragging rights over Bryson in the season’s final major.

Jon Rahm Back To No. 1 , Morikawa No. 3 As World Rankings Reshuffle:

The back-and-forth shuffle between Jon Rahm and Dustin Johnson at the top of the Official World Golf Rankings continues as this week, Rahm is back in the No. 1 spot, D.J. drops back to No. 2 once again and Open champion Collin Morikawa is now No. 3.  Louis Oosthuizen jumped into the Top Ten at No. 9 and Patrick Reed fell out.  Jordan Spieth with his runner-up finish at Royal St. George’s is making his move toward the Top Ten, he’s now No. 14, in front of Rory McIlroy who has dropped to a head-scratching 15th in the rankings.

Here’s how they stand this week:  Official World Golf Rankings:

Meanwhile, over at the Shaving Cream Championship, aka The Barbasol, Ireland’s Seamus Power got his first Tour win at Keene Trace Golf Club outside Lexington, Ky.

The event was plagued by rain for the first two days but by Sunday they were finally back on schedule.  Power and overnight leader J.T. Poston tied after 72 holes at 21-under par.

Poston lost his chance to pick up his second win when he double-bogeyed the par five 15th thanks to an errant drive that went out-of-bounds left.  He still could have won had he not three-putted for bogey at the par three 16th.    He finished with 70 while Power posted 67 ahead of him to force the playoff.

On the first extra hole, Power holed an 18-foot birdie chip from the collar of the 18th green and Poston matched him with a 10-foot putt.  They matched pars on the next four holes, on No. 18 again, then twice on the par-three 17th, and again on 18.

On the sixth extra hole, Poston drove into the water at the 18th and made a bogey.  Power hit the fairway, played his second to 12 feet and two-putted for the victory.

Anirban Lahiri and Sam Ryder finished a stroke out of the playoff, each shooting 65.

Highlight of the tournament was James Hahn’s 60 on Saturday.  He was 10 shots higher on Sunday and tied for fifth at 19-under.