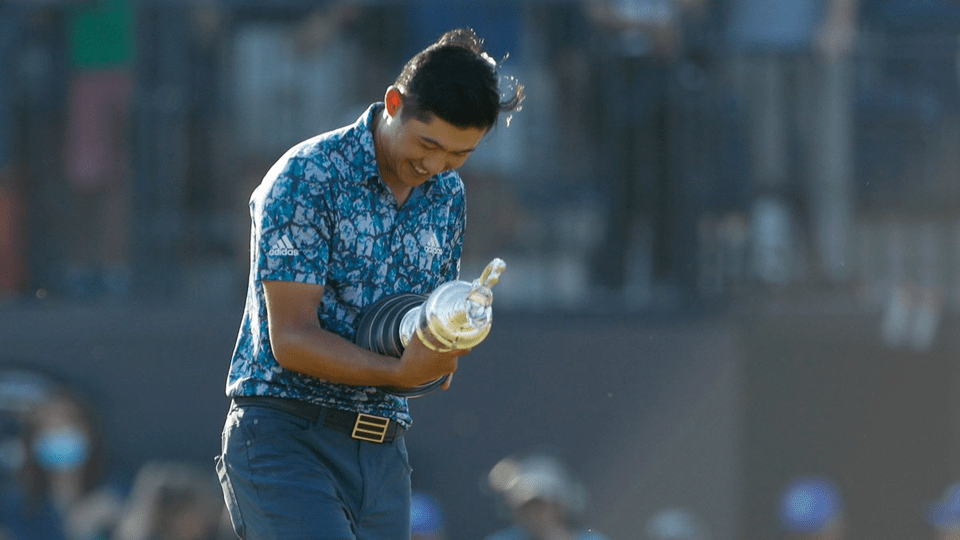 Collin Morikawa is the Champion Golfer Of The Year.

He was cool, he was flawless, he came through in the clutch, made no mistakes on Sunday at the 149th Open Championship and by day’s end young Collin Morikawa was holding the iconic Claret Jug and declared Champion Golfer Of The Year.

Morikawa won his second career major championship in style with a round to remember.  He made very few mistakes and when he did, he came through with magnificent par saves.  He was machine-like, hitting fairway after fairway at firmed-up Royal St. George’s.  He took control of the tournament early with three straight birdies to close out his outward nine holes on an 80-degree day with no wind to speak of.  That 32 going out was good enough to overtake the overnight leader — Louis Oosthuizen — who was overpowered by Morikawa’s show of skill, accuracy and clutch putting.

The world’s fourth-ranked player made two clutch par saves at 10 an 15 and ran in a 20-footer for birdie at the par five 14th when feisty, charging Jordan Spieth had cut Collin’s lead to a single shot.  With a two-shot margin of safety over Spieth, Morikawa calmly ran off pars on the four closing holes.  He missed the 15th green left and his pitch left him with a nervous-looking 12-footer to save par and he ran that one in the middle to set up his march to victory.

Pars came easy at 16, 17 and 18 and he fought off a brave effort from Spieth, who made four birdies and an eagle after two bogeys over his first six holes had him sinking.

In the end, Morikawa had a perfect scorecard — 14 pars, four birdies and a closing 66 that went with his previous rounds of 67-64 and 68.  His 15-under par total established an Open scoring record at Royal St. George’s, two shots better than Greg Norman when he won in 1993 with a 13-under par 72-hole total.

Morikawa’s closing 66 was equaled by Spieth, who will look back on his sloppy Saturday finish at 17 and 18 where he threw away two shots on holes where he was in position for easy pars.

As he accepted the Claret Jug, the first thing Morikawa did was turn the attention away from himself.  He turned his head to the low amateur, Mattias Schmid, congratulated him and spoke highly of the young German.  Morikawa isn’t much older.  At the tender age of 24, he won his second major and in both the PGA and this Open Championship, he won in his first outing, something that hasn’t been done since the great Bobby Jones did it in 1926.

Morikawa warmed the hearts of those on hand with his humble acceptance speech.  He didn’t turn attention to his sponsors, he put his caddie in the spotlight and gave his family a lot of love.

“I wouldn’t be here without my family, my friends, my brother, my girlfriend. They weren’t able to make the trip, normally they make the trip to majors, but I know they have been waking up early to watch me play.  I can feel the love and I hope I get to see them all really soon.”

As Morikawa was basking in victory’s glory, Spieth looked back on what might have been.

“I did everything could.  I made every putt I needed to hole.  It’s hard to be upset when I was a couple over (par) through six.  “At seven, I said ‘we’re going for everything’ and I played the last 12 in six-under.  I needed a break from him (Morikawa) and I didn’t get it.  I did everything I could to win the championship.”

Back at the ceremony, Morikawa summed up week with ease:

“One of the best moments of my life,” he said as he carried the Claret Jug, proudly showing it off to thunderous applause from the packed stands around the 18th hole.

The scary part of this latest victory by young Morikawa is the fact that his career is just getting started.