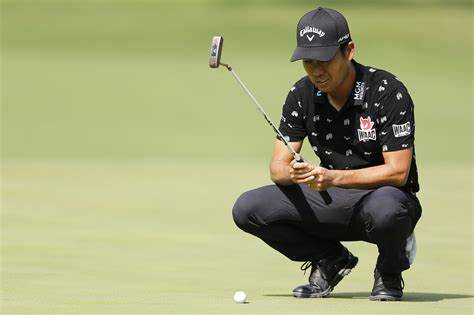 Tough to imagine someone disappointed with a first-round 61 at a PGA Tour event but that was the case for spunky Kevin Na on Thursday at the birdie-fest otherwise known as the Sony Open.

Na hit a magnificent second into the par five ninth, holed a five-footer for eagle at historic Waialae Country Club and made the turn at six-under par.  He then birdied the par four 10th and stood at seven-under with eight holes still in front of him.  “It entered my mind after I eagled nine,” Na recounted, “it” being the magic 59 number.

Na added another birdie at the 12th to go eight-under — all he needed was three birdies over his final six holes.  Didn’t happen.  After five straight pars, he made a nice bunker shot at the 18th and walked in a seven-footer to shoot 61 — nine-under — good for the day one lead.

“I’ve never been disappointed with a 61 — but I was a little disappointed,” Na confessed.  Na’s putter was doing what Na’s putter typically does — roll in putts.  He was into his trademark “walk-it-in” routine.  “I wish I walked in a few more coming down the stretch,” Na said after signing his scorecard.  But it was nonetheless a great start for the defending champion.

Fifty-one-year-old Jim Furyk set the morning mark with an eight-under par 62 and late in the day, Russell Henley had a chance to tie Na for the lead.  Playing in the group behind Na, Henley was just short and right of the par five 18th in two but he chose to bump his third into the steep bank in front of him.  He misjudged the pitch and left himself outside 12 feet for birdie and failed to convert, leaving him with Furyk at 62.

Jason Kokrak, Matt Kuchar and Corey Conners were three of a half-dozen players in with 64s.

Same situation as last week at the Tournament of Champions — little to no wind.  The course had dried out enough for the fairways to run a bit but the rough was up, rewarding the more accurate drivers and Na is one of them.

Hideki Matsuyama, Abraham Ancer, Harris English and Erik van Rooyen, all came over from Kapalua to play this week and opened with 66s.

Tributes To Tim Rosaforte Pour In, But NOTHING From Tiger Woods:

Tim Rosaforte was perhaps one of the most popular and beloved guys ever to cover the game of golf.  It showed as tribute after tribute has poured in from every corner of the golf world.

But there’s one huge name that said nothing — Tiger Woods.

Nothing from Woods, nothing from his came, not even a couple of sentences concocted by The Great Stiney (aka Woods manager Mark Steinberg).

It’s surprising and it’s not.  Tim wrote two books about Tiger Woods:  “Tiger Woods — Making Of A Champion” and “Raising The Bar — The Championship Years Of Tiger Woods.”

Woods was probably miffed because he didn’t get an royalties from the two books.

Bryson DeChambeau confided that his wrist had been bothering him for the last month or so and decided to give it a rest this week rather than play at Waialae.

The Tour’s Mad Scientist also said he’ll be played in the Farmers Insurance Open at Torrey Pines in two weeks before he goes to Saudi Arabia for the controversial Saudi Invitational.

DeChambeau termed his withdrawal “precautionary” and said he was check out by his trainer in Colorado this week.

“It’s been bothering me for about three or four weeks now,” DeChambeau said. “All of this speed training, it’s definitely taking a toll on the actual muscular structure. Initially, when I said my hands were killing me, it was more of the skin. Now it’s just gotten to the point where I’m putting so much speed and force into the wrist that we haven’t been taking care of the wrist.”