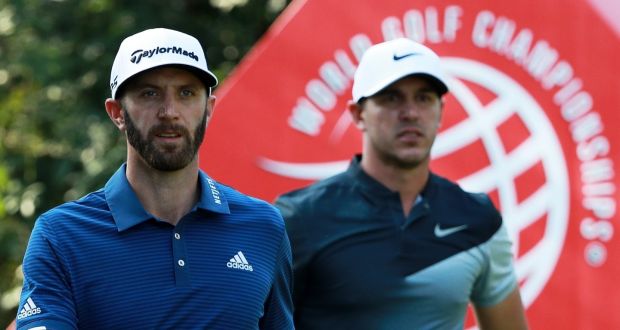 Former buddies Dustin Johnson and Brooks Koepka are two of the big names the NETFLIX deal will feature.

With the exception of the life and times of Tiger Woods, professional golfers are generally a tad on the dull side if you’re looking for some high drama.

Unlike ice hockey, football and basketball, there’s no trash talking on the PGA Tour during big events or any events for that matter.  No fights, no pushing or shoving, no — none of that.  The Tour has long gone out of its way to maintain that “squeaky clean” image.

So you might scratch your head over the news that NETFLIX has decided to film a documentary series that is supposed to take us where no one has gone before when it comes to the lives of some of your favorite stars in the world of golf.  Filming has started and after huddling with their various agents, advisors as well as the producers of the proposed series, a bunch of Tour guys have come on board.

Here’s where it gets even more interesting.  All four of the major championships are on board — even the starched shirts at the USGA and the uber-secretive Augusta National Golf Club.

Here’s where it gets even more interesting — the PGA Tour in and of itself will not demand editorial control when the cameras are at a Tour event.

The Sheriff Of Nottingham (aka tour commish Jay Monahan) had one of his Sinister Band Of Henchmen issues this statement about the NETFLIX series:

“We do not have editorial control.  We will be involved to the extent that Netflix and the producers have the access they need to film at our events. We want them to make a great show, and we all agree the documentary needs to be as authentic as possible.”

Here’s the list of PGA Tour players who raised their hands when NETFLIX asked for volunteers to be in the series (in alphabetical order):

Wow, can’t wait to see the Life And Times of Mito Pereira.

One name you won’t see, ever, in something like this is the Big Needle Mover himself — Eldrick Tont Woods.  No way he lets anyone take a behind the scenes look at him unless they’re willing to cough up an EXHORBITANT amount of U.S. currency.

Can’t wait to see ’em go out to lunch with Harry Higgs.  Wouldn’t it be great to see Rickie Fowler mowing his own lawn?  That’s not happening.

Wouldn’t be a surprise at all if the producers insist on Pauline Gretzky being a big part of any Dustin Johnson segments.  D.J. is the most boring guy around — but there’s nothing boring about Paulina.

When you think about all this for a moment, NETFLIX must be running out of ideas.  Other sports documentaries have been well received, especially the NFL’s “Hard-Knocks.”  But truth be known, teams absolutely HATE when the NFL assigns one of them to be the subject of that series.

This particular series will be shot by Vox Media Studios in conjunction with Box-to-Box Films, the producers of the Formula One series — Driver To Survive.

Sorry, no car wrecks on the PGA Tour, oops, sorry about that Tiger.

NETFLIX is looking to introduce these Tour guys to its younger audience.

For years, one of the great things about being a PGA Tour player is that most can come and go as they pleased without being recognized by anyone other than the most avid watches of the sport.  If Kevin Na was walking through a mall, he’d go virtually unnoticed.  If Max Homa showed up in an airport, no one would know who he is.

Had a friend in Palm Beach County who saw Dustin Johnson come into a Starbucks with his trainer — Joey D — my friend didn’t recognize him, later described him to a golfer and was informed –“Yeah, that was Dustin Johnson.”  Now if it had been Paulina, well, my buddy would have recognized her!

Can’t wait to see Tony Finau taking his band of kids to McDonalds.

Justin Thomas?  There’s another guy you wouldn’t recognize it he was wearing jeans and a t-shirt.

Truth be known, without their caps and logos on their shirts, golfers not named Tiger Woods or Jack Nicklaus go pretty much un-noticed.

You might notice that Jon Rahm, Bryson DeChambeau, Rory McIlroy and Phil Mickelson aren’t jumping into this production.

Bryson had this to say about it:  “There’s a lot of factors going on in that.  One, there wasn’t a deal that was struck that was very well for my side of it.  I love Netflix.  I watch it.  I have a great time with it.  But just for me, it wasn’t right at the present moment.”  Which translates into:  “We’re not getting paid for this.”  And that’s the rumor about this deal — none of these guys who signed up are getting paid — just another reason you’d never see Tiger in something like this.

NETFLIX probably tried to justify it by saying something like:  “It’ll be great exposure for you and benefit your brand!”

Here’s something funny for your perusal — Joel Dahmen is nervous about appearing.

“Excited would be the wrong word. I am apprehensive about the entire thing,” Dahmen said. “I’ve never had anything like this before; unlike some of these other guys I’m not used to having cameras around all the time.”

Raise your hand if you can’t wait for a behind-the-scenes look at Joel Dahmen.

When this series will be available for public consumption is unknown and no one is providing any set dates.

Word has it that filming will go on through the FedEx Cup playoffs.

Best guess here is this docu-series may come out sometime in early 2023.

Just let us know when Paulina will be making appearances.