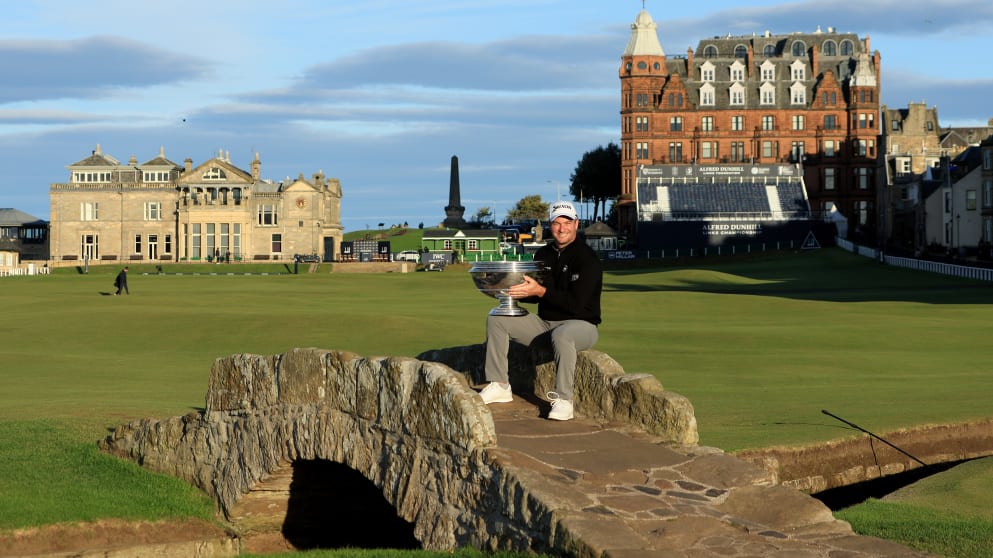 Ryan Fox enjoys his newest trophy while perched on the Swilcan Bridge.

King Of The Links: Ryan Fox Takes The Dunhill

It was four days that probably felt like a week but by the time all the lads and their amateur partners finished the Alfred Dunhill Links championship, Ryan Fox emerged with a day to remember on the Old Course at St. Andrews.

Fox started his final journey on a sunny Sunday (how un-links-like) in this all-links courses championship a full four shots behind overnight leader Richard Mansell, who was trying to win for the first time on the DP World Tour.  But when the 27-year-old Brit found himself three-over for his first 12 holes, the door was open for someone else and it was Fox who took advantage.

Rory McIlroy was making a charge.  After a Saturday 66 on the Old Course got him to seven-under for the tournament, he had an outside shot.  Rory got it going.  He was six-under heading to the par five 14.  But he lost his momentum there, much like he did in the 150th Open Championship.  A par cost him that momentum and a bogey on the Road Hole (he tangled with the Road Hole bunker) ended his hopes.  A birdie at 18 gave him another 66 but his 13-under par total wasn’t good enough.

Fox was five-under on his day through 12 but bogeyed 13 and parred 14.  But a birdie at 15 gave him a three shot lead with three to play.

Things got testy when he bogeyed the Road Hole and he was fortunate to make five.  His drive sailed well left and his second came up short.  His third wasn’t very good and left him 75-feet from the hole and he managed to two-putt to save his five.  An easy par at the 18th added up to a closing 68 and a 15-under par total — one clear of Alex Noren and Callum Shinkwin.

The 35-year-old New Zealander was a late comer to the game but he’s risen to 25th in the world rankings, making many observers wonder how Trevor Immelman could have not chosen him for the International team at the Presidents Cup.

Fox used that as motivation and a sad memory helped him along the final stretch.  He was thinking about Australian cricket star Shane Warne, who was Fox’s partner at this event for the past five years but Warne died last spring.  The two had finished second in the team portion of the tournament last year.

Fox said afterward that Warne was on his mind that afternoon.  “It means a lot. To be honest the only person I can really think of at the moment is Warne.  He meant a lot to me and this event and was a great mate. It’s a terrible shame he’s not here,” Fox recounted after the big win.  “I’m going to enjoy celebrating this one with the family.”

When asked whether he felt Warne’s presence out on course, Fox added: “Yeah, there was definitely some luck out there.  “Obviously I was pretty nervy the last three holes. I didn’t hit very good shots, to be honest, down the 16th, 17th and 18th. He was definitely helping out.”

Fox won this one with an opening 66 on the Old Course on Thursday.  With the winds blowing 30-35 during Friday’s rounds, he survived Carnoustie with a 74.  He made a big move on Saturday with a seven-under par 65 at Kingsbarns and that gave him his chance on Sunday.

As for Mansell, it wasn’t his day at the Old Course.  He started at the winning score, 15-under, but 76 shots later, was was a 11-under, looking up at Fox along with the rest of the field.