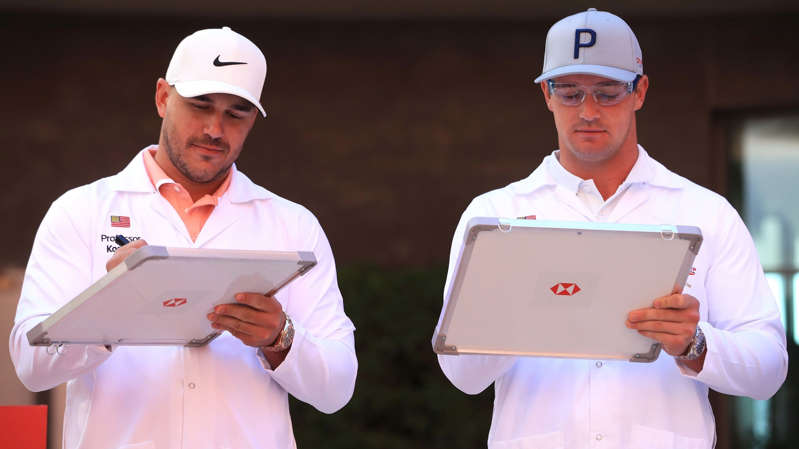 Suffice to say the London tabloids have had a field day with the ongoing feud, rivalry, or whatever you want to call the feelings between Brooks Koepka and Bryson DeChambeau.

The 149th Open Championship once again puts both of the American stars in the spotlight and their rounds were a pure contrast on Thursday.

Brooks was steady but not spectacular on his way to finishing in red numbers with a one-under par 69.

Bryson, on the other hand, had a long, arduous adventure on day one that found him hitting too many shots from knee-high rough.

Of course Bryson started out with his smash-it-and-gouge-it strategy which is not the strategy for success on a championship links course like Royal St. George’s.  DeChambeau, after a birdie at the 18th hole got him back to 71 shots for the day, blamed his driver.

“With the driver right now, the driver sucks,” DeChambeau said bluntly after he finished in the morning wave when low scores were there for the taking.  “It’s not a good face for me, and we’re still trying to figure out how to make it good on the mis-hits. I’m living on the razor’s edge, like I’ve told people for a long time.”

DeChambeau hit no fairways over his first nine holes and landed in only four by day’s end.  Starting at the 12th, DeChambeau began hitting irons off the tee and ran off three straight birdies but bogeys on two of the final four holes left him over par and tied for 74th.

His issues, he said, are all related to his driver.  “It’s not the right design, unfortunately,” he said, “and we’ve been trying to fix it.”

During his round, television analyst Nick Faldo, a three-time Open champion, kept imploring:  “Bryson needs a driving iron, as far as he hits it, that’s what he needs to keep it in play.”

The format switched to best-ball on Thursday at the Great Lakes Bay Invitational and the Jutanugarn sisters went low, really low.

Ariya and Moriya combined to shoot an 11-under par 59 at Midland Country Club after a first-round 67 in the alternate shot format.  They were 14-under par after making their way through a rainy second day in northern Michigan.

“I think just playing together with my sister makes it more comfortable because we can support each other,” Moriya said. “Like when I had trouble or like hit a bad shot she’d cover it, or when she doesn’t hit a good shot, I’m just trying to cover it. It seems like that’s how you should play the best-ball format.  She’s really solid, really consistent,” Ariya said. “Every time she hits the ball I feel like I have no worry, so I know where the ball is going to go. Even if she misses, it’s going to be fine. When you have partners, you have really solid golf, you kind of just go for it, go for the pin and hit it hard, so you have no fear.”

Pajaree Anannarukarn and India’s Aditi Ashok were second after posting a nine-under par 63.

Surprise of the day was the team of Nelly and Jessica Korda struggling and the pre-tournament favorites could only muster a one-under par effort of 69, leaving them at six-under par, five off the lead.

The format switches back to alternate shot for Friday’s third round.