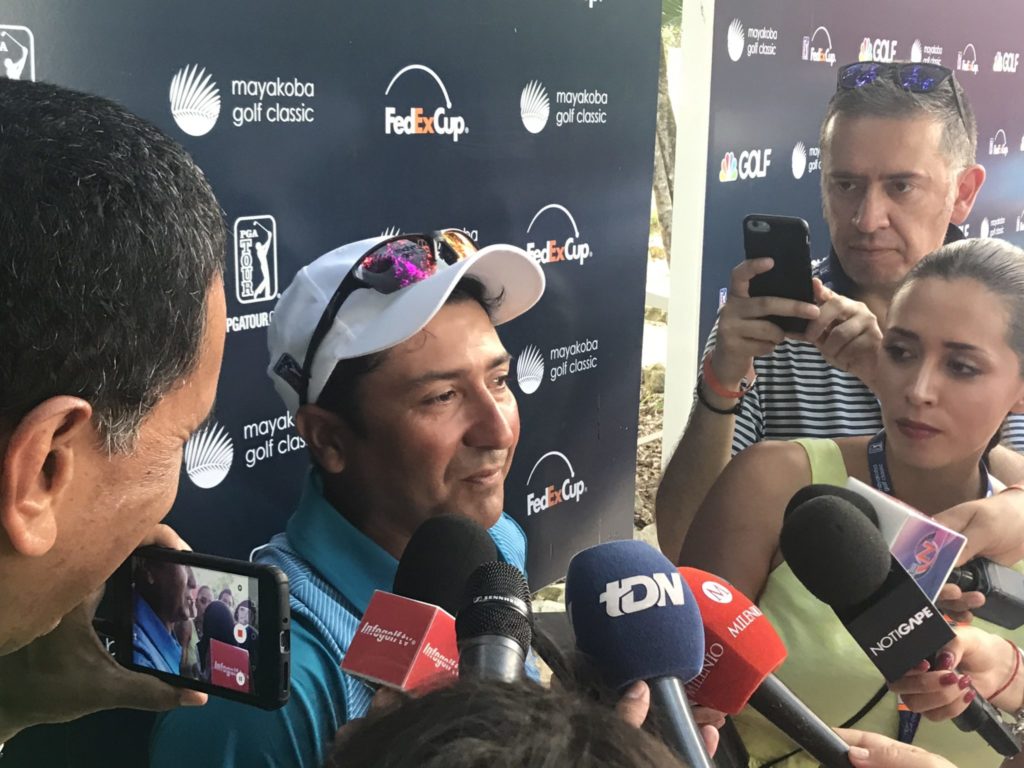 David "El Tucan" Ortiz is still a popular guy at the Mayakoba Resort.

Kooch The Mooch Back At Mayakoba, After A $6.8 Million Season

It was at the El Cameleon Golf Club this time last year when Kuchar snapped a four-year winless streak and pocketed a tasty $1,296,000 for his victory.

The sequence of events that led to  The Great Caddie Mooch  began when Kuchar’s regular caddie, John Wood, couldn’t work that week.  The director of golf at Mayakoba set Kuchar up with one of their best local guys — David Ortiz, aka El Tucan.

Kuchar and Ortiz agreed to a compensation that went like this:  $1,000 for the practice round, $1,000 for the pro-am and $3,000 the rest of the way — total $5,000 for the week.  Seeing as Kooch couldn’t remember the last time he won, there was no discussion for the “What if?”  In this case, the “What if?” being “What if we win?”  El Tucan probably looked up Kooch’s record and he didn’t foresee a win, no doubt Kooch didn’t either.

As things turned out, the “What if” became a “He did!” and Kuchar got his first victory of the season, picked up a second and eventually ended up fifth on the PGA Tour money list with a whopping $6,846,357 to show for his year’s work (not counting endorsement dollars).

After the win, Kuchar was totally happy with El Tucan:

“He was definitely my lucky charm,” Kuchar said at that time. “He brought me good luck and certainly some extra crowd support and did a great job as well. He did just what I was hoping for and looking for.”

Kuchar left Mexico and forgot a little bonus for El Tucan.  You’d think he would have taken care of that after the win, after all, it would have been the right thing to do.  Call it a big tip, if you will.

But no, nothing extra for El Tucan.

Former PGA Tour player Tom Gillis busted everything wide open when Kuchar was in the process of winning the Sony Open in Hawaii.

That tweet from Gillis started “Caddie-Gate” for Kuchar.  The situation started to go viral while Gillis continued to discuss the matter on Twitter.

Yeah, Kuch was right, it wasn’t $3,000, it was $5,000 and Kooch The Caddie Mooch became the tour’s most notorious cheap-skate.  This choir-boy character who earns a big chunk of endorsement money for his “good-guy” image was suddenly exposed.

Finally, Kuch relented, most likely at the “urging” of his agent and sponsors, and forked over an additional $45,000 to El Tucan.

El Tucan probably won’t be caddying this week but he is grateful for the cash infusion and harbors no bad feelings for the tightwad from Georgia Tech.

“Kuchar is a good person,’’ Ortiz said.  “I’m not angry. Everything is good. Not paying was not good. But I have no anger.’’

Ortiz used some of the money to do some modest remodeling of his home.  He got a new cell phone and bought a used BMW to get to his job — he still caddies at Mayakoba and has become a popular guy — guests of the resort request him by name to caddie for them.

Guess you could say he’s living happily ever after.

As for Kooch The Caddie Mooch, yes, the rich get richer.  Note, Kuchar didn’t seek out Ortiz this week, no greeting, no hugs or handshakes.  Nothing.

And the entire incident brings back an old saying:

“Who are you when no one’s looking?”

Perhaps Kuchar learned something from this.