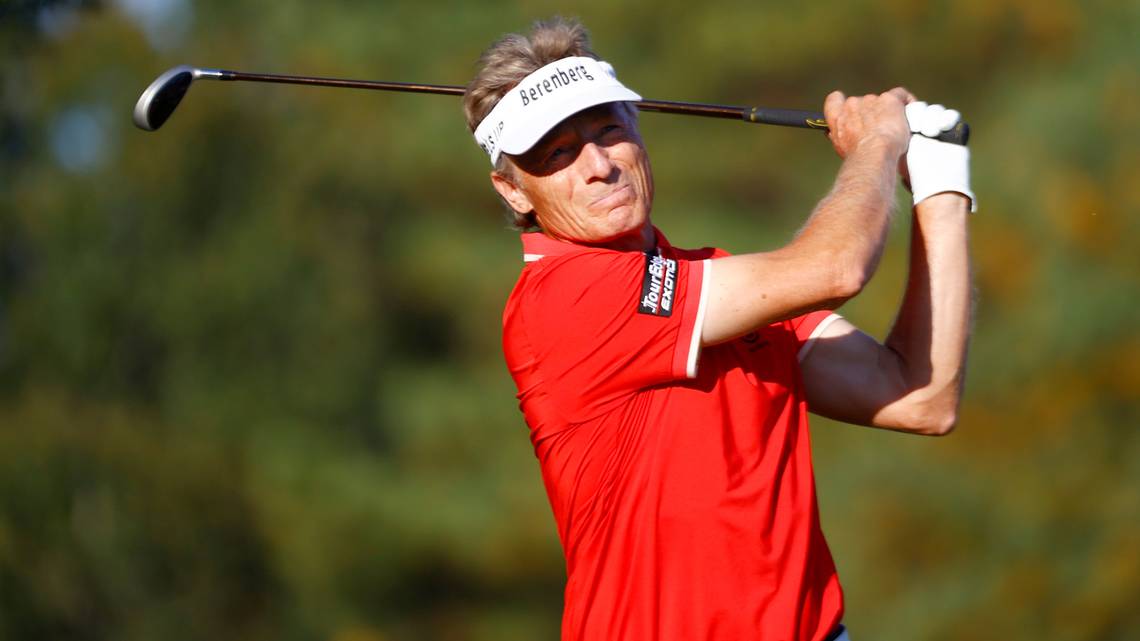 Bernhard Langer beat Doug Barron with a birdie on the first playoff hole.

Bernhard Langer is the gold standard on the Champions Tour and he proved it once again on Sunday at the Dominion Energy Classic.

The ageless Langer emerged from an battle royal at the Country Club of Virgina’s River Course and came away from the first round of the Charles Schwab Cup playoffs with senior win number 42.

The 64-year-old had to go an extra hole to defeat Doug Barron.  Both finished at 14-under par for 54 holes.  On the first trip back down the par five 18th, it was a short game contest as both just missed the green in two.  Barron was on the left side — pin high, Langer, long and a bit right with the more difficult of the two shots.  Barron’s third stopped just five feet from the hole.  Langer used his putter to go up and over a greenside slope and stopped his putt inside Barron’s — four feet.

It was Barron’s first-ever career playoff and perhaps the nerves got him as he powered his birdie putt through the break, it caught a piece of the lip and still went another three feet past.  With the short one for the win, Langer called on his depth of experience and calmly rolled his in for the victory, becoming the oldest-ever winner on the over-50 circuit.

“I’ve been knocking on the door — I’ve lost a bunch of playoffs.  I felt like this may be the time.”  And it was.  Langer and Barron emerged over the final four holes — earlier, overnight leader Steve Flesch, Steve Alkar, Tim Petrovic and Ken Duke all got in the chase.  But in the end it was Barron finishing a hole ahead of Langer with birdie at 18 to post 14-under, a shot ahead of the 14-year senior veteran.  Langer answered with his own birdie, as he hit the green in two and two-putted to tie Barron.

“An awesome feeling,” Langer said as he took a huge lead in the race for the Charles Schwab Cup.  It’s a familiar scene for him.  “I’ve been fortunate and blessed to have been there so many times,” Langer acknowledged.

Flesch failed to close the deal once again but took consolation with a birdie at the 18th that got him to 13-under and solo third.

Ernie Els closed with an incredible nine-under par 63 that jumped him to 11-under par and he tied for fourth with Duke, Petrovic and Alkar.

Phil Mickelson had a miserable week.  Lefty shot 71-74-71 and made quadruple-bogey nines at the ninth hole on both Saturday and Sunday.  He tied for 47th, even par.

The playoffs continue in two weeks at the Timber Tech Championship in Boca Raton.

World No. 2 Dustin Johnson is one of at least seven players who are seeking a waiver from the PGA Tour in order to play in the 2022 Saudi International Championship in Saudi Arabia.

The tournament is scheduled for February 3-6 at Royal Greens in King Abdullah Economic City.  The Tour has said it would deny waivers to take part in the tournament as the Saudis are seeking to bankroll a rival professional golf league.

Along with Johnson, Abraham Ancer, Jason Kokrak, Kevin Na, Lee Westwood, Tommy Fleetwood and Henrik Stenson are seeking waivers.  The tournament pays massive appearance fees to name stars to get them in the field.

Without a release from the Tour, players competing could face sanctions.  The status of the waiver requests won’t be known until early January.

Mental health of professional athletes has been in the headlines but this is a new one.

John McLaren, the caddie for Paul Casey, will be taking time off to deal with mental health issues.

McLaren is 55 and apparently the stress of the pandemic, exhaustive travel, quarantines and COVID tests have taken a toll on him.

“The accumulation of the last 18 months of travel, the testing, the uncertainty has taken its toll, not only on me, but how I am at home with my family,” McLaren said recently.  “And once that starts to have an impact on my young children and my wife, whom I very much love, then the questions start to arise about the sacrifices relative to what needs to be gained.

“Each weekend I’d be sitting basically with my fingers crossed, hoping that I was going to test negative so that I could get home,” McLaren added.  “And then the flip of that, obviously when I got home, I’d have to do more tests and isolating at home, et cetera, while planning to come back to work for Paul, thinking, well now I hope I don’t test positive with my family and children because then that’s then going to make Paul’s life not as comfortable and easy because he’s not certain his caddie is going to make it back.”