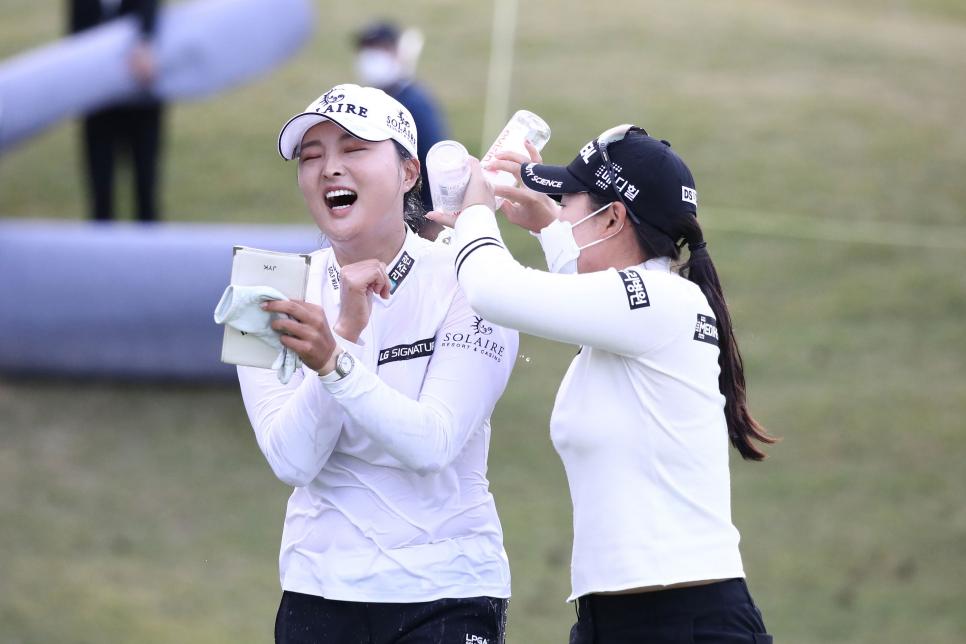 Water shower? Evidently there was no champagne available to douse Jin Young Ko.

Don’t look now Nelly Korda but there’s a fast-moving train coming up fast behind you and its name is Jin Young Ko.

All Ko did was shoot a final round 64 to tie Lim at 22-under par.  Lim, shot 68 but still found herself heading to the first playoff hole against the world’s No. 2.  The playoff was over quickly as Ko stuck her approach to inside three-feet and downed Lim with birdie.

In the process, Ko notched a 200th LPGA Tour victory by a South Korean player.

“This is a tremendous honor,” Ko said.  “And I think it’s very fortunate that I am the player, the 200th-win player, and I actually think that it’s really fortunate that it was an event held in Korea as well. And obviously being the player of the 200th win of the Korean player was not a goal that I was working toward.  It just happens so that I was really focused and I did my best, and this came along. So I’m very happy and satisfied.”

The win should get Ko back into the No. 1 ranking, knocking Nelly Korda from that pedestal.  Korda was not in the field this week.

This win comes with other accolades for Ko. There are two events left on the LPGA Tour calendar, but Ko has clinched the Leaders Top 10 competition and the $100,000 prize that goes to the player who finishes the season with the most top-10 finishes. Her win also puts her ahead of Korda on the Rolex Player of the Year points list. She leads by 15 points.

The win at the BMW is Ko’s second win in her last two starts after taking the title at the Cognizant Founders Cup and her fourth in 2021, the most of any player. A week prior to Founders Cup, Ko finished T-2 at the ShopRite LPGA Classic. It shouldn’t come as a surprise with those finishes that after the BMW, Ko will  regain her spot as the No. 1 player in the world when this week’s rankings are updated, overtaking Nelly Korda, who was not in the field at the BMW.

Ko’s hot streak has other implications as well.  There are just two events left in the LPGA Tour season and Ko has clinched the Leaders Top 10 race and the $100,000 bonus that goes with it.  The win also put Ko ahead of Korda in the Rolex Player Of The Year points list — she’s 15 up on Nelly.

For two days Denmark’s Jeff Winter looked like a world-beater and for two days he looked pretty ordinary at the Mallorca Open but a pair of 62s were good enough to earn him his first European Tour victory.

All he could manage on Sunday was an ever-par 70 over the final 18 holes at Golf Santa Ponsa but he got the job done.  Even an 18th hole bogey didn’t stop him from taking the trophy — his 15-under par total was good enough to beat Spaniards Pep Angles and Jorge Campillo and Sweden’s Sebastian Soderberg by a shot.

There were low scores galore until the final 18.  There was a bit of win and add the final round pressure and it was Angles who had the best round of the top four, a three-under par 67.  Campillo shot 69, Soderberg 68.

Winther’s 62s on Thursday and Saturday tied his lowest round on the European Tour.

“It’s unbelievable (to win with his family here), it’s not sinking in. I couldn’t have a better week. I said at the start of the week that this was going to be like a holiday and apparently holidays work out for me.”