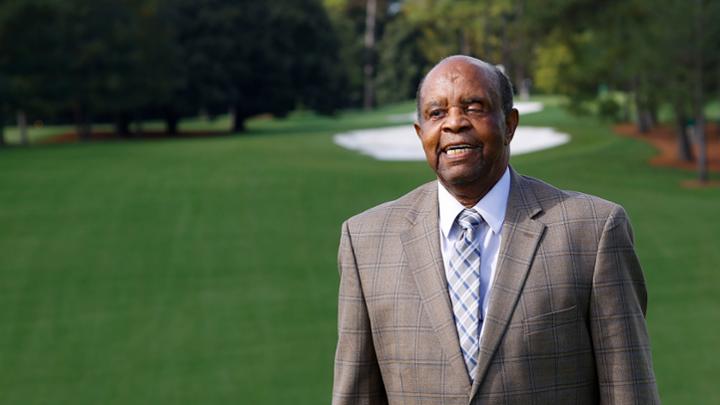 Lee Elder finally gets a long-awaited honor from Augusta National.

This one’s been long overdue but Lee Elder will finally receive his proper spot in the lore of The Masters.

It was 45 years ago that Elder became the first African-American to play in The Masters.  He was a trailblazer.  On Monday, ANGC Chairman Fred Ridely announced that Elder will join Jack Nicklaus and Gary Player as honorary starters for next April’s tournament.  In addition, the club will be establishing scholarships in Elder’s name at nearby Paine College, one of the nation’s Historic Black Colleges.

Elder was 40 when he was invited to play in the 39th Masters.  At that time, Lee’s words were short and simple:  “I belong.”  Elder got the big phone call from Ridley last week.  It came early and after he finished his breakfast, Elder said he shed some tears of joy.  “It was such wonderful news. It’s something I’ll cherish for a lifetime.”

“At age 40, playing in the 39th Masters, Lee delivered a simple but strong message that resonated throughout the world. That message was unequivocal: ‘I belong,’” Ridley said. “The courage and commitment of Lee Elder and other trailblazers like him inspired men and women of color to pursue their rightful opportunity to compete and follow their dreams. But in reality, that opportunity is still elusive for many. We have a long way to go, and we can and we must do more.”

There hasn’t been a first-time participant in The Masters who went on to win since Fuzzy Zoeller back in 1979.  How has the best chance to break that drought/jinx?  How about young Matt Wolff, who went head-to-head with Bryson DeChambeau at Winged Foot?

Augusta National Golf Club has many “secrets” if you will.  One is the ability of the club to bring in fully-grown, mature trees and plant them in “strategic” spots to chance sight lines for long hitters who look to cut corners on certain holes.

The Masters is constantly evolving and one of the changes his year is the elimination of the 10 stroke rule.  In previous Masters, any player within 10 shots of the lead after 36 holes made it to the weekend.  Now it will simply be the top 50 and ties.  It’s not clear if this is a permanent change.  Thought is it was necessitated by the shorter amount of daylight in November.

It may be sports longest-running television contract.  This will be the 65th year that CBS has broadcast The Masters.  But even The Masters takes a back-seat to the NFL   Sunday’s final round will start early so golf can be off the air in time for CBS to do it’s 4 p.m. NFL game.

Fred Couples rarely makes equipment changes.  He’s used the same 3-wood for 12 years and the same set or irons for 10 years.  But he’s finally made a change.  He’s put the PING G425 LST driver in his bag and benched his old Bridgestone dual pocket irons a set of PING i210 irons, which have a similar look to those old Bridgestones.

Speaking of PING, the company has signed Bubba Watson to a lifetime contract.  Does that mean they’ll still be cutting him checks when Bubba turns 70?

AGNC Chairman Fred Ridley announced Wednesday that the Club and its partners at AT&T, Bank of America and IBM are making a combined contribution of $10 million to the Augusta community that will help spur the redevelopment of the nearby Harrisburg and Laney Walker neighborhoods, a noteworthy but historically underserved portion of the city’s urban core.

The money will support the ongoing efforts led by the Medical College of Georgia Foundation, the Community Foundation for the Central Savannah River Area (CSRA) and the Boys & Girls Club of the CSRA. The four $2.5 million donations will provide the majority of funding for the first phase of this transformational project, which includes the construction of an innovative community center and a new headquarters for the Boys & Girls Club.