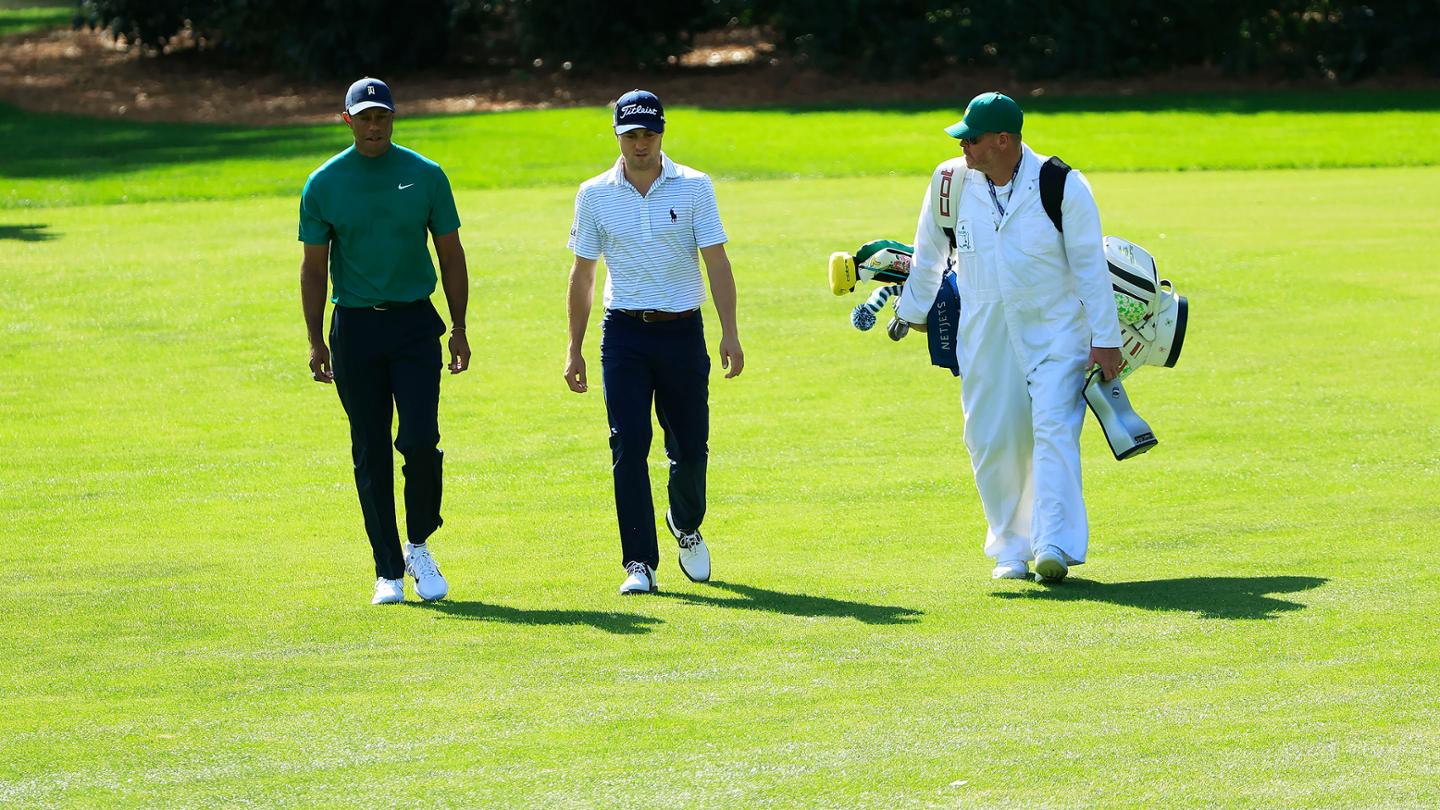 "Hey Tiger, sorry but this year you'll be putting the jacket on me!"

Tiger Woods — Can He Really Be A Factor At 84th Masters

Tiger Woods has been pretty awful since golf returned after COVID-19 shut down sports world-wide.

Last August, Woods finished tied for 58th at the Northern Trust ad tied for 51st at the BMW.  Once again, he didn’t make it to East Lake.

He managed a top 40 at the PGA, finishing in a tie for 37th — no big deal.  He was 10-over through 36 holes at Winged Foot and missed the cut at the U.S. Open.  In late October, his last tournament appearance, he was way off at the Zozo, finishing one-over par and in a tie for 72nd.

After that poor showing at Sherwood (Zozo), Tiger had this observation after he was finished:

“The only thing I can take out of this week that I did positively is I putted well. I feel like I rolled it great.  Unfortunately they were all — most of them were for pars and a couple for bogey here and there but not enough for birdies”

Tiger tried to put a positive spin on it but it simply was not true.  For his four days at Sherwood, Tiger lost more than three strokes to the field on the greens. Of the 77 players in the field that week, Tiger was 65th in putting.  So his claim t have “putted well” simply didn’t hold true.

It was Woods’ second-worst performance on the greens since the restart, and it’s noteworthy because Tiger was in the midst of his worst form with the putter of his career.

So what should we expect from him this week?  Will his putter suddenly start working?

After his prep work on Tuesday, Tiger met with the sparse few media members on site.

“I haven’t put all the pieces together,” Woods admitted, “and hopefully that will be this week.”

Notice that word “hopefully.”  Hope is your worst enemy in the market place and on the golf course, especially at a major.

Tiger did confirm that physically, he’s fine.  “My body is feeling better than I did last year, so it was a little bit easier to hit those shots,” he said, talking about the high draws. “Hopefully this year, I’ll be as consistent as I was last year. Last year, I was able to hit a lot of really good iron shots and I putted great. I had a great feel of the greens.”

Notice, once again, the use of the word “hopefully.”

Then he concluded, using it again: “Hopefully I get the same feel as I did last year and put it all together.”

What will be new and a total challenge for Woods is his tee time on Thursday.  Tiger goes off on the 10th tee early, very early at 7:55 a.m with amateur Andy Ogletree (the 2019 U.S. Amateur champ) and Open champion Shane Lowry.  It’s a difficult start — 10, 11 and 12 present a much bigger challenge than holes one, two and three.  Starting off 10 in The Masters will be a first-ever for Woods.