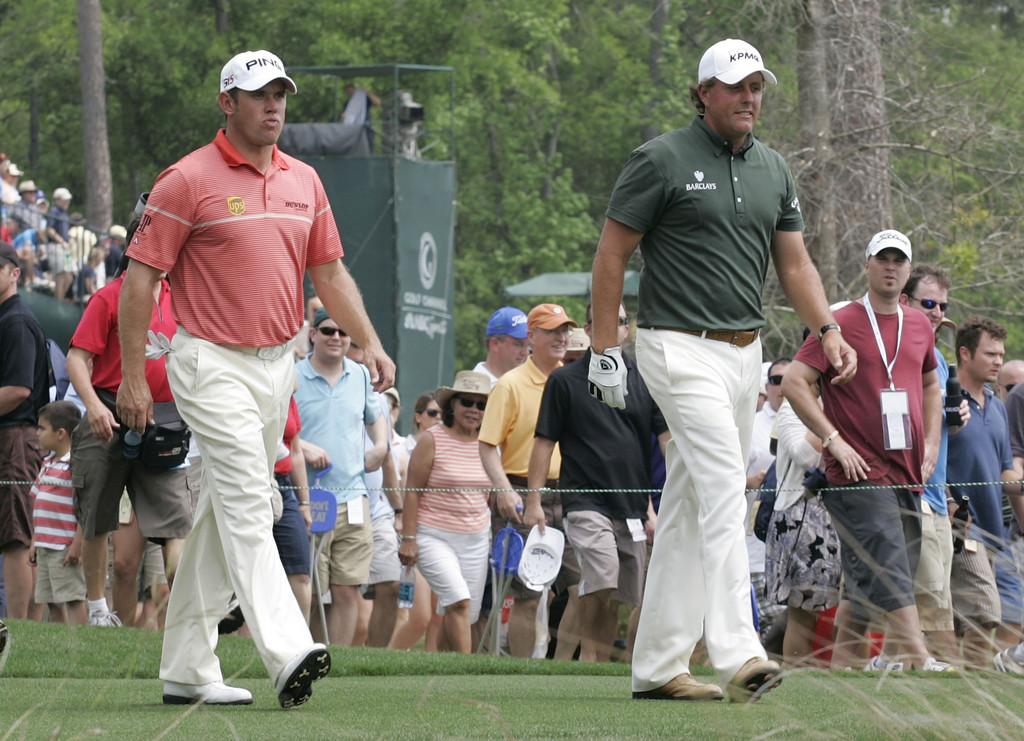 Lee Westwood is 49, Phil Mickelson is 51 -- both are prime for the LIV Series.

It’s becoming more and more clear as to which PGA Tour and DP World (European Tour) players are prime for defection to the struggling, fledgling LIV Series that is being bank-rolled by those controversial Saudis and headed by The Lamest Commissioner In The Land — and that would be one Greg Norman.

It’s becoming less foggy, and what that LIV Series may end up with are not exactly players you’d want to roll out of bed on any given day and pay a ridiculous amount of money to see.

What we’re looking at, is what they used to call the old Washington Redskins of the late 60s — The Over-The-Hill Gang.

The actual face of this LIV Series is looking more and more like it’s going to be Old Lefty Himself — aka Phil Mickelson.

Mickelson is wallowing deep in the LIV mire, getting himself all muddy with his new best friend — The Lamest Commissioner In The Land, aka Greg Norman.  Phil has long been a lightning rod for controversy and he’s escaped discipline from the PGA Tour the way the old “Teflon Don” himself aka John Gotti, used to escape the long arm of the law.  But Phil’s finally taken an even deeper plunge into the pit of mire that is the LIV Series and he’s been in hiding for a while now, probably serving some unknown length of suspension from the PGA Tour.

With his sponsors jumping off the S.S. Mickelson like it just hit a Titanic-like iceberg, Lefty’s cash-flow has to be suffering and with his propensity toward gambling, it’s difficult at best to get a clear picture of his finances.

So it makes perfect sense that if the Saudis have instructed The Lamest Commissioner In The Land to throw bags of money at Mickelson (cue the Kenny Rogers hit, The Gambler), then it would be totally believable that Lefty will abandon the PGA Tour, permanently, to dive into the Saudi Money Mosh Pit.

Here’s our guess-timate as to who might be defecting to the LIV Series:

Mickelson:  Phil will be the face of the league.  The PGA Of America released the final field for its major championship at Southern Hills next week and Lefty is on the list.  He’ll have to face the Media Music, no doubt.  At age 51 and now ranked 58th in the world — makes sense for Lefty to go for the Money Grab, as Rory McIlroy termed it.

Lee Westwood:  Westy’s long in the tooth at age 49.  Not that many huge paydays left.  He’s currently ranked 64th in the world.

Sergio Garcia:  Sergio basically confirmed he’s leaving the PGA Tour when he threw that hissy-fit at the Wells Fargo last week.  He’s 42 and his majors exemptions, with the exception of The Masters, run out after this year.  Would anyone miss him?

Ian Poulter:  Age 46, ranked No. 80 in the world.  Would be giving up hopes of being a future Ryder Cup captain and the same goes for Westwood and Sergio.

Martin Kaymer:  One time a world’s No. 1 and he’s one of those that Norman is referring to when he says he has former No. 1s signed up.  Kaymer has fallen off the face of the earth, his game is shot and he’s ranked 195th in the world.

Richard Bland:  At age 49 re-invented himself on DP World Tour with a victory.  He’s climbed to No. 56 in the world, that got him in those fat WGC events.  But the long-time journeyman is a perfect guy for the LIV Series.  Would you pay $150 to go watch him play?  We’ll answer that for you — Oh Hell To The No!!

Kevin Na:  Can’t say for sure but he may be in the London event.  Na is No. 33 in the world, has five PGA Tour wins and is 38-years-old.  It would be a mild surprise to see him become a full-time defector when the series moves to the United States.

Truth be known this thing is totally up in the air.  Guys who can’t get in the U.S. Open will no doubt ask for releases/waivers for the London event and the PGA Tour will most likely grant them.

But when Norman shifts his circus to the States — well, that’s gonna be interesting.