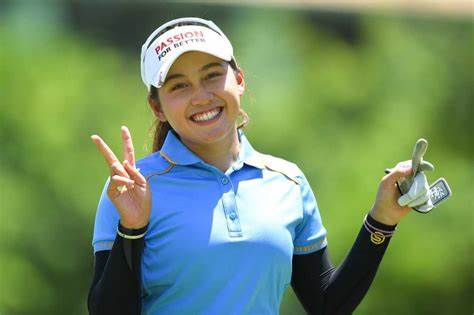 Teenage Atthaya Thitikul got her second win of the season.

Posted By: Tom Edringtonon: September 26, 2022In: In Other News...No Comments

Nineteen-year-old Atthaya Thitikul may be the most talented young star on the LPGA Tour and she proved it again in a Sunday playoff with big-name star Danielle Kang.

Thitikul put herself in position for her second win of the season when she drained a 20-footer for birdie on the 71st hole at Pinnacle Golf Club.  That got he to 17-under and seemingly in great shape.  Little did she know that up ahead, Kang created some fireworks at the NW Arkansas Championship.

Kang, three groups ahead, had birdied the 16 but was two behind standing over her third into the par five 18th.  She was left of the green in two and her pitch shot found the bottom of the cup for an eagle and she posted 17-under, finishing the day with a seven-under par 64.  Kang said afterward that she was in tears just being in contention after taking months away from the game to treat what she described as a tumor on her spine.

As for Thitikul, she thought par at the 18th would seal the win.  “I didn’t see a leaderboard until 18,” The teenager said. “I thought a par would be good enough (for the win).”  It wasn’t and she signed for 68 and headed back out to face Kang in a playoff.

The playoff began on the par-three 15th, which sits next to the 18th green. Both players made pars and moved on to the difficult par-4 16th. Thitikul hit a clutch approach shot to 8 feet from 153 yards. She drained that putt for birdie and the win.

“On the second hole (of the) playoff, I had a chance to make a birdie, because it was not that far. Then, in my mind, I just told myself, ‘Do your best, even it’s not going in. Just do the best you can.’  Thitikul  said.

Steve Flesch picked up his second Champions Tour victory Sunday with a closing birdie on the famous 18th at Pebble Beach at the Pure Insurance Championship.

Flesch shot a final round 68 and was 11-under par, a shot better than Ernie Els, Steve Alker and Paul Stankowski.

The lefty got off to a fast start with four straight birdies to start his final round.  Things got testy over the final nine but he managed that birdie on 18 for the win.

Els had the day’s best round, a 64 but he came up just short of his first win of the season.

Alker, who leads the Schwab Cup standings, was trying to win for the fourth time this season.

Migliozzi started the day five back of Hojgaard, the overnight leader.  He put nine birdies on his scorecard at Le Golf National, including five on the back nine, including the tournament winner at the par four 18th.  He hit his approach within six feet and sank the putt for his third DP World title, his first after a three-year drought.

As for the younster, Hojgaard, he can look back at his second hole during Saturday’s third round where he hit three balls in the water at the short, 146-yard par three and took a quintuple-bogey eight and know that cost him dearly.

“It was one of those days that I love to play golf. I love to battle on the golf course and today I received something back from golf. It was a beautiful day of golf,” said the 25-year-old Italian.

“I was trying to be more comfortable on the course and at the start of the weekend I was 13 shots back but yesterday Rasmus missed the second hole and it almost opened the door again and I just kept playing great,” Migliozzi said afterward.

As for his second into the 18th that proved to be the winner — “The shot was something incredible. I went for it and it paid off. My caddie was not happy: it was not the real strategy but I felt I could try.”

On a side note, LIV defector Patrick Reed, who is desperate for world rankings points, showed up and shot 73-72 and missed the cut by three shots.