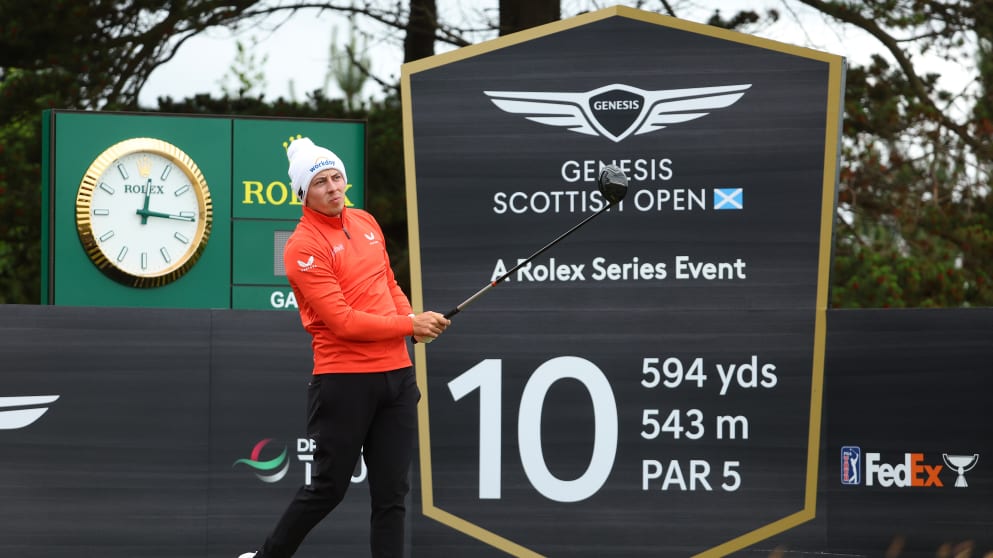 Things were a bit chilly for Matt Fitzpatrick during a practice round.

Cameron Tringale went out early on Thursday morning at the Renaissance Club.  He got off to a so-so start but by the time he finished nine holes his game started to heat up in a big way.

The wind was down, very mild and when that happens, you have to make your move and Tringale did that over the inward nine.  He reeled off six straight birdies and promptly put the “59-Watch” into effect.  He was pin-high in two at the par five 16th and that’s where his momentum came to a screeching halt.  He missed a five-footer for birdie then parred 17 and 18 to shoot a nine-under par 61, tying the competitive course record.

Later in the day, as the afternoon wave went out, the winds came up off the Firth of Forth, blowing 20-25 miles per hour and basically guaranteed that Tringale would be safe as the first round leader.

That’s the way it is in Scotland.  If you don’t like the weather, wait an hour, it will change.  It was still a relatively mild, shirt-sleeve kind of day but big names couldn’t accomplish much in the afternoon.  Jon Rahm fared well with 68 but Scottie Scheffler (73), Justin Thomas (73), Viktor Hovland (74), Matt Fitzpatrick (71), Collin Morikawa (71) and Will Zalatoris (71) were all over the course par of 70.

Ian Poulter, who went to court to gain a stay to get in the field, fell flat on his face and shot a very LIV-like 78 that tied him for 151st, all but guaranteeing him an early exit on Friday.  Same for another LIV defector, Jason Kokrak.  He shot 76.  Defending champion Min Woo Lee won’t be repeating as champion after he opened with 77.  Best score from the afternoon groups was 66 from Kurt Kitayama.

That’s the way things can turn on a links course and this one isn’t that difficult, not like it’s neighbor to the northeast — stately Muirfield.

Tringale had his chance to become the second man in DP World Tour history to shoot 59 — but the missed birdie at 16 basically squashed those hopes.  Tringale wasn’t even thinking 59 if you listen to what he said afterward:

Putts were falling for Tringale with three front-nine birdies then his ball striking got better.  “Middle of the round, my striking matched my putting. It’s the only way it can happen.”

Tringale is one of those examples that shows a player doesn’t have to win to succeed on the PGA Tour.  His best showing this year was a tie for third at The Farmers.  A total of four top 10s have gotten him to No. 55 in the world rankings and 37th in the FedEx Cup standings.

And he was fortunate enough to experience that “good side of the draw” on Thursday.

As the day wore on, the winds were steady at 20-25 miles per hour with more expected on Friday.

Welcome to links golf — after all, the wind is the only thing that keeps guys from doing what Tringale did on Thursday morning.

Early Friday Update:   Matt Fitz-magic got it going early.  He started on the back nine and put four birdies on his scorecard then made the turn and added two more at the second and fourth holes to get to six-under for the round, five-under for the tournament.  Unfortunately for Fitzpatrick, he lost all his momentum with a bogey-bogey finish on the eighth and ninth holes.  He shot 66 and was in at three-under for 36 holes.   Collin Morikawa went the opposite way.  After his opening 71, the reigning Open champion was six-over for his first 13 holes and seven-over for the tournament through 13 holes, pretty much guaranteeing himself an early exit.  Morikawa finished with 74 and was five-over and heading for St. Andrews early.  Ditto for Will Zalatoris (71–74).  Same for LIV-loving Ian Poulter, who opened with 78, added 72 to that and finished 10-over par.  They pay big bucks for poor performance on the LIV but in the world of real competitive golf, Poulter got to leave after two rounds with no paycheck.