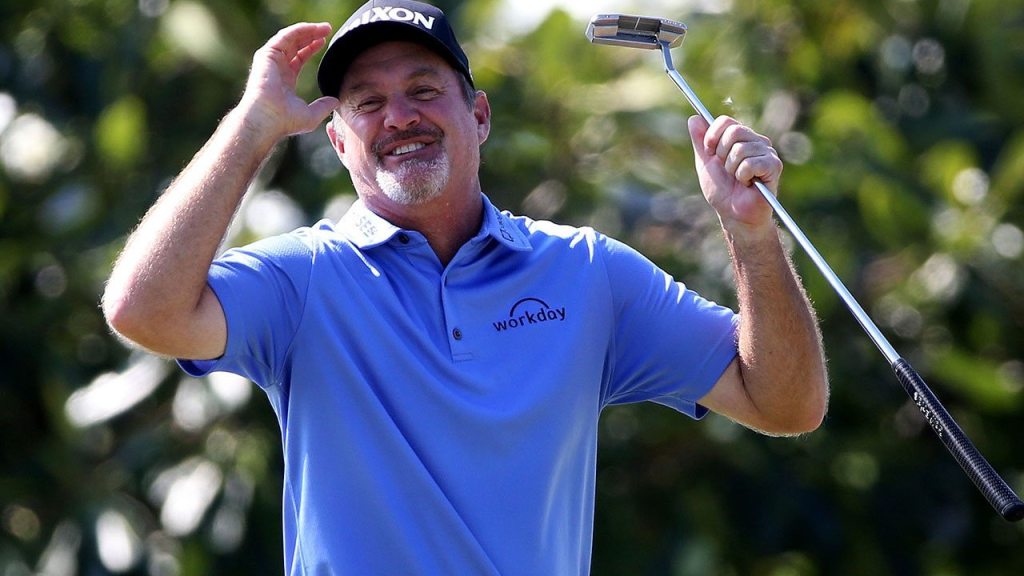 Jerry Kelly won the Senior Players for the second time in three years.

The Senior Players Championship came down to a Sunday battle between two buddies from Wisconsin — Jerry Kelly and Steve Stricker.

Kelly won this battle at Firestone with some clutch putts down the stretch — birdies at the famous par five 16th then another at 17 got him to the finish line in 11-under par, two shots better than Stricker.

This was Kelly’s second win at the major championship in the last three years.

Kelly closed with a 2-under 68, taking the outright lead with a 15-foot birdie putt from the fringe on 16 then he ran in another from 10-feet at 17.

“The first major is awesome, but the second one, even more validation,” Kelly said. “I’m really excited to go back to Sawgrass next March. That was a big piece of the desire in winning this tournament. That’s one of those great things that we have with our majors that we can get to go play at the high point of golf. I’m really excited about that.”

Kelly also won at Firestone in August 2020 and finished second last year. The Madison, Wisconsin native now has 10 wins on the Champions Tour.

“He made the putts when he had to coming down, and vice versa, I didn’t,” said fellow Wisconsin native Stricker. “That’s the difference. Not really what I had in mind, really,” Stricker said. “I was looking to come out on top of all this.”

Stricker missed a chance for his second major victory of the season after taking the Regions Tradition in May.

“He played great and he made the putts when he had to,” Stricker said about Kelly. “He made a nice putt at 13 for birdie and then I basically showed him the line at 16 and he made another great one at 17.”

Stricker wasn’t the only senior star Kelly had to hold off.  Schwab points leader Steve Alker was in the thick of it.  He finished tied for third with Ernie Els at eight-under thanks to a bogey on the 72nd hole.

“I just didn’t have it today,” Alker said. “I just made too many bogeys over the weekend. That was the difference.”

Tony Romo’s two-putt birdie on the second playoff hole earned him a third title at the American Century Championship.

All three birdied the par five 18th the first time around then Mulder and Pavelski got in trouble with their tee shots the second trip down 18.  Romo hit the green in two and two-putted for the win.

Mulder was on his way to winning for the fourth time but got derailed on the final nine holes.  He missed a three-foot bogey putt at the 13th and lost two points then bogeyed the fairly easy par five 16th and earned no points on what is normally a birdie hole for the best players.

Annika Sorenstam tied for fourth with NFL kicker Adam Thielen as both tallied 58 points.  Sorenstam bogeyed three of the four par threes on Sunday and that cost her a shot at a spot in the playoff.