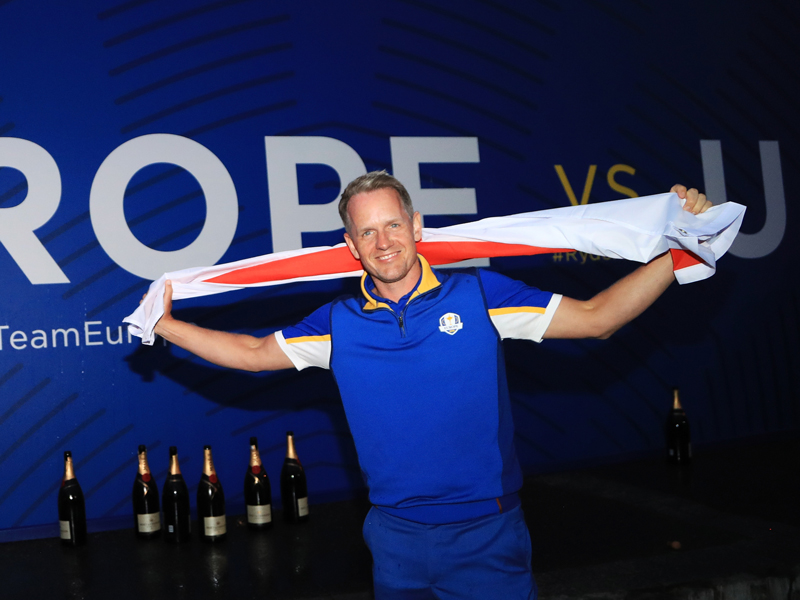 Luke Donald, a former world's No. 1, is expected to captain the Euros.

With Henrik Stenson getting the boot as the shortest-tenured European Ryder Cup captain, a familiar name — Luke Donald — has emerged as the frontrunner to replace Stenson.

Donald, a former world’s No. 1, is a logical choice — he’s worked as a vice captain twice.  When Stenson was named captain, Thomas Bjorn and Edoardo Molinari were named vice captains and they’ll remain in those rolls.

Donald is a four-time Ryder Cupper, last playing in 2012, and he’s served as a vice captain in each of the past two editions. So, should he indeed be named replacement captain, there shouldn’t be much of a learning curve.

In addition to Stenson, several other European Ryder Cup veterans have defected to the LIV exhibition series. including all-time points leader Sergio Garcia, all-time matches played leader Lee Westwood and Ian Poulter. While the DP World Tour and Ryder Cup Europe have yet to ban LIV players from the biennial matches, it’s assumed that the defectors will not be permitted to compete at Marco Simone Golf Club in 2023.

The 22-year-old South Korean put seven birdies, an eagle and one bogey on her scorecard and turned in a tournament-leading eight-under par 64 at the Women’s Scottish Open.

Choi is ranked No. 24 in the world.  She finished tied for sixth at the Great Lakes team event was tied for 22nd last week at the Evian.

World No. 4 Lydia Ko got off to a fast start and turned in a 65 along with Celine Boutier of France and American Lilia Wu.  England’s Georgia Hall was two back with a 66.  World No. 2 Minjee Lee posted 67 while top-ranked Jin Young Ko shot 70 and was tied for 32nd.

Lydia Ko climbed into the early second round lead on Friday with a second straight 65 that took her to 14-under par, two shots in from of Lilia Wu, who added 67 to her opening 65 and was 12-under.  First round leader Hye Jin Choi (l64) went out in the afternoon wave.

Down the street from the real St. Andrews you can find the Fairmont Hotel and it has it’s own course — designated Fairmont St. Andrews — site of this week’s Hero Open on the DP World Tour.

First round leader is American Sean Crocker, who put together a nifty nine-under par 63 on the links-like course.

It’s been a tough year for the 25-year-old Crocker — a lot of missed cuts but on Thursday, things went his way and he turned in his best-ever score on the DP World Tour.

“That was fun. I’ll be honest, I don’t get too many days like that on the greens.  It’s fun making putts, I’ll definitely say that, because I’m not used to it as much as some of these guys.”

Crocker said he learned a lot from his struggles.

“Nine missed cuts. Mentally that was the toughest thing I’ve gone through so far.  People speak about the mental side of sport but that’s probably the darkest I’ve been in life on a golf course.  It’s the first time I’ve had bad things happen to me on the golf course. And it’s just a case of having to grow up.”

He didn’t let it get to him.  “Just said to myself, ‘okay, you’ve been lucky to play good golf your whole life and now you’re going to get a taste of what this game is really like.  You just realize how hard this game is, and I realize that I can hit bad shots; I can do all the work and I can still hit bad shots.  There’s no point in getting upset.  Mentally it helped me out a lot. It showed me a lot of bad places on a golf course but it showed me, it opened my eyes to the game of golf.”

On Friday Crockett got out early before the winds picked up and added a six-under par 66 and he’s at 15-under, setting the 36-hole pace.

A sad chapter in the world of golf equipment — the Ben Hogan Company has closed.

The company has spent the last four months looking for a new investor after ExWorks Capital of Chicago went bust.  That venture capital firm financed what are considered higher risk ventures.

Golf equipment is one of them due to the lack of profit margin.

One of the costs for the Hogan Company was the licensing expense.  Rights to the name Ben Hogan are owned by the Perry Ellis apparel company.

The Fort Worth-based descendant of the original company Ben Hogan himself started in 1953 let its entire workforce go last Friday and has ceased operations.

“I don’t know if it’s permanent,” Hogan CEO Scott White said, “but I suspect it is.”