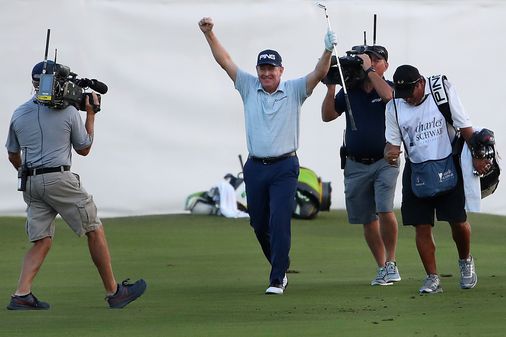 Jeff Maggert celebrates his eagle hole-out from 123 yards on the third playoff hole.

Things got a little hectic out in Phoenix Sunday.

After all, there was a lot on the line for the over-50 set — someone was about to be crowned Champion Geezer Of The Year — at the Charles Schwab Cup Championship.

First order of business was to see who would win the season-ending individual event on the PGA Tour Champions (aka Old Guys).

Jeff Maggert was nothing less than solid since last Thursday.  His opening 63 set the tone and he led all the way until the 72nd hole.

Retief Goosen was in he hunt for the Schwab Cup and he had points leader Scotty McCarron shaking in his Foot-Joys.  McCarron, who fell flat on his face in this season-ender, was in the cluhhouse after finishing in a tie for 21st in a field of 34 players.  Not a great way to finish.  Goosen, playing ahead of Maggert, birdied three of the final four holes at Phoenix Country Club to post a closing 64 that got him to 21-under par.

If Maggert couldn’t muster a birdie at the 72nd hole, Goosen would win the tournament AND the Charles Schwab Cup.

Maggert came through with that closing birdie and the playoff was set.

Both players parred the 18th their first trip down then both came up with birdies the second time they played it.  They moved to the par four 17th and that’s where Maggert’s Miracle happened.

Goosen had just stuck a wedge shot within 10 feet.  Maggert was looking at a shot of 123 yards and he hit a perfect wedge — two hops then into the bottom of the cup.

“I’ve seen it happen.  I never thought it would happen to me in my life,” Maggert said of his walk-off eagle two at the 17th, the third playoff hole.  “I felt bad for Retief.  I was just trying to get it close.  Lo and behold it went in.  A good ending and a jump start for next year.”

As for McCarron, he didn’t do much on the senior tour since June and basically continued that theme throughout the playoffs and finally backed into the overall title.