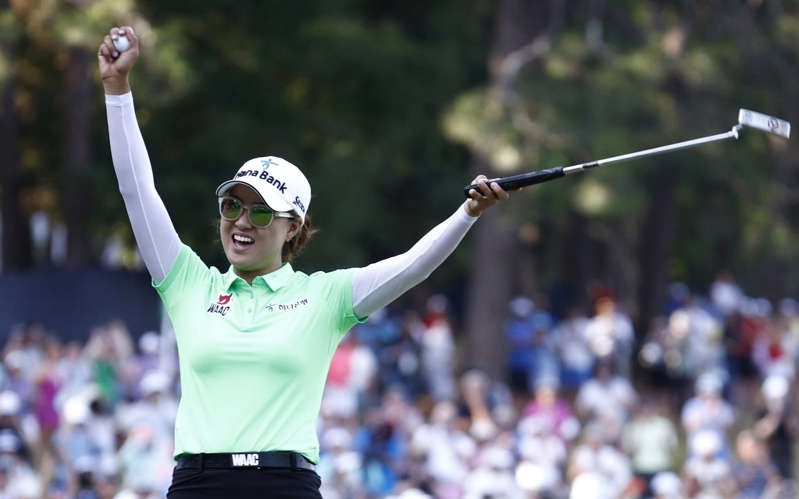 This 77th edition of the Women’s U.S. Open belonged to no one else but Minjee Lee.

The Australian star saw to it by shooting 200, a U.S. Open record for 54-holes on Saturday then she closed the big deal on a sunny Pine Needles Sunday with a clinical display of shot-making and putting that left little doubt who the best player was over the span of four difficult days.  Lee’s closing 71 probably should have been a 70.  Her only gaff on a long day came with just three-feet between her and a five-shot victory.  She missed that putt but it mattered little.

That closing bogey was good for even-par 71 and a 72-hole record for the event — 271 strokes — one better than any woman had accomplished in the long, storied history of this event.

“This is the one I wanted to win ever since I was a little kid,” Lee said after bagging her second major championship and her eighth career victory.  She was cool, collected and extraordinarily impressive right off the bat as she went birdie-birdie out of the starting gate, sending a message that this one belonged to the world’s fourth-ranked player and no one else.

“Super special,” was how Lee described her feelings as she became the first woman to earn $1.8 million in a major championship, or any championship for that matter as the USGA made a major step forward for the women’s game, recruiting Work Day to help pony up the $10 million overall purse.

It wasn’t much of a stretch to see Lee winning this one after she went out and shot rounds of 67-66-67 for the first 54 holes to set the scoring mark for three rounds.  It would have been asking too much for Mina Harigae to chase down a major champion when in fact, Harigae had never won on the LPGA Tour.  Harigae came into the season’s second major ranked 52nd in the world and after opening with 64, she hung around for the next 36-holes and played well enough to get into double-figures under par.  At 10-under, she started three back of Lee but Lee made it clear from the start there would be no catching her.

Fact is, the USGA basically guaranteed that no one would come roaring from behind the way Johnny Miller did in the men’s championship in 1973.  No, Pine Needles was a tough nut to crack on Sunday as the greens reached their peak of firmness and only two players in the field shot under par.  Hyejin Choi shot 70 and that boosted her into solo third while Jeongeun Lee6, winner of the 2019 U.S. Open, was the only player to break 70.  The 69 she put on the board earned her nothing more than a tie for 28th.

Give Harigae a lot of credit.  She knew the task of chasing Lee was futile but second place in this one was huge — $1,080,000 worth of huge and Harigae held it together nicely down the stretch.  A birdie at the 15th then three straight pars got her in at nine-under and she became the first LPGA Tour player to win a seven-figure check without winning a tournament.

“I’m not gonna lie, my stomach was hurting over the last couple of holes,” she said with a big smile.  Finishing second to Lee was nothing to hang one’s head about and the million bucks was a great consolation prize.

As the shadows grew long over the Sandhills, Lee collected her gold medal and the big silver trophy.

“I’m speechless,” Lee said as she prepared to hoist that trophy.

Minjee Lee put on a record performance and looked every bit the part of a major champion.

And that $1.8 million was pretty sweet too.

Here’s What The Top 10 Earned: