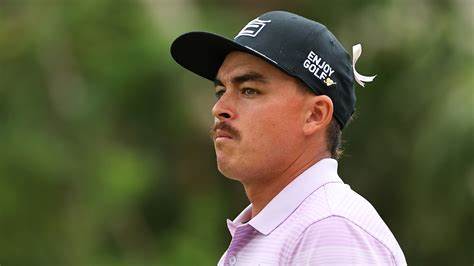 Despite what his cap reads, Rickie Fowler isn't enjoying golf much these days.

A total of 8,800 players signed up, paid and began the qualifying process for the 2022 U.S. Open this spring.

On Monday, it all came to a finale (almost) as 871 players went after just 65 spots in next week’s third major of the year.

Of those 8,800, 530 made it to the final qualifying locations.  The 871 number came from 341 who were exempt from local qualifying.  Biggest name who didn’t make it on Monday — Rickie Fowler.

Rickie was teeing it up at Admiral’s Cove, which is just a few minutes from his luxurious river-front mansion.  Alas, Rickie couldn’t cut it which give a hint as to why he’s falling in the world rankings and hasn’t cracked an egg on the PGA Tour this season.  Ryan Gerard and Sean Jacklin, son of 1970 U.S. Open winner Tony Jacklin, led the four qualifiers at five-under par.  Keith Greene was alone at four-under and University of Florida golfer Frank Biondi from Brazil, took the fourth spot at three-under par.

Rickie’s rounds of 73-67 left him a shot short of a playoff and shows the sad fact that he couldn’t beat four non-PGA Tour players and a college golfer.

In Other Qualifying Action:

The Canadian qualifier at Rattlesnake Point GC  — Jonax Blixt was the medalist.  PGA Tour rookie Callum Tarren and Japan’s Satoshi Kodaira also made it through.

At Springfield Country Club in Ohio, Ohio State golfer Maxwell Moldovan and Illinois University’s Adrien Dumont de Chassant were amateurs who made it.

In Massachusetts, 57-year-old Fran Quinn will be the oldest player in this year’s field at The Country Club.  He made got through in an 8-for-3 playoff at Old Oaks CC along with Stanford’s Michael Thorbjornsen and Brandon Matthews.

The most spots were available at the Columbus site, where most PGA Tour players entered.  Chan Kim tied Lanto Griffin for medalist honors.  Texas A&M All-American Sam Bennett was the lone amateur to get through at that site.

Players who made it via the 2022 European Qualifying Series included:

No. 1 points-earner Victor Perez, of France; No. 2 Ryan Fox, of New Zealand; No. 3 Thorbjorn Olesen, of Denmark; No. 4 Sam Horsfield, of England; No. 5 Sebastian Soderberg, of Sweden; No. 6 Kalle Samooja, of Finland; No. 7 Wil Besseling, of Netherlands; No. 8 Yannik Paul, of Germany; No. 9 Richard Mansell, of England; and No. 10 Marcel Schneider, of Germany.

Tiger Woods Still On the Mend, Passes On Next Week’s U.S. Open:

It came as absolutely no surprise Tuesday when Tiger Woods said he won’t be playing next week at the U.S. Open.

It’s a huge field and not conducive to the amount of time Woods needs to prepare for a single round.  He got exposed by the early-late then early time at the PGA and the Saturday weather in the early morning didn’t help either.

Weather is always a guessing game at the Open Championship and that’s where Woods has his focus — St. Andrews.  He said he’d play there when he was competing at The Masters in April.

So hopefully the weather and tee times fall the right way for El Tigre in July.

The Chevron Has A New Venue And Date:

Now that the LPGA Tour has bid farewell to it’s old venue for its first major of the season, the old “Dinah Shore” is now The Chevron and it has a new date and new course.

The Tour announced this week that the Chevron Championship will now be held at Carlton Woods in Houston. The tournament had been staged at Mission Hills in Rancho Mirage, California, since it began in 1972. Jennifer Kupcho won this year’s event and took the final leap into Poppie’s Pond.

The 2023 event will be contested April 20-23, two weeks after the Masters. For years the Chevron has led into the first men’s major of the year.

During the U.S. Open, Danielle Kang revealed that she has a physical health issue — a tumor on her spine.

She’s taking time off from the LPGA Tour for treatments and diagnosis.  Kang will undergo additional procedures and tests to determine treatment options and to learn whether the tumor is malignant or benign.