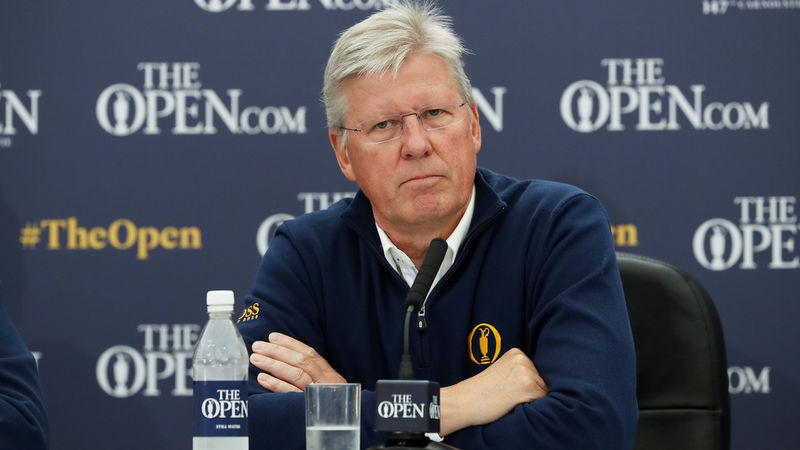 Martin Slumbers from the R&A had tough words for the LIV series.

The Royal and Ancient, one of the world’s two governing bodies for the sport of golf, has taken a hard stance when it comes to the upstart LIV exhibition series.

R&A Chief Executive was pretty much to the point this week at the 150th Open Championship.

“Professional golfers are entitled to choose where they want to play and to accept the prize money that’s offered to them. I have absolutely no issue with that at all. But there is no such thing as a free lunch,” Slumbers said. “I believe the model we’ve seen at (London’s) Centurion and (Oregon’s) Pumpkin Ridge is not in the best long-term interests of the sport as a whole and is entirely driven by money. We believe it undermines the merit-based culture and the spirit of open competition that makes golf so special.”

So much for the Greg Norman proclamation that his league is “good for the game.”

And that “growing the game” claim by Norman and his minions is balderdash, per Slumbers:

“I would also like to say that, in my opinion, the continued commentary that this is about growing the game is just not credible and if anything, is harming the perception of our sport which we are working so hard to improve,” Slumber opined.

Slumbers hasn’t hammered the LIV players but said the R&A will take hard look at future exemptions into the Open Championship.

“We have been asked quite frequently about banning players. Let me be very clear. That’s not on our agenda,” Slumbers said. “But what is on our agenda is that we will review our exemptions and qualifications criteria for the Open. And whilst we do that every year, we absolutely reserve the right to make changes as our Open Championships Committee deems appropriate.

“Players have to earn their place in The Open, and that is fundamental to its ethos and its unique global appeal<” Slumbers added.  “We will hold totally true to the Open being open to anybody. But we may well look at how you get into that, whether it’s an exemption or a need to qualify through our qualifying process.”

The LIV exhibition series has applied to the committee for the Official World Golf Rankings.  Slumbers is a voting member of that committee.

If the names Pauline Roussin and Dewi Weber don’t sound very familiar — don’t worry.  They are two unheralded rookies on the LPGA Tour but they have stepped into the spotlight at the halfway mark of the the LPGA Tour’s team event — the Great Lakes Bay Invitational.

Roussin is from France, Weber from the Netherlands.  They’ve found perfect team chemistry.  After shooting 65 in the alternate-shot format on Wednesday, they shot a nine-under par 61 on Friday — boosted by Roussin’s hole-in-one at the par three seventh at Midland Country Club.

“We’re just going to do more of the same,” Weber said. “I know that sounds so boring and I’m so sorry for that, but we’re just going to keep doing what we’re doing. I think what we’ve been doing has been working really well.”  The two didn’t know each other before this week.  “We both last minute happened to be looking for a partner,” Weber said. “I knew her game a little bit. I knew she was quite fun to be around, so I just texted her and said, `Hey, I heard you’re looking for a partner.'”

At 16-under par, they were five clear of the second place team of Jennifer Kupcho and Lizette Salas.  Kupcho and Salas added a 61 Thursday to their opening 68.

The pre-tournament favorites — Nelly and sister Jessica Korda — found themselves eight shots off the lead after rounds of 69-63.

Friday’s third round format is alternate shot the final round on Saturday will be best-ball.

Mark Hubbard and Charley Hoffman set the opening day tone at the Barracuda Championship as both finished the first round with 13 points in the modified stableford system event.

Brice Garnett, Sean Crock and Aaron Cockerill were a point behind at plus-12.